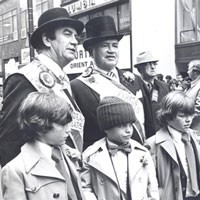 Hugh Carey (1919 — 2010) led a remarkable 20th century life: child of the Depression, WWII war hero, United States Congressman, two term governor of New York, husband to his college sweetheart, father of fourteen children. It was a full productive life with a unique vantage point on the political pulse of New York at the grassroots level. Inspired by John F. Kennedy's candidacy, he conducted his first campaign as a distinct underdog in 1960 Brooklyn, with little more experience than the desire and ambition to beat the incumbent. Securing the upset in the closet Congressional race of that year, Carey began a political career that spanned several decades and is best remembered for saving New York from plunging over a fiscal cliff in the 1970s. In 2009 Peter Quinn, the governor's former speech writer, sat down with his old boss to discuss his career. Peter captured the governor's thoughts on local, state, and national politics from his perspective as a product of the Brooklyn Democratic Party. It's a frank look at the grassroots politics that the Irish excelled at and suggests that despite great social and cultural change, the game of getting out the vote remains the same.