The Next Step: The Evolution of Irish Dancing in America 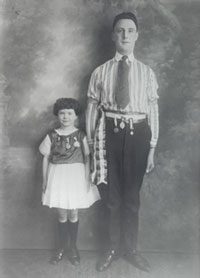 Every immigrant group that travels to a new country brings with it more than the clothes on their backs or the personal belongings in their suitcases. They bring with them the customs and culture of their race, community, and nation. The Irish are no different. Arriving to the North American continent and the Caribbean as early as the 1600s the Irish brought a lively culture that included their unique facility with words, the gift of story-telling, and a love for music and dance. Four hundred years and seven million migrants later, the influence of Irish culture is still felt in America. In particular, the popularity of Irish dance is stronger than ever among Irish-, and non-Irish, Americans alike.

For generations, Irish dancing remained a local pursuit, enjoyed recreationally among the Irish and Irish- American communities that developed across America. With the Gaelic Revival in the late nineteenth century, dance instruction became more formalized and dance competitions emerged to promote and also preserve the integrity of the art form. Irish dance is perhaps alone among the cultural imports that remained closely tied to the home country because the dance masters in Ireland remained the final authority on steps, style, and choreography. To win a dance competition in Ireland was to be judged among the elite Irish dancers in the world.

By the end of the twentieth century, young Irish-American dancers like Jean Butler and Michael Flatley were among the elite Irish dancers who were proficient in the art form, but also seasoned performers.

When they appeared in the seven-minute Interval Act of the Eurovision talent contest on Ireland’s RTE television network in 1994 called Riverdance, they thrilled Irish and European viewers with their dynamic choreography and Bill Whelan’s fresh musical score. Riverdance became an international phenomenon and pushed what had been a parochial pastime to a level of popularity that broke ethnic barriers and created commercial and artistic opportunities for artists, teachers, choreographers, costumers, and producers alike. It was the perfect marriage of Irish art and American showmanship.

On Sunday, June 17, 2012, at Wolf Trap Foundation for the Performing Arts in Vienna, VA, the North American touring production of Riverdance will play its final performance sixteen years after it opened in New York in March 1996.

The legacy of Riverdance is incalculable. Like the millions of immigrants who left the tiny island in the middle of the North Atlantic for the new world, it has carried Irish culture to new lands, bringing recognition back to the homeland and joy to performers and audiences.

All of the interviews used in this podcast are drawn from the Archives of Irish America at New York University and have been recorded as part of the Glucksman Ireland House Oral History Project with the exception of Bill Whelan, whose comments are excerpted from his Irish Institute of New York Lecture held at GIH on October 15, 2009