Enjoying the Ride: The Irish in the NYC Horse and Carriage Industry, Then and Now 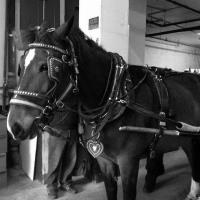 In 2014 horses made big news in New York City, when the city’s new mayor, Bill DeBlasio, promised to disband the horse and carriage industry in Central Park as his first order of business. His pronouncement set off a storm of controversy with heated pushback from horse drivers and stable owners, many of them Irish, who protested their portrayal as abusers of animals. They defended their industry and its practices as ethical and a culturalstaple of the city, not only for tourists, but for the local population as well. Dating back to the mid-nineteenth century (and before) horses provided the power for public and commercial transportation, building, and sanitation as well as private transportation and recreation.No longer powering the machinery that makes the city work, horses are still a presence on the streets of Manhattan pulling carriages and carrying mounted police officers. The Irish, then as now, brought their equine experience with them from farms and rural villages and found a natural fit working with horses as owners, drivers, and farriers in New York. We’ve talked with members of the carriage industry and Hilary Sweeney to discuss the history of the Irish connection with horses and found that while much has changed, much in the business remains the same.

Photo Credits:
A horse is prepared to begin his day at Clinton Stables on West 52nd Street in Manhattan. Photo courtesy of Michael Stallmeyer.