Legalize The Irish: The Legacy of the IIRM

In May 1987 a group of Irish and Irish American activists gathered in Queens, New York City to discuss the documentation status and consequent problems of thousands of young Irish immigrants, known as the New Irish, in the city. A series of legislative, social, and political actions in the United States and Ireland unfolding since the 1960s collided in the mid-1980s to create a situation where the Irish leaving home for America entered the country as tourists, overstayed their visas and worked and lived as illegal aliens in established Irish-American neighborhoods. The activists reached out to the established ethnic leadership in the city for help and dissatisfied with the response formed the Irish Immigrant Reform Movement. Their sole agenda was to effect legislative change in Washington that would reverse the out of status predicament so many immigrants faced.

Their goal was admirable, seemingly impossible, and accomplished by the close of the 1990 Congressional legislative session. It is an incredible story. Twenty-five years after the seeds of the IIRM were sown, we have gathered the thoughts and reflections of some of the principal leaders of the group.

Since their victory, Ireland and the United States have experienced continued social, economic, and political stress, and immigration continues to be a topic of great debate in both countries. As we enter the second decade of the 21st century it is important to look back at the singular focus and commitment of the IIRM at the end of the 20th century and consider their place in the continuum of Irish and American relations. 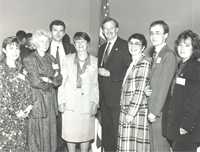