* 19 University Place is an accessible building with gender-segregated restrooms.

Ambassador Brewster will take you through a journey of his time as Ambassador filled with controversy and how tough conversations create a platform for change.  His dynamic experience as a C-Suite executive, diplomat, defender of human rights and pride of who he is as a person created a background to approach tough situations in an effective way.  The Ambassador and his husband impacted a church, governments, and societies.  He will provide you with opportunities to determine how you can elevate tough conversations to achieve success beyond your wildest dreams.

Ambassador Brewster has a keen insight into the changing minds of consumers and cultural dynamics around the world as they relate to international business, politics, and development. Named in 2016 as one of Foreign Policy’s 100 Global Thinkers, he is a proven innovator and leading expert in the areas of international political and business strategy, diplomacy, crisis communication, global retail and product development, consumer evolution, market intelligence, positioning, and branding.  In addition, he is a strategist in organizational design, internal/external communication, e-commerce, and innovation.

Currently, he is CEO at Insignias Global, a political and brand development advisory firm.  Insignias Global clients include top international brands, governments, and political leaders. He most recently served under President Barack Obama as United States Ambassador to the Dominican Republic from November 26, 2013, to January 20, 2016.  He led the strategy for an Embassy of over 1000 employees representing all branches of government.  His appointment made history as the US first openly gay Ambassador in the Western Hemisphere alongside his husband Bob J. Satawake.  Ambassador Brewster is credited with advancing the human rights of over 300,000 stateless Dominicans and migrants of Haitian descent through dedicated work with multiple governments.  His political and strategic expertise is credited for exposing corruption and advancing the rights of the marginalized and changing the landscape of equality in Latin America.  His policy expertise and key negotiating skills led to many historic agreements including a new extradition treaty, the first in over 100 years, a SOFA (status of forces agreement), the first in Latin America, advancements in environmental laws, indictment of corrupt foreign officials, trade policy, international immigration laws and enforcement of drug policies against international drug cartels.

The Ambassador holds top security credentials and his relationships with government and business leaders around the world is significant.  As an expert in Latin America and Caribbean business and politics, he has moved forward trade between the US and countries in the Western Hemisphere.  His knowledge of NAFTA, CAFTA, HELP, and HOPE in addition to Foreign Corrupt Practices Act and trade policy has made the Ambassador a go-to for international companies and leaders of foreign governments.  The Ambassador promotes democracy around the world meeting with leaders in Western Europe and Latin America. He serves on the advisory boards of the Parliamentarians for Global Action (PGA), National Democratic Institute (NDI) and The Atlantic Council.

Prior to his position as U.S Ambassador, he was managing partner of SB&K Global, an executive strategy firm specializing in consumer dynamics, political and human rights advocacy and reputation management.  In addition, he was a 20-year executive with General Growth Properties, the world’s second largest shopping center REIT, serving multiple positions including SVP, Marketing and Communications, and an officer of the company.  As part of the executive team, he led multiple multi-billion dollar acquisitions and the largest and most successful real estate bankruptcy in US history.

An avid believer in democracy, human rights, and animal advocacy, he served President Obama as LGBT National Co-Chair of Obama for America, National Co-Chair of Obama Leadership Circles, member of the National Finance Committee and a Presidential Partner.  He is a leading fundraiser for multiple Democratic Senate and House candidates nationally. Currently, he also serves on the Board of the SPCA of Texas and the former national board of the Human Rights Campaign.  He has received multiple awards domestically and internationally for his business and advocacy work. 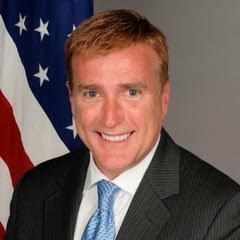