The IFS mourns the death of our beloved friend Jackie Simon, who left us on August 10, at home, at the age of 98. She had been diagnosed with cancer last year and receiving treatment, which ultimately proved exhausting. These past weeks, as she came to believe that she would not be around much longer, she had meaningful conversations with many friends, including faculty and staff at the IFS. She told us she was at peace with her impending death. To quote Frédéric Viguier, Jackie “was able to say her goodbyes to several friends, and she did so à la Jackie -- with love, intelligence and style.”

I find it so difficult to define Jackie’s deep and lasting contribution to the IFS. None of the ordinary labels — professor, lecturer, adviser, staff — fit although she did teach some years ago, after obtaining her Ph.D. in political science from NYU. She held the title of Senior Visiting Scholar since 1984, but, for the past twenty years at least, she has served as a life coach and in-house sounding board, a perpetually available source of professional, intellectual, institutional, and personal advice. Astute students understood soon after arriving on the Mews that this elegant, razor-smart, wise woman would take an interest in their lives, their research, and their professional futures, and then support them in whatever way she could. Jackie has mentored countless IFS students, notably in her chosen field of political journalism (she was U.S. Bureau Chief of Politique internationale, wrote for Harper’s and other publications, and served as Governor of the Overseas Press Club). They found in her a guiding hand and a kindred soul, a woman who made herself available even as she did not mince words.

In recent years, Jackie created a new IFS ritual in her beautiful apartment, the springtime graduation dinner, with passed hors d’oeuvres (including the deviled eggs she made herself), boeuf bourguignon, wine à volonté, and so much good cheer. Like others, I was the recipient of Jackie’s human generosity. She provided emotional support when family tragedy hit and remarkably useful advice (and equally useful gossip about the history of the IFS) when I became director. Most of all, Jackie showed me, as she showed all of us, how to lead a good life, curious about the world and the lives of others. Not long ago, she told me that life had given her all that she could expect, and that she in return had given others as much as she could. Her life, she added, was complete. The IFS will miss Jackie dearly, and honor her at an opportune time later this year. 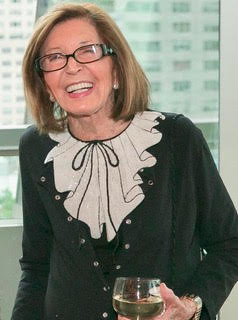