This event will be in-person and on Zoom.

RSVP is required for in person attendance and for a Zoom and event updates. 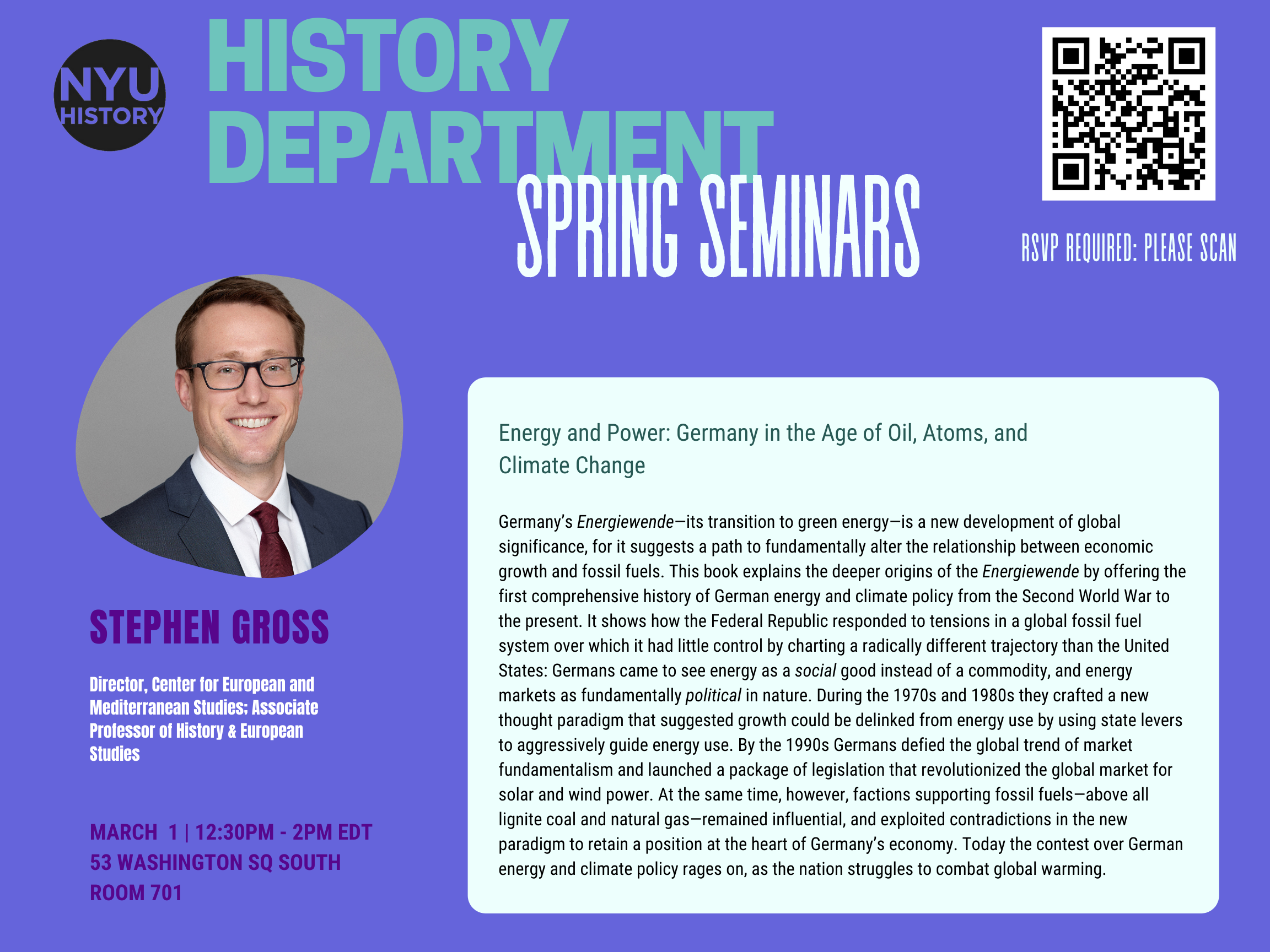 Abstract: Germany’s Energiewende—its transition to green energy—is a new development of global significance, for it suggests a path to fundamentally alter the relationship between economic growth and fossil fuels. This book explains the deeper origins of the Energiewende by offering the first comprehensive history of German energy and climate policy from the Second World War to the present. It shows how the Federal Republic responded to tensions in a global fossil fuel system over which it had little control by charting a radically different trajectory than the United States: Germans came to see energy as a social good instead of a commodity, and energy markets as fundamentally political in nature. During the 1970s and 1980s they crafted a new thought paradigm that suggested growth could be delinked from energy use by using state levers to aggressively guide energy use. By the 1990s Germans defied the global trend of market fundamentalism and launched a package of legislation that revolutionized the global market for solar and wind power. At the same time, however, factions supporting fossil fuels—above all lignite coal and natural gas—remained influential, and exploited contradictions in the new paradigm to retain a position at the heart of Germany’s economy. Today the contest over German energy and climate policy rages on, as the nation struggles to combat global warming.

Professor Stephen G. Gross is jointly appointed in the Department of History and the Center for European and Mediterranean Studies at NYU. After working for several years as an economist at the Bureau of Economic Analysis in Washington DC, he completed his Ph.D. at UC Berkeley where he subsequently lectured with the International and Area Studies Program. In his research and teaching, Dr. Gross is interested in 20th century Germany, European unification, European and international political economy, energy policy, and international relations. Dr. Gross' first book project—Export Empire: German Soft Power in Southeastern Europe, 1890–1945—explores the relationship between imperialism, economic development, and cultural exchange from the perspective of non-state actors such as trade fairs, research institutes, and professional exchange programs. He has also published on a variety of economic themes in German and European history in Central European History, Contemporary European History, German Politics and Society, and Eastern European Politics and Society, as well as in various book chapters. Dr. Gross currently serves as the Director of the Center for European and Mediterranean Studies.