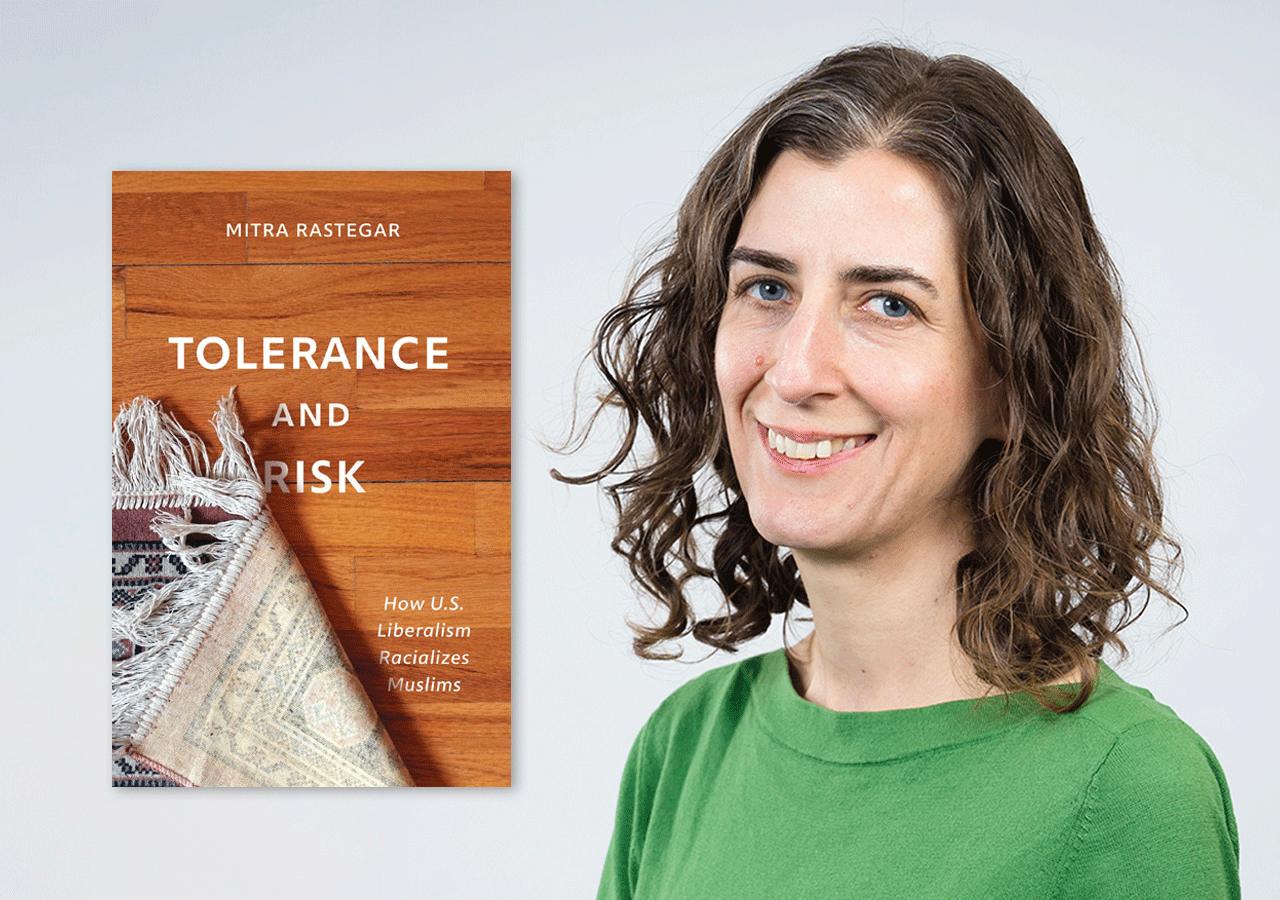 In the decades since 9/11, Muslims have gained an increased presence in American life. The US Muslim population has grown steadily. The number of mosques in the US has more than doubled. Four Muslims have been elected to the US House of Representatives, and three are currently serving. One of TV’s most popular and critically-acclaimed series is “Ramy,” which centers on a Muslim, first-generation Egyptian-American grappling with family and faith.

This increased presence of Muslims in American life has not led to a corresponding increase in understanding, many say. A majority of Americans report they don’t know any Muslims, and that they know very little about Islam. Yet Americans do hold views about Muslims, and these views are polarized along political lines.*

Mitra Rastegar, a clinical associate professor for Liberal Studies at New York University, writes about American perceptions and representations of Muslims in the post-9/11 era in her book Tolerance and Risk: How U.S. Liberalism Racializes Muslims (University of Minnesota Press, 2021). Through case studies across a range of events, people and populations, she explores the underlying assumptions and expectations against which Muslims are deemed worthy (or unworthy) of tolerance and sympathy. She is particularly interested in liberal representations and perceptions of Muslims.

The book poses a provocative question. Representing Muslims as tolerable and sympathetic may resonate with liberal values of inclusivity and multiculturalism, but do these representations actually promote tolerance for Muslims in all their diversity?

Arts & Science talked with Rastegar about the issues her new book raises, and how her personal history helped formulate the focus of her scholarship.

Your argument that liberal values of tolerance, sympathy and multiculturalism can actually serve to reinforce the racialization of Muslims may seem paradoxical to those who espouse these values. Can you explain your reasoning?

Coming to the US from Iran in the early 1980s, soon after the hostage crisis, I was used to Iran and Iranians being portrayed in US media as backward and dangerous. After 2001, I was struck by a new type of interest in Muslim Americans and in the SWANA (South West Asia and North Africa) region. While much of the attention was explicitly tied to surveillance and policing, there also was curiosity, a desire to counter hate crimes, and an interest in interfaith understanding. So my analysis begins with that post-9/11 period and considers how sentiments of tolerance and sympathy towards Muslims are animated in various arenas over the next two decades.

My first chapter analyzes the 60-plus human-interest stories on Muslim and Arab Americans published by the New York Times after 9/11, finding that even as these stories portray a remarkably diverse range of individuals and communities, they also articulate a set of questions necessary to determine the acceptability of Muslims. More broadly, I find that discourses of tolerance and sympathy offer new images of Muslims, but still approach them through the lens of “Orientalist” stereotypes of Muslims as irrational, anti-modern, and violent. Images of Muslims as patriotic Americans, empowered feminists, LGBTQ people, and sympathetic refugees contrast with stereotypes of fundamentalists and terrorists, but the stories repeated still reinforce a notion that Muslims as a population have a distinct set of problematic characteristics. Put briefly, these representations exceptionalize “good” Muslims, uncritically attach stereotypes to “bad” Muslims, and use stereotypes as assessment tools against which all Muslims are actively measured, thereby constructing Muslims as a racial population.

Your book describes the “narrow space that Muslim-Americans must navigate to maintain their acceptability.” How do you define that narrow space?

Muslim Americans have had to fit within a very narrow script in order to avoid any association at all with negative stereotypes of Muslims. One dynamic I note is that powerful stories about sympathetic Muslims -- such as the story of Malala Yousafzai, the Pakistani education activist who was shot by the Taliban – have been used to produce a bogeyman representation in which certain characteristic seem to go together for Muslims: misogyny (and homophobia), religious puritanism, anti-Americanism, and “barbarism.” As a result, any Muslim deemed even slightly sexist, homophobic, publicly religious, or aligned with the politics of Muslim-majority societies can be quickly cast as potentially dangerous, regardless of how “moderate” they otherwise appear. As we know, the same does not apply to sexist, homophobic, or publicly religious Christian White men.

One of my case studies focuses on a controversy surrounding plans to build a dual language Arabic-English public school in Brooklyn, NY, spearheaded by a Muslim-American principal, Debbie Almontaser. What was remarkable was how Almontaser, whose career, military family, and interfaith work epitomized the liberal ideal of a moderate, patriotic Muslim American, was quickly recast as a threat, losing allies, and being forced to resign. The loss was not only to her professional ambitions, but to the communities the school was created to serve. So that space of acceptability has been both narrow and precarious. That said, this is shifting ground, and today we see people like Representatives Ilhan Omar and Rashida Tlaib bravely staking out political positions that have long been taboo for Muslims—including critique of US imperialism and US support of Israel—actively pushing against this narrow space of acceptability, while also facing severe backlash from people across the political spectrum.

The plight of Afghan women under Taliban rule has been covered extensively in American media. Do you see the arguments you make in your book reflected in this discourse?

As I just mentioned, sympathetic representations of Muslim victims in Muslim-majority societies are central to the dynamics of racialization I describe. While these representations may note that violence is not rooted in Islam per se, they instead blame an incomprehensible ideology somehow connected to Islam, and disconnected from historical, political and economic forces. Violence by Islamists of various cloths is cast as irrational and barbaric, and never compared to the violence of US forces and their allies. The shooting of Malala has become fodder for memoirs, documentaries, and children’s books. In contrast, the many documented deaths of Pakistani and Afghan children due to US drone strike, including under Obama’s leadership, have not been narrativized in any comparable way. We may shake our heads at those deaths, but are we ever asked to really feel them, or to think of the perpetrators as comparable to the Taliban?

The failure of the US to fulfill the mission declared in 2001 of “saving” Afghan women is not the story of US withdrawal from Afghanistan and ensuing Taliban victory, but rather the entire story of the US occupation. Anand Gopal’s impressive and unusual New Yorker article, “The Other Afghan Women,” tells this history from the perspective of rural Afghan women, demonstrating that even as the Taliban often did not have the active support of these communities, that all told, the US and its allies have wreaked much more violence and havoc in the lives of these women. The very real stories of women in Kabul who fear losing their freedom of movement, education and work, are important, but do not give us the full picture of the US role relative to Afghan women. We need to also listen to the stories of rural Afghan women, which challenge us to foreground US responsibility over the last two decades.

Your book offers hope for reimagining Muslim antiracism. What do you see as a framework for understanding Muslims in diverse communities in the US, and in societies around the world?

As your question acknowledges, there is no singular or coherent identity, experience or perspective that all people identified as “Muslim” share. So in some ways, I hesitate to even speak of “understanding Muslims” which seems to imply a coherence to the category that I would want to unsettle.  Recognizing the enormous diversity of experiences and perspectives of Muslims as individuals and communities is a necessary starting point, but I find that even those representations that seem to present new perspectives often reinforce old binary paradigms of Islam vs. the West.

The main implication of my analysis is that we need to actually engage difference more deeply, substantively, and with an open mind. This requires learning the histories, economies, and politics of Muslim-majority societies we are engaging. We also need to not fall into common analytical traps, for example in analyzing Muslim-majority societies through a framework of religious determinism, or in making assumptions about the distinct nature of violence tied to religion. We also need to more fully understand the role of the US and its allies in Muslim-majority societies, and to confront the many forms of violence in which the US is implicated, and which sustain anti-Muslim racism. For those of us located in the US, I would argue our first responsibility is to violence—such as surveillance and policing of US populations and US militarism and imperialism globally—which is done by a state with immense power and resources, and justified in our name.  Where I see hope is in the many people who are speaking out on these and related issues, refusing to abide by narrow parameters of acceptability, and creating space for others to do so as well.

*Demographic and public opinion information in this section from Pew Research Center.