The Revealer, a Publication of Arts & Science’s Center for Religion and Media, Wins Multiple Awards from Religion News Association 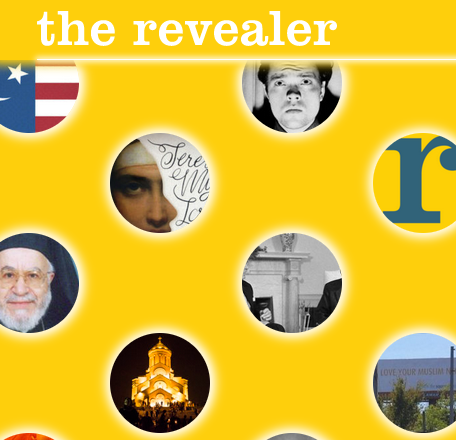 The Religion News Association (RNA), the country’s largest professional organization for religious journalism, recognized the Revealer with several awards including the top prize, Excellence in Magazine Overall Religion Coverage, on October 7, 2021. Three Revealer writers: Kaya Oakes, Tia Noelle Pratt, and Rebecca Epstein-Levy, swept all three awards in the Excellence in Religion Commentary category, and in its inaugural year, the Revealer Podcast was a finalist for Excellence in Podcast Religion Reporting.

Published online by Arts & Science’s Center for Religion and Media since 2013, the Revealer explores religion in society and people’s lives, bringing a wide lens and nuanced perspective to the way religion shapes, and is shaped by, race, sexuality, gender, politics, history and culture. The publication aims to increase public understanding by offering greater context on topics covered elsewhere.

In presenting the top honor to Revealer editor Brett Krutzsch, the RNA awards jury highlighted the value of this approach. Referring to a special issue from March 2020, “Religion and Sex Abuse Within and Beyond the Catholic Church,” the jury commented that the Revealer “succeeds in taking the much-scrutinized topic of clergy sexual abuse in the Catholic Church and extending the analysis to similar improprieties found in other diverse religious institutions. The Revealer mines new unexplored territory in the sadly continuing tale of sexual misconduct committed by those most trusted to lead and protect those who are most vulnerable.”

Krutzsch holds a Ph.D. in Religion and teaches in the Department of Religious Studies. He is a scholar of religion, LGBTQ history, and sexuality in the United States and author of the book Dying to Be Normal: Gay Martyrs and the Transformation of American Sexual Politics (Oxford University Press, 2019), a 2020 Lambda Literary Award Finalist for best LGBTQ nonfiction book of the year. His writing has appeared in several scholarly journals as well as the Washington Post, Newsday, and the Advocate, and he has been featured on NPR.

Krutzsch serves as Coordinator for the Center for Religion and Media, a joint project of the Department of Religious Studies (Angela Zito, Chair) and the Center for Media, Culture, and History (Faye Ginsburg, Director). Zito (Religious Studies and Anthropology) and Ginsburg (Anthropology) co-direct the Center, which stimulates innovative research and teaching in the interdisciplinary study of religion, especially at the nexus of religion and the mediations of social life. The Center interfaces with scholars, journalists and the public through the Revealer, which is published ten times per year, and the monthly Revealer Podcast, hosted by Krutzsch.