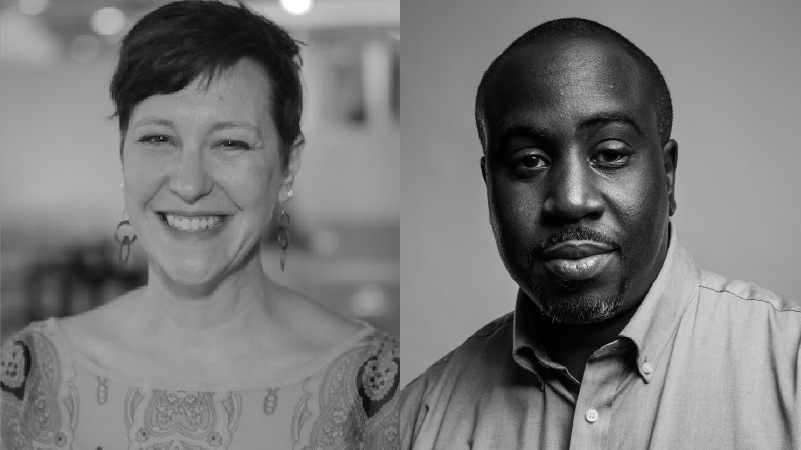 Ellen Horne, an executive producer for Radiolab and Audible who went on to found Story Mechanics, and Chenjerai Kumanyika, who has contributed to a range of influential audio work including co-producing and co-hosting the Peabody Award-winning podcast Uncivil, have joined the Arthur L. Carter Journalism Institute at NYU Arts & Science.

Accepting applications now for a launch in fall of 2023, the concentration is the first of its kind in the nation. Led by a full time tenure-track faculty focused on audio reporting, the robust graduate level curriculum with wide-ranging audio-focused courses is set within a premiere journalism program.

“When I began my career in audio, this would have been the ideal program for me,” said Horne. “With equal focus on rigorous journalism, technical production skills and creative cultivation, we will prepare adventurous, courageous, fact-based audio journalists who can make the next evolution of great podcasts.”

Robert Boynton, Director of Literary Reportage at NYU Journalism, led development of the new concentration. “Podcasting is one of the most dynamic areas in contemporary journalism, and increasingly, the visible face of leading journalism outlets,” he said. “This accessible, engaging, on demand medium is ideal for bringing listeners diverse voices and content through various journalistic styles.”

Kumanyika, a scholar whose research, writing and audio journalism focuses on popular culture and social justice, echoed that thought: “Over the past decade we’ve seen podcasting become what is now a $1.4 billion industry. But what’s more important is that podcasting and richly produced audio reporting amplifies and supercharges the deep and diverse journalism that our democracy needs. My own experience highlights how this medium can lift up diverse and critical voices and make engagement with the most important social issues irresistible."

In Horne’s distinguished career at the leading edge of audio reportage, she has seen continuous growth in the medium’s audience and cultural relevancy. Asked what students can expect from the new concentration, she said, “We’re looking to develop students into skilled audio wizards ready for the workforce, armed with a clear-eyed sense of the podcasting industry and rigorously trained as journalists. Our graduates will take the medium to new places, expanding the diversity of the voices and stories we hear, and re-imagining what is possible for podcasts.”

Ellen Horne is an associate professor and the director of the Audio Reportage and Podcasting concentration at the Arthur L. Carter Journalism Institute at NYU Arts & Science. Her research is focused on performance, documentation, the perception of authority in voice, and labor and production in audio and podcasting. In 2020, she was host, reporter, and producer for Luminary’s Lies We Tell. As executive producer of WNYC’s Radiolab from 2003-2015, she reported stories including ‘Deaf Comedy Jam,’ about the role of sign language interpretation in live comedy performance, and ‘Hope,’ about the trail of trauma behind fraud. She is the founder and editorial director at Story Mechanics, where she is currently in production on a slate of audio projects including a queer history project for Audible (where she served as executive producer of original content), an investigative journalism podcast series about evidence in criminal justice, a science-history theatrical stage show, and an audio installation project.

Chenjerai Kumanyika is an assistant professor at the Arthur L. Carter Journalism Institute at NYU Arts & Science. His research and teaching focus on popular culture and social justice. In addition to a body of scholarly and journalistic writing,  Dr. Kumanyika specializes in using narrative non-fiction audio journalism to critique the ideology of American historical myths about issues such as race, the Civil War, and policing. He was the co-executive producer and co-host of Uncivil, Gimlet Media’s Peabody Award-winning podcast about the Civil War. He has also collaborated on series for the Scene on Radio podcast, including Seeing White and The Land That Never Has Been Yet. Dr. Kumanyika is currently working on a podcast with Crooked Media about the history of the police in American popular culture.