KJCC: This Space Is Yours 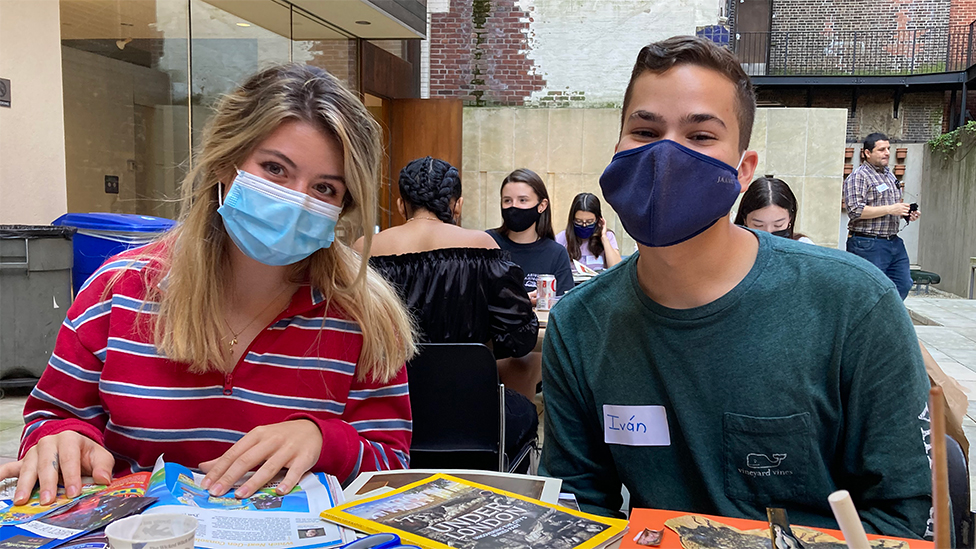 In a city where over 700 languages and dialects are spoken, NYU is dedicated to furthering the academic study of international cultures and providing opportunities for such engagement. One way NYU does this is through its international houses—centers dedicated to the academic study of cultures, languages, and public policy around the world. In addition to their role as a nexus for the research and study of languages and policies, these international houses act as centers of cultural engagement, presenting numerous events and activities that are open to the general public of New York City. These houses also serve as gathering places for students—particularly those in related fields of study—to engage with classmates and attend events. Whether a student is studying Physics or Creative Writing in Spanish, they are welcome to attend events that fit their interests and create a space for themselves at these international houses.

KJCC is dedicated to the study of Spain and the Spanish-speaking world. A vibrant and active community of faculty, visiting scholars and artists, students, and staff provide an array of cultural and academic programming. This year, KJCC has dedicated fundraising around its 25th anniversary to programs created by students, for students, with a campaign called This Space Is Yours.

A Home Outside the Classroom

The center also acts as a home outside the classroom for students from the Department of Spanish and Portuguese Languages and Literatures, the Creative Writing in Spanish program, and the Center for Latin American and Caribbean Studies, among others. Politics and Spanish major Iván Brea described his experience, saying, “last year, I developed a strong desire to immerse myself in the history, culture, art, literature, and politics of Latin America and Spain. I immediately became enamored with a space that was so dedicated to developing, cultivating, and promoting research, teaching, and general ideas on Spain and the Spanish-speaking world.”

True to its mission, KJCC acts as an academic and cultural center for the city of New York as well as NYU, welcoming world-renowned artists and professors and hosting events that are open to the general public. Some events have included the Creative Writing in Spanish Series, various poetry series, a podcast, and the El Taller community of the Interdoctoral University Consortium. Most recently, KJCC was visited by US Ambassador, Julissa Reynoso.

Student involvement has always been the beating heart of KJCC’s mission as it also hosts fun and engaging events where students with similar academic interests can mingle and foster new friendships. As Iván described, “the space has served as an amazing place to study, connect with friends, and experience unique programming at an academic institution.”

Even during the height of the pandemic, KJCC maintained its sense of community by becoming a virtual gathering space with online events and meetings. Devon V. Forester, a senior studying international relations and Spanish, first learned about KJCC during the pandemic, saying “I became interested in KJCC after transferring to NYU and being exposed to the content that the center was putting on Facebook Live during the pandemic. I really enjoyed watching the different talks that were held with specialists in a variety of fields, and it was a way for me to feel connected to my campus despite not being able to be there in person. Once arriving in person in the Fall of 2021, I was able to see KJCC as a meeting place for those interested in the Spanish-speaking world.”

The return to in-person events has invigorated the community further, attracting both those who used to attend in-person events and those who first joined virtually. Devon continued, “once I saw that there were weekly Fridays on the Patio, a designated time for undergraduate students to do relaxing, fun activities together, I was even more interested in becoming a frequent participant in the center.”

Programs by Students, for Students

From the popular Fridays on the Patio to other events, the 25th anniversary celebrations and This Space Is Yours campaign reiterate KJCC's dedication to the student body. Devon said, “constantly KJCC has asked for student input and it shows in the programming that, I feel, serves the needs of undergraduates. These lighthearted programs have given us the no-stress, no-judgment space to speak our thoughts in a way that the classroom just can’t." In order to incorporate students at the administrative level, the center also launched an internship program in 2020 and added an Undergraduate Student Representative to the center's Advisory Board.

When asked to describe the feel of the center, Devon said, “KJCC is a center that will treat you with open arms. The staff at the center truly value being available to each and every person regardless of any background with Spain or the Spanish-speaking world. There are so many interesting and highly-regarded speakers." Iván agreed, saying “KJCC has always served a respite for me, a space that I can utilize if I am having a long day or had a difficult week. A space that I could just be and relax in a beautiful environment. At the same time, I have connected with fellow students and professors that allowed me to connect with other NYU community members in a non-traditional academic environment and outside the classroom.”

For a list of upcoming events to attend and to get involved in the KJCC community, visit their website.