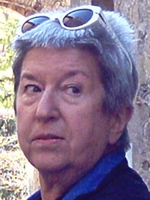 Sylvia Molloy is an Argentine writer and critic who has taught at Princeton, Yale and NYU, from where she retired in 2010. At NYU she held the Albert Schweitzer Chair in the Humanities. She is the author of two novels: En común olvido (2002). She has also written two short prose pieces, Varia imaginación (2003) and Desarticulaciones (2010). Her critical work includes La Diffusion de la littérature hispano-américaine en France au XXe siècle (1972), Las letras de Borges (1979), At Face Value: Autobiographical Writing in Spanish America (1991), Poses de fin de siglo. Desbordes del género en la modernidad (2013), and edited volumes such as Hispanisms and Homosexualities (1998) and Poéticas de la distancia. Adentro y afuera de la literatura argentina (2006). She has been a fellow of the Guggenheim Foundation, the National Endowment for the Humanities, the Social Science Research Council, and the Civitella Ranieri Foundation. She has served as President of the Modern Language Association of America and of the Instituto Internacional de Literatura Iberoamericana and holds an honorary degree in humane letters from Tulane University.

In 2007 she created the MFA in Creative Writing in Spanish, with the collaboration of Lila Zemborain and Mariela Dreyfus. The MFA is the first program of its kind in the United States. It is modeled along the lines of the NYU MFA in Creative Writing in English, taking advantage as well of a similar, bilingual Program, at University of Texas at El Paso. Classes and workshops are taught in Spanish and students are mostly Spanish, Latin American or Latino.