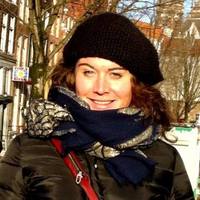 Sophie L. Gonick is Assistant Professor of Social and Cultural Analysis at NYU with an emphasis on Global Urban Humanities. A scholar of urban planning and history, poverty, and race and gender, Gonick was educated at Harvard and the University of California, Berkeley, where she earned both a Master’s in City Planning (2010) and a Ph.D. (2015). Before joining SCA, she was an Assistant Professor/Faculty Fellow at NYU’s Center for European and Mediterranean Studies.

Her work emerges at the intersection of planning history, critical race and gender studies, and debates on migration, integration, and inclusion, particularly within the context of Southern Europe. Most recently, she has considered housing mobilizations in contemporary Madrid against two interlocking histories: the Spanish experience with urbanization and Europeanization across the last century, and the more immediate story of South American migration in the wake of the crises of the 1990s. Revealing the links between rural indigenous protest and Europe’s urban social movements, she has sought to destabilize hegemonic epistemologies of urban scholarship and pedagogy beyond dichotomies of Global South and North Atlantic. Additional work has focused on the endurance and evolution of needs-based squatting, property regimes, and the institutionalization of protest and contestation. She is currently developing a new project on municipalism and urban protest across the North Atlantic in the age of right-wing populism.

Gonick has received support from the Mellon Foundation and the Social Science Research Council. Her work has been featured in leading planning and critical geography journals, including Antipode and IJURR: International Journal of Urban and Regional Research. She is currently completing a book manuscript tentatively titled At the Margins of Europe: Property, Personhood, and Protest in Madrid, 1939-2014. The dissertation upon which it is based was awarded the biennial Anthony Sutcliffe Memorial Prize for best dissertation from the International Planning History Society.

Dispossession and Dissent: Immigrants and the Struggle for Housing in Madrid. Forthcoming Spring 2021 from Stanford University Press

“From Occupation to Recuperation: Of Property, Politics, and Provincialization in Contemporary Madrid.” IJURR International Journal of Urban and Regional Research. 2016.