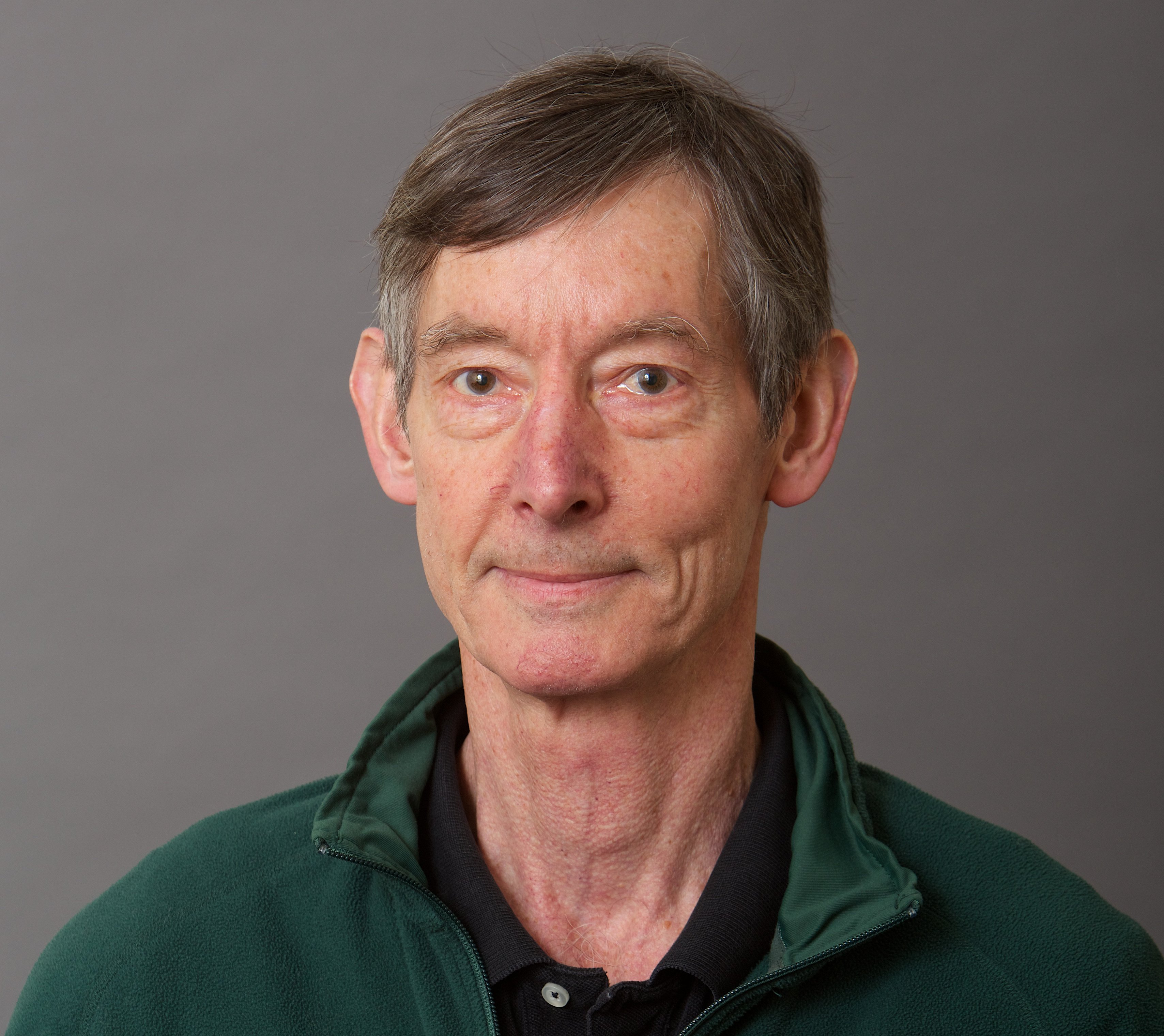 My main research interest is defining the role of cortical neurons in visual processing. This work includes physiological and anatomical studies in the primate visual pathways, mainly the primary visual cortex. In conjunction with these physiological studies, I collaborate in studies that relate pursuit eye movements to perceptual performance.

Cortical Processing and Circuits: Much of my visual physiology work has centered on unraveling the cortical receptive field properties in adult monkey cortex. This is important for a number of reasons: visual cortex is one of the best understood cortical regions and appears to play a pivotal role in many of the features of visual analysis underlying visual perception. It is also strongly affected by deprivation and learning so having a solid understanding of the normal properties is essential to understanding dysfunction. My colleague, Andrew Parker, and I showed that the activity of individual neurons could match perceptual performance (Parker & Hawken, 1985; Barlow et al, 1987; Hawken & Parker, 1990) on a number of low-level visual tasks. With Andrew Parker while at Oxford and with my colleague Bob Shapley since I moved to NYU I have also studied how receptive fields are organized spatially (Hawken & Parker, 1987; Parker & Hawken, 1988; Hawken & Parker, 1991), and how different streams from the retina, the M and P-pathways, selectively influence the properties of different streams of cortical neurons (Hawken & Parker, 1984; Hawken et al, 1988),

Structure-Function Relationships in Primary Visual Cortex: On the one hand we often have detailed knowledge of neuronal firing to an array of visual stimuli, obtained from extracellular recording, that characterize the receptive field. 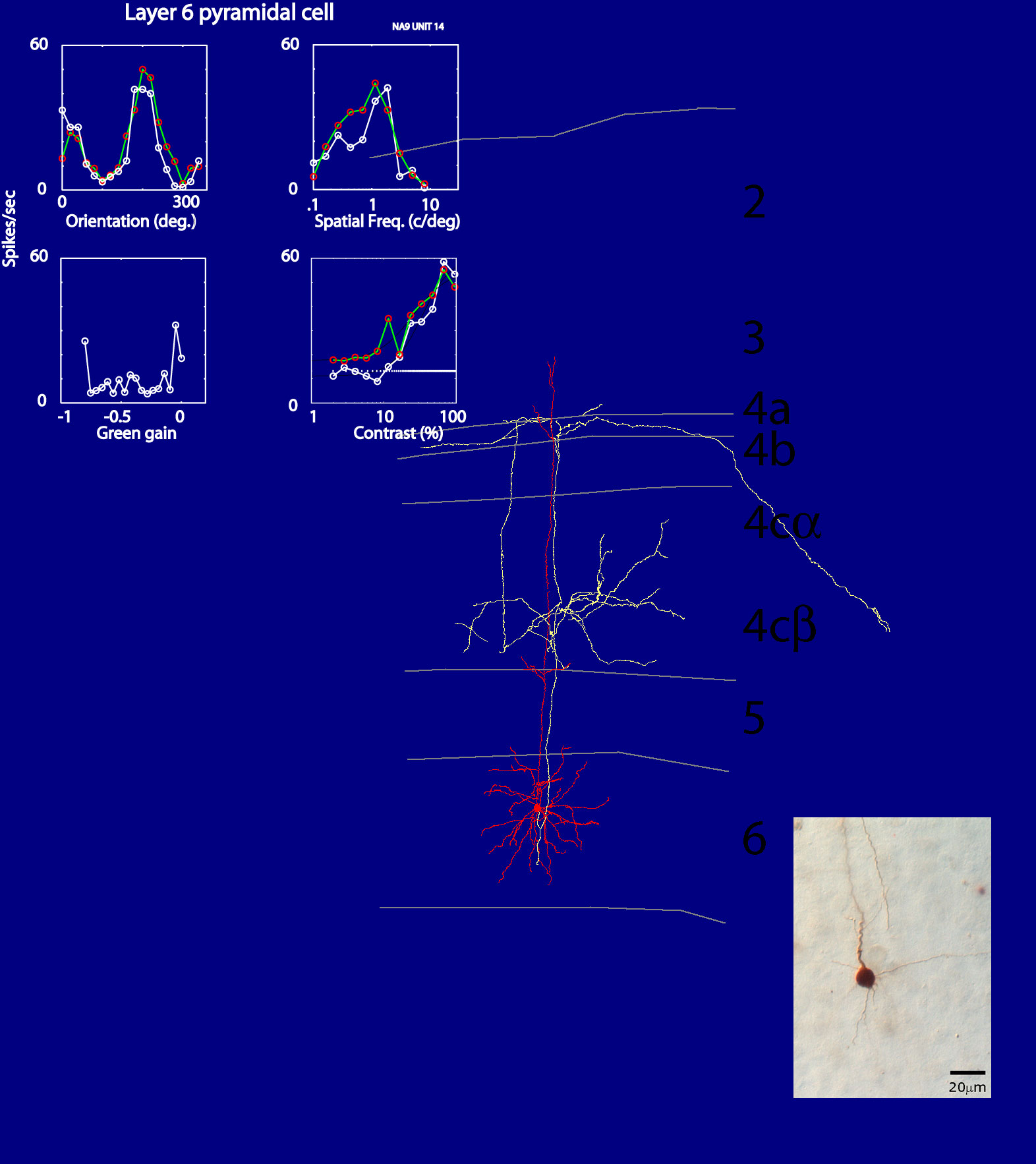 On the other hand, from anatomical studies, we know about the intricate neuronal architecture and the patterns of synaptic connections both within V1 and between V1 and extra-striate cortex. In order to better understand such a complicated neuronal network, modeling how cortical neurons interact within the network is a crucial area of research. At present, there is one link that is missing that if found would enable much more realistic modeling of the cortex: the link between structure and function. In collaboration with Siddhartha Joshi I have recently developed a method called juxtacellular loose-patch (JC-LP) recording (Joshi & Hawken, 2006) to label neurons in primary visual cortex after functionally characterizing their receptive field properties. One of out goals is to identify subclasses of excitatory and inhibitory neurons and associate them with receptive field properties, thereby greatly extending our current knowledge of how the cortical circuits operate.

Modulation and Inhibition in Cortical Circuits: Primarily driven by recent work with a predoc and then postdoc in my lab, Anita Disney, I have begun to study how neurons in primary visual cortex are influenced by neuromodulators. It has been known for sometime that that there is an extensive innervation of cortex by cholinergic afferents, and the effects of ACh application to cortical neurons have shown mixed effects. Anita showed in her thesis work that one class of receptors for acetylcholine (ACh), the nicotinic receptors, are located on primary afferents arriving from the geniculate into layer 4c of monkey primary visual cortex. She hypothesized that nicotine should enhance geniculate transmission, and we devised a series of experiments to investigate this in vivo. We found that the response of neurons in layer 4c was enhanced by the iontophoretic application of nicotine, but neurons outside 4c were either unaffected or suppressed. Tantalizingly, the effects we observed are almost identical to those that are observed during an enhancement of response during attention in the awake-monkey, which prompted us to suggest that some of the effects of attention might be mediated by ACh via nicotinic receptors (Disney et al, 2007).

Most of the receptors for ACh on inhibitory interneurons in primate cortex are muscurinic. We found that outside layer 4c most effects of ACh are suppressive. We also found that blockers of the inhibitory receptor, GABA, block the suppressive effects of ACh in cortex. We have proposed a model that includes both facilitation via ACh on presynpatic nAChR's on LGN afferent terminals in cortex and broadly tuned ACh induced suppression via mAChR's on inhibitory interneurons in cortex (Disney et al, 2012). This model produces selective response enhancement without loss of tuning.

In addition, we have recently determined the distribution of neurons in primate V1 with the Kv3.1 and Kv3.2 ion channels that confer the fast-spiking phenotype on neurons, finding that in addition to the expected localization on sub-populations of inhibitory interneurons there is also expression on excitatory neurons (Constantinople et al, 2009). These results suggest that, unlike rodent cortex, primate cortex is likely to have a population of fast-spiking excitatory neurons.

Color and Motion Psychophysics and Eye Movements: In the 1980 s it was speculated that there were selective mechanisms for the perception of color and motion, and that these had their own separate pathways in the brain. In a series of psychophysical studies with Karl Gegenfurtner, started when he was a postdoc here at NYU and continued since he moved back to Germany, we found that stimuli that selectively isolate the chromatic pathway can provide signals to drive the perception of motion (Hawken et al, 1994; Gegenfurtner & Hawken, 1995; 1996; Hawken & Gegenfurtner, 1999).

Perception and action are intimately related. One intriguing question that has received a lot of attention recently is whether the same neural signals that are used to perceive visual objects are also used to initiate and maintain actions. In a study that formed his Ph.D. thesis I worked with Dario Ringach on recording vergence eye movements in response to a stimulus where the three-dimensional perception of depth comes from motion cues, but is not due to disparity (Ringach et al, 1996). In this study we found that the percept of motion in depth was strongly related to the vergence eye movements, suggesting that the same processing is used for perception as for driving motor action.

Another eye movement system that is particularly amenable to measurement is the pursuit system, it is voluntary and can be studied in the open loop phase. In a series of studies we sought to determine whether the motion signals that drive perception are the same as those that drive pursuit (Hawken & Gegenfurtner, 2001; Gegenfurtner et al, 2003; Spering et al, 2005; Braun et al, 2008) and, surprisingly, found that although they are strongly correlated they are not the same. These results suggest that, under some conditions, signals driving perception and action are distinct.