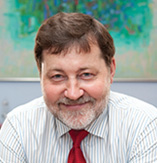 Research in my laboratory is concerned with central auditory processing. Our physiological studies of single neurons at the auditory brainstem, midbrain and cortex, permit us to investigate the representation of acoustic signals throughout the central auditory pathway. My training in central auditory neurophysiology began at Monash University, Australia, where I completed my Ph.D. After postdoctoral training at the University of Oxford, England, I held several appointments at the University of California, Irvine, before joining New York University in 1995. Much of my effort has been directed towards the neural mechanisms of directional hearing. Particular emphasis has been on how the auditory system responds to time-varying binaural cues, (as are commonly generated through head movements or through motion of sound sources). We have studied the neural processing of sounds ranging from simple stationary binaural tones to simulations of motion. For successful encoding of interaural time differences, binaural neurons at the first stage of binaural processing (the auditory brainstem) must be able to discriminate very small differences in time of arrival of synaptic inputs originating from the two ears. It follows that these neurons should be specialized to preserve temporal information present in the discharge of presynaptic elements and hence should not be sensitive to motion cues. Although our studies have confirmed that primary binaural neurons are relatively insensitive to motion, we have found that certain neurons in the auditory midbrain and cortex are much more sensitive to simulated motion than to static binaural stimuli. Thus, it appears that motion sensitivity in the higher auditory pathway results from a transformation of the initial neural representation. Moreover, we have found that midbrain and cortical responses to time-varying components of a stimulus can have a remarkably long-lasting conditioning effect on the response to an immediately succeeding static component. In order to investigate the behavioral significance of these conditioning effects, we are currently studying cortical processing in behaving primates trained to discriminate dynamic spatial cues. Recently we have demonstrated that neural sensitivity to auditory motion is but one instance of the brain's emphasis on the relevance of dynamic features of acoustic stimuli. The auditory system has the fascinating capacity to encode complex signals with fine temporal precision and then to represent these events over much longer time-scales as unified acoustic objects, in which the location of the sound source is just one of the unifying attributes. With this in mind, we are investigating the neural processing of a broad range of dynamic acoustic signals, including amplitude and frequency modulations.