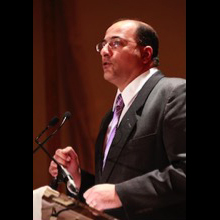 Ambassador Ido Aharoni serves as a global distinguished professor at New York University’s Program of International Relations in the Faculty of Arts and Sciences. Ambassador Aharoni is a 25-year veteran of Israel’s Foreign service, a public diplomacy specialist, founder of the Brand Israel program, and a well-known nation branding practitioner. Ambassador Aharoni, who served as Israel's longest-serving consul-general in New York and the tri-state area for six years, oversaw the operations of Israel’s largest diplomatic mission worldwide.

Ambassador Aharoni has been a member of Israel’s Foreign Service since the summer of 1991 and held two other overseas positions in Los Angeles and in New York.

In 2002, Aharoni initiated the inclusion of Israel in the BAV (Brand Asset Valuator), the world's largest database on brands maintained by advertising giant Y&R (Young and Rubicam). Later that year, he convened the Brand Israel Group, an independent group of marketing and branding specialists, thus creating the foundation for what would later become the Brand Israel Program.

In September 2007, Aharoni was appointed to serve as the nation's first head of brand management in Jerusalem. The program is designed to improve Israel's positioning in the world by highlighting its relative advantages and increasing its relevance. The logic, according to Aharoni, is that "in today's competitive world it is no less important for nations to be attractive than right". "Every place has a DNA, a personality, just like a human being," Aharoni said. "No place, no person, no organization, wishes to be solely defined by its problems".

In the spring of 2006, Aharoni was appointed to serve as a senior advisor and press secretary to Israel's Foreign Minister and Vice Prime Minister Ms. Zippy Livni. In that capacity, he introduced nation-branding methods and country positioning strategies as pillars of Israel’s public diplomacy.

Between the years 1994-1998, Aharoni served as Israel’s consul for communications and public affairs in Los Angeles and the southwestern United States. In that position, he covered the seven southwestern states of the USA and worked extensively in some of America’s top markets (Greater Los Angeles, San Diego, Las Vegas, Phoenix, Tucson, Salt Lake City, and Denver).

Between the years 2001-2005, Aharoni served as Israel’s consul for media and public affairs at Israel's Consulate General in New York and the Tri-State area. He assumed this position several weeks prior to the terror attacks of 9/11. As the head of the department, Aharoni oversaw the operation of Israel's largest public diplomacy and media relations apparatus worldwide. He handled public diplomacy, media relations, community outreach, social media platforms, as well as a variety of informational services.

Prior to his arrival in New York, Aharoni served as a policy advisor to the director-general of the Ministry of Foreign Affairs in Jerusalem. Over the years Aharoni served five different directors-general.

Before joining the Ministry of Foreign Affairs Aharoni earned a Bachelor of Arts Degree from Tel Aviv University with a joint-major in Film and Television, Sociology, and Anthropology. He then moved to the United States where he obtained a Master’s Degree in Mass Communications from Emerson College in Boston. In 1993 Aharoni attended the Hebrew University’s special program for foreign service cadets in Government and Diplomacy.

While studying at Emerson College Aharoni directed and produced the documentary-short Doorman which chronicled the story of the late Phil Adelman, a former retail executive who became a doorman at the Marriott Hotel in Cambridge, MA after losing his job at the age of 56. Phil Adelman's story, as told in Doorman, would later be featured in the book ‘The Real Heroes of Business-- and not a CEO Among Them’ written by Bill Fromm and Leonard A. Schlesinger, the Oprah Winfrey Show, The Boston Globe, and other publications.

Upon completion of his degree, Aharoni joined Israel's state-run Educational Television for its daily newscast Erev Hadash (A New Evening) where along with his colleague Shmuel Korazim co-conceived one of Israel’s leading sports news magazine "SporTV", which ran for 13 years on national television (1994-2007).

In the spring of 1993, upon completion of the Foreign Ministry's cadet program, Aharoni was appointed to serve under then Foreign Minister Mr. Shimon Peres, as Policy Assistant to Israel’s Chief negotiator with the Palestinians. In that capacity, Aharoni took place in the back-channel negotiations between Israelis and Palestinians in Europe and in the middle-east that led to the signing of the Declaration of Principles and the mutual recognition agreement (also known as the ‘Oslo Accords’). Aharoni was a member of Israel’s official delegation to the signing ceremony at the White House in September of 1993.

In 2013, the news magazine 'Algemeiner' named him among ‘Top 100 People Positively Influencing Jewish Life’ commonly known as the "Jewish 100."

In 2015 he was awarded the ‘Honorary Governor’ status by Tel Aviv University. In 2005 a communications studies scholarship, ‘Wings of Hope’, was named after him by the Yemenite-Jewish Federation of North America. In 1998 he was given the Community Leadership Award by the American Friends of the Rabin Medical Center.

Aharoni has regularly appeared on national television and radio and has frequently published articles in the national and international media.

In 2013 Aharoni was invited by Google to take part in their renowned speakers’ series ‘Authors at Google’.

Ambassador Aharoni is also the Founder of two annual public diplomacy conferences: BTC (Broadening the Conversation 2011-2014) and the Beyond Conference (2015 to present).

In 2003, as part of his public diplomacy efforts, Aharoni initiated the induction of Israeli-manufactured all-weather, multi-role combat aircraft Kfir (Lion Cub) on board of The Intrepid Sea, Air and Space Museum.

Aharoni served in the Israel Defense Forces as a company commander in the infantry during the first Lebanon War. He retired from military reserves, at the age of 48, as a Major.

He is married to Julie Goodman-Aharoni, a native of Los Angeles. They have three children: Talia, Sharon, and Adam.