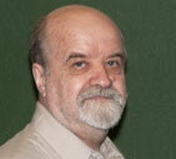 Fedor Bogomolov received his Ph.D. from the Steklov Institute of the Russian Academy of Sciences in 1974, where he continued to work as a researcher until coming to NYU in 1994.

Fedor has contributed fundamental insights to a wide range of fields, from his early papers in topology, differential and algebraic geometry, to number theory, group theory, invariant theory and many others. His decomposition theorem is the basis of classification of varieties and forms the foundation of modern string theory and mirror symmetry, some of the most important concepts in modern mathematical physics. It is also the basis of the theory of holomorphic symplectic varieties, which have been intensely studied in recent years, as they encode highly nontrivial algebraic integrable systems. Bogomolov stability, Bogomolov-Miyaoka-Yau inequality, Beauville-Bogomolov form, Bogomolov conjecture about Galois orbits of points on abelian varieties - these are just a few of his deep ideas, which continue to inspire researchers worldwide. Bogomolov’s most recent work, on almost abelian anabelian geometry, unraveled hidden structures in function fields of algebraic varieties, allowing the reconstruction of these fields from their Galois symmetries. This is a tremendously significant development, creating a whole new philosophy in higher-dimensional birational geometry.

Fedor has published more than 110 papers, given plenary talks at major international meetings, and served on editorial boards of leading mathematical journals.  Bogomolov is one of the giants of modern algebraic geometry.