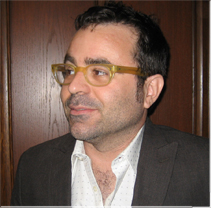 Dylon Robbins has published and carried out research on Brazilian and Cuban cinema and music, the documentary and materiality, Walt Disney and Sergei Eisenstein, polyrhythm and temporality, spirit possession and political subjectivity, torture, pornography, cannibalism, and anthropophagy, as well as on visual culture and war in the United States in 1898, with articles appearing in Brasiliana, Discourse, Journal of Latin American Cultural Studies, Luso-Brazilian Review, and the Revista Iberoamericana, among other venues.

He has coedited a special issue of Discourse on media and materiality in Latin America with Javier García Liendo, as well as the volume Guillén Landrián, o el desconcierto fílmico, with Julio Ramos (Almenara 2018).  His translations of essays by the Brazilian philosopher Marilena Chaui appear in the English-language anthology of her work Between Conformity and Resistance: Essays on Politics, Culture, and the State edited by Maite Conde (Palgrave Macmillan 2011).

His monograph, Audible Geographies in Latin America:  Sounds of Race and Place (Palgrave Macmillan 2019), has been reviewed in the Journal of Latin American Cultural Studies and the Revista de Estudios Hispánicos. The book engages with a diverse body of archival materials in order to examine the audibility of place as a racialized phenomenon through the analysis of listening practices and media technologies in different periods and locales, including Salvador da Bahia in the 1890s, Havana in the 1910s or 1960s, or Rio de Janeiro and São Paulo in the 1930s.

Current research involves the telegraph, territory, empire, and diasporic imagination in the Caribbean and Brazil, as well as spirit writing and phonography in early twentieth-century Brazil.

He teaches courses on Latin American cultural and intellectual history, race and culture in Brazil, cannibalism and anthropophagy in the Americas, and popular music in the Afro-Americas.  He has held visiting professorships at the Université François Rabelais in Tours, France, and in the Department of Romance Languages and Literatures at Harvard University.

Fulbright-Hays fellow at the Cinemateca Brasileira and the Instituto de Estudos Brasileiros, and in Cuba at the ICAIC, the Biblioteca Nacional, and Casa de las Américas. Faculty Fellow, Humanities Initiative, NYU. Guest Research Fellow, Villa La Pietra, NYU Florence, Italy.  Visiting Professor at the Université François Rabelais in Tours, France and at the Department of Romance Languages and Literatures at Harvard University.