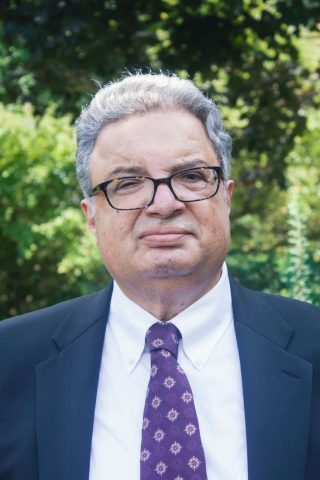 Ali Mirsepassi is Albert Gallatin Research Excellence Professor of Middle Eastern and Islamic studies at Gallatin and in the Department of Middle Eastern and Islamic Studies in the Faculty of Arts and Science. He is also director of Iranian Studies Initiative at NYU. In addition, he is affiliated faculty at the NYU Sociology department in the Faculty of Arts of Science. He was a 2007-2009 Carnegie Scholar. He is the co-editor, with Arshin Adib-Moghadam, of The Global Middle East, a book series published by the Cambridge University Press. His teaching and research interests include social theories of modernity, Iranian intellectual history, political Islam, modern Islamic thought, and sociology of religion. He is the author of Iran’s Troubled Modernity: Debating Ahmad Fardid’s Legacy (Cambridge University Press, 2018), Transnationalism in Iranian Political Thought: The Life and Thought of Ahmad Fardid (Cambridge University Press, 2017), co-author, with Tadd Fernee, of Islam, Democracy, and Cosmopolitanism (Cambridge University Press, 2014); is the author of Political Islam, Iran and Enlightenment (Cambridge University Press, 2011), Democracy in Modern Iran (New York University Press, 2010), Intellectual Discourses and Politics of Modernization: Negotiating Modernity in Iran (Cambridge University Press, 2000), and Truth or Democracy (published in Iran); the co-editor of Localizing Knowledge in a Globalizing World (Syracuse University Press, 2002); and the guest editor of “Beyond the Boundaries of the Old Geographies: Natives, Citizens, Exiles, and Cosmopolitans” in Comparative Studies of South Asia, Africa and the Middle East, which was published in 2005. He is currently completing the book Al Ghazali’s Alchemy of Happiness. His new book, Iran’s Quiet Revolution: The Downfall of the Pahlavi State, will be published in November 2019, Cambridge University Press. From 2002 to 2015, he held several administrative posts in the Gallatin School Deans’ Office, most notably serving twice as the School’s interim dean. Professor Mirsepassi has taught at Hampshire College, Amherst College, Mount Holyoke College, Smith College, and the University of Massachusetts at Amherst. He is the recipient of several awards, including a 2001 Best Researcher of the Year Award, a teaching award from Tehran University, 2014 Award for Outstanding Service from the Institute for International Education Scholar Rescue Fund, and has received grants from the Ford Foundation and the National Endowment for the Humanities.

Professor Ali Mirsepassi's Transnationalism in Iranian Political Thought: The Life and Thought of Ahmad Fardid has just been released by Cambridge University Press. In the work, Mirsepassi follows the intellectual journey of the Iranian philosopher Ahmad Fardid to offers an account of the rise of political Islam in modern Iran.

Professor Mirsepassi has joined the Board of Trustees of Hampshire College.

Professor Mirsepassi’s 2015 filmThe Fabulous Life and Thought of Ahmad Fardid, which he co-created with Hamed Yousefi, was screened at NYU (October 2015), Yale (November 2015), and Princeton (April 2016).

Professor Mirsepassi had his article “Debating Marshall Berman in Iran: “All That Was, Is Smoked into the Air,” published in Urban Research 5, in April 2016. The article he co-authored with Tadd Fernee, “Defending the Current Academic Orthodoxy in Islamic Studies: A Response to Bruce Lawrence,” published in Sociology of Islam, Volume 3, in December 2015. His “Heidegger, Enlightenment, and Metaphysics: A Sociological Critique of ‘Being’ out of ‘Time’” was published in Tehran University’s Journal of Social Sciences, in the fall of 2015.

Professor Mirsepassi was invited to deliver “Islam and Democracy (or Cosmopolitanism), Confronting Religious Violence, “at Union Theological Seminary, in New York, New York, in October 2015. He was invited to deliver “Imagining A Modern Iran and Human Sciences,” for NYU CAS’s Scholars Lectures Series, in February 2016. Mirsepassi was a discussant for “Arisen from the Grave: Iranian Commercial Cinema Distribution via New Media Technology,” at the Iran Graduate Student Workshop, at Princeton University, in April 2016.