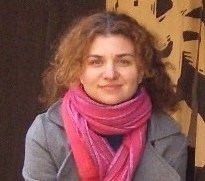 Before starting her doctoral studies in Buddhism at Columbia University, Dessi Vendova spent eleven years studying and living in China and Japan. Her specialty at Peking University was Classical Chinese literature with a focus on the early medieval period (220-589) and the pre-Tang and Tang dynasty literature, religion and culture. In both her B.A. and M.A. graduation theses (written in Chinese) she examined the connection between classical Chinese short stories (chuanqi), Buddhist ethics, and Buddhist “former birth stories” (jātaka) in particular. Her doctoral dissertation project draws inspiration from some of the themes she began exploring during my studies in China, but has incorporated art historical and religious studies methods, and is more focused on the exploration of the stories about the Buddha’s life and the religious practice and art it inspired.

Dessi Vendova’s research project is an interdisciplinary study linking Buddhist studies, Buddhist narrative texts, art history, and archaeology and re-examines the life of the Buddha in Indian, Central Asian and Chinese Buddhist narratives and art. Her dissertation, “The Great Life of the Body of Buddha: Re-examination and Re-assessment of the Images and Narratives of the Life of Buddha Shakyamuni,” bridges disciplinary boundaries by bringing together evidence from the fields of Buddhist studies, literature, art and archaeology. This transregional study examines hitherto unexplored connections between the stories of the Buddha’s lives, the Buddha’s body textual and visual depictions, and puts forward a hypothesis of how that connects to the iconographical programme for the construction of early Buddhist sites such as stupas and rock-cut caves from India, through Central Asia to China, with primary attention devoted to the period between the third century BCE and the sixth century CE.

Apart from her main research on the life of the Buddha and Buddhist narratives, Dessi Vendova's research interests also include comparative study of pre-modern Indian and Classical Chinese narrative literature; travelogues of Chinese Buddhist pilgrims to India and other Buddhist lands; comparative study of Indian, Central Asian and Chinese Buddhist beliefs and practices, especially their connections with Buddhist art and material culture – such as the art of the Buddhist stupas and Indian, Central Asian and Chinese rock-cut cave temples. In addition, she is also very interested in exploring issues related to Buddhist ethics; women; the body as location for religious experience in Buddhism and in premodern Indian and Chinese religions, cultures and art more generally.