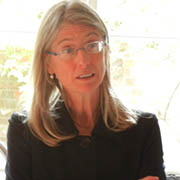 Renaissance literature and culture; history of the book; literary theory; theories of writing.

Juliet Fleming is the author of Graffiti and the Writing Arts of Early Modern England (Reaktion, 2001), and Cultural Graphology: Writing After Derrida (Chicago, 2016). With Bill Sherman and Adam Smyth she is editor of The Renaissance Collage, a special issue of The Journal of Medieval and Renaissance Studies (45:3, September 2015) that describe that processes of cutting, dismantling, and reassembling printed books in the early modern period. Read the issue here. Fleming is the Director of the MA Program in English and American Literature, and was the recipient of a Golden Dozen Teaching award in 2014. Her teaching interests are in Renaissance literature and literary theory. She believes that there is no way to study Derrida’s writing—or, for that matter, Renaissance literature—other than by reading it closely, and she welcomes students to her classes who have no prior knowledge of either. She was the recipient of an NYU Humanities Center Team-teaching stipend to support development of a graduate seminar, 'The Culture of the Renaissance: A Re-Translation,' which she co-taught Spring 2017 with Professor Christopher Wood, Department on German.