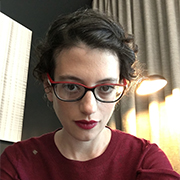 Julia Jarcho's research and teaching focus on theater studies, modernist literature, critical and literary theory, and playwriting. Her first critical book, Writing and the Modern Stage: Theater Beyond Drama (Cambridge University Press, 2017) argues that theater has offered a series of modernist and contemporary writers an imaginative site for negating the present, and thus cultivating a utopian sensibility; it seeks to challenge the prevailing common sense that identifies theatrical experimentation as a move "beyond" the literary. Julia is also a playwright and director, with the company Minor Theater (minortheater.org); her book Minor Theater: Three Plays is available from 53rd State Press. Her play Grimly Handsome (Incubator Arts Project 2013, JACK 2015) won a 2013 Obie Award for Best New American Play. Other productions include The Terrifying (Abrons Arts Center 2017), Every Angel is Brutal (Clubbed Thumb 2016), Nomads (Incubator 2014), Dreamless Land (New York City Players/Abrons 2011), American Treasure (13P 2009), The Highwayman (NTUSA performance space 2004), and Delmar, which the visual artist Meredith James made into a movie installation (Jack Hanley Gallery 2014). She has received a Doris Duke Impact Award (2014), a Sarah Verdone Writing Award (2016), and grants from the Foundation for Contemporary Arts, the Lower Manhattan Cultural Council, and the Venturous Fund. She is an LCT New Writer in Residence at Lincoln Center and has been a MacDowell fellow, an Advisory Board member at Young Playwrights Inc., and a resident playwright at the Playwrights Foundation and the Eugene O'Neill Playwrights Conference. She has a in Rhetoric from UC Berkeley and an AB from Harvard. Her essays have appeared in Modern Drama and in Americana: The Journal of American Popular and another is forthcoming in Critical Inquiry.