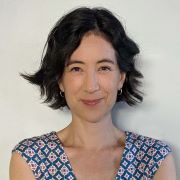 Jini Kim Watson received two undergraduate degrees, in architecture and literature, in Australia, before doing her doctoral study at Duke’s Literature Program. Her teaching and research investigate the ways that postcolonial cultural production, including literature, film, and theoretical writings, have reckoned with ongoing questions of decolonization, national and global imaginaries, uneven development and political modernity. Her first book The New Asian City (Minnesota UP, 2011) examined the rise of so-called “Asian Tiger” metropolises through the lenses of colonial history, national imaginaries and Cold War hegemonies. With a focus on East and Southeast Asia, her second monograph Cold War Reckonings (Fordham UP, 2021) explores the way the Cold War shaped both political power and cultural forms of decolonization, tracing a particular genealogy of authoritarianism in the so-called “free world." She has also co-edited, with Gary Wilder, a collected volume of essays, The Postcolonial Contemporary (Fordham UP, 2018), which thinks broadly and self-reflexively about the project of postcolonial studies in our current moment.

In other work, Jini has written on the films of Tan Pin Pin and Singapore as a model city for the global south; on Hwang Sok-yong and the legacy of the divided Korean peninsula; and on Oceanic literature and sovereignty with regard to Australia’s offshore refugee detention centers.

Jini regularly teaches undergraduate classes on postcolonial literature and theory, globalization, theories and practices of liberation, and Asia-Pacific literature and film. Recent graduate seminars have included "Global Marxisms," “Cold War/Postcolonial,” “The Postcolonial Contemporary,” and “Literary Dictatorships.” Since arriving at NYU she has been co-convener of the Postcolonial, Race and Diaspora Studies Colloquium, which regularly gathers noted and emerging scholars in the field for discussion and conviviality.