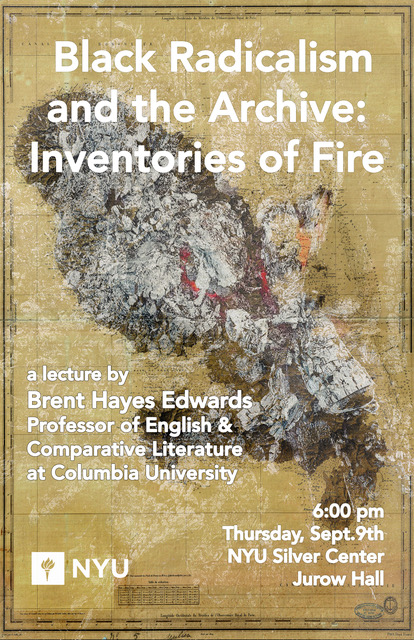 Brent Edwards - Black Radicalism and the Archive: Inventories of Fire

Professor Edwards’ innovative scholarship links together African diasporic histories and literary traditions, drawing on African American, French, and Anglophone and Francophone Caribbean and African sources. His lecture is drawn from a larger project on archives and archival practices that emerged out of a seminar he teaches in the Rare Book and Manuscript Library at Columbia.

Brent Hayes Edwards is the Peng Family Professor of English and Comparative Literature at Columbia University. Professor Edwards is the author of Epistrophies: Jazz and the Literary Imagination (Harvard University Press, 2017), which won the 2018 ASCAP Foundation Virgil Thomson Award for Outstanding Music Criticism as well as the 2019 Truman Capote Award for Literary Criticism; and The Practice of Diaspora: Literature, Translation, and the Rise of Black Internationalism (Harvard University Press, 2003), which was awarded the John Hope Franklin Prize of the American Studies Association, the Gilbert Chinard Prize of the Society for French Historical Studies, and runner-up for the James Russell Lowell Prize of the Modern Language Association. With Robert G. O’Meally and Farah Jasmine Griffin, he co-edited the collection Uptown Conversation: The New Jazz Studies (Columbia University Press, 2004). His research and teaching focus on topics including African American literature, Francophone literature, theories of the African diaspora, translation studies, archive theory, black radical historiography, cultural politics in Paris in the 1920s and 1930s, surrealism, experimental poetics, and jazz. Edwards has edited scholarly editions of Frederick Douglass’s My Bondage and My Freedom, Joseph Conrad’s Nostromo, W. E. B. Du Bois’s The Souls of Black Folk, and (in collaboration with Jean-Christophe Cloutier) Claude McKay’s Amiable with Big Teeth, and he served as the Harlem Renaissance period editor for the revised Third Edition of the Norton Anthology of African American Literature published in 2014. From 2001-2011, Edwards was co-editor of the journal Social Text, and he is also a member of the editorial boards of Transition and Callaloo. His translations include essays, poems, and fiction by authors including Edouard Glissant, Aimé Césaire, Jacques Derrida, Jean Baudrillard, Sony Labou Tansi, and Monchoachi, as well as Michel Leiris’s 1934 book Phantom Africa (Seagull Books, 2017), for which Edwards was awarded a 2012 PEN/Heim Translation Fund Grant. Edwards was a 2015 Guggenheim Fellow, and in 2020 he was elected to the American Academy of Arts and Sciences.

Following the lecture, attendees will have a chance to gather in the Silverstein Lounge.