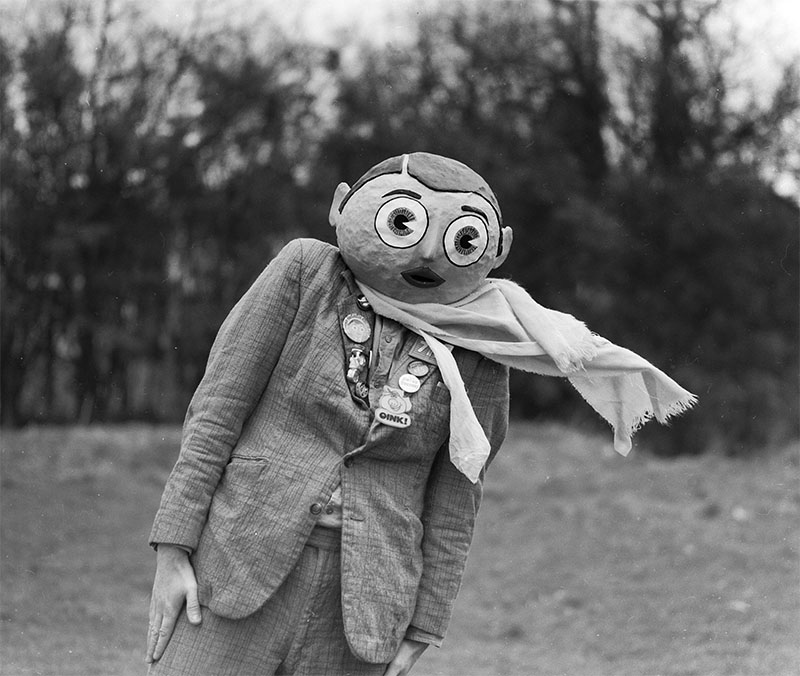 "He has talent, but his fantasy is not always a success." (School report.)

Frank Sidebottom came from the small Northern England village Timperley. He was 35, lived with his mother, and had an outsized papier-mache head. He sang songs such as I Said, 'Hey You, Riot Policeman', Christmas Is Really Great, and I Am The Champion (off his LP Frank Sidebottom Salutes The Magic of Freddie Mercury and Queen and also Kylie Minogue (You Know ... Her Off Neighbours). Many of these featured the word 'bobbins'; all of them ended with the phrase, "You know it is/ It really is". He was often seen with a miniature version of himself called Little Frank.  At the height of his fame he played Wembley Stadium. At his last gig, above a pub in 2010, he performed a singalong version of Joy Division's Love Will Tear Us Apart.

Being Frank is a wonderful, tender, funny portrait of Frank Sidebottom - and of his creator Chris Sievey, whose previous band The Freshies are fitfully remembered for their post-punk-era songs I'm In Love With The Girl On The Manchester Virgin Megastore Checkout Desk, I Can't Get Bouncing Babies By The Teardrop Explodes and If You Really Love Me, Buy Me A Shirt. It features luminaries of the Manchester music scene - John Cooper Clarke, The Durutti Column's Bruce Mitchell, C.P. Lee from Alberto Y Lost Trios Paranoias, Rabid Records' Tosh Ryan - recalling this singular figure who has been described as "one of the funniest and most enduring oddballs of all time".

JON RONSON is the author of the international and/ or New York Times bestsellers So You've Been Publicly Shamed, The Psychopath Test, Them: Adventures with Extremists, Lost At Sea, and The Men Who Stare At Goats. He is a regular contributor to This American Life, New York Times magazine, GQ and The Guardian. His original screenplays include Okja (co-written with Bong-Joon Ho) and Frank (co-written with Peter Straughan). As a student in the 1980s, he dropped out of college to play keyboards in Frank Sidebottom's Oh Blimey Big Band.