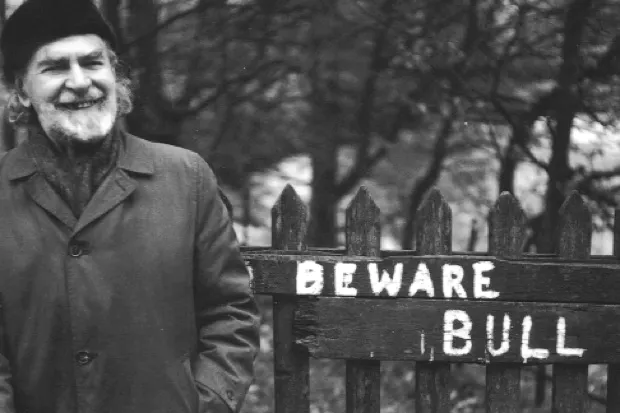 BRIGGFLATTS is a love poem.

BRIGGFLATTS is a poem marinated in memory and mythology and place.

Cyril Connolly called it the finest long poem to have been published in England since T.S. Eliot's Four Quartets". Thom Gunn declared it "one of the few great poems of this century. It seems to me greater each time I read it." For Alex Niven, it is "an epic work of northern English nonconformism quite anything like written before or since."

"If Basil Bunting were not remembered for Briggflatts, he might still be remembered as the protagonist of a preposterously eventful 20th-century life. By the age of 50, he had been a music critic, a sailor, a balloon operator, a wing commander, a military interpreter, a foreign correspondent, and a spy. He had lived on three continents (and one boat), survived multiple assassination attempts, and been incarcerated throughout Europe. He had also apprenticed at Ezra Pound's poetic 'Ezuversity' in Rapallo, played an "indifferent game of chess with General Franco in the Canary island, and communicated with Bakhtiari tribesmen in classical Persian.

"Educated in Quaker schools, he was imprisoned for refusing to serve in the First World War - and released after a brief hunger strike - only to high-mindedly rush into the Second, during which he served in the Royal Air Force and MI6. As a London Times correspondent in Tehran, in 1952, he watched as a hired mob congregated outside his hotel and chanted, 'DEATH TO MR BUNTING!' (Christopher Spaide, The New Yorker)

'Poetry," believed Basil Bunting, "like music, is to be heard."

This evening Briggflatts shall be heard.

MC HYLAND is the founding editor of DoubleCross Press, and produces scholarly and poetic texts, artists' books, and public art projects. Her second full-length book of poems, THE END, is forthcoming this June from Sidebrow.

DAVID MASON composes music under the name of Listening Center, and has released music on Ghost Box, Polytechnic Youth, and A Year In the Country. He works with analogue synthesis and magnetic media and has collaborated with Paolo Javier on several projects.

ALEX NIVEN is a writer from Northumberland. He is Lecturer in English Literature at Newcastle University and Editor-at-Large at Repeater Books. His edition of Basil Bunting's letters is forthcoming from OUP.

TOM PICKARD has been, variously, a poet, playwright, oral historian, bookseller, radio documentarian, and librettist. In 1965 he organised the first public reading of Bunting's Briggflatts at Morden Tower in Newcastle.

DON SHARE is the editor of Poetry. He is the author, editor, or translator of over a dozen books, including The Poems of Basil Bunting, Bunting's Persia, and a forthcoming selection of Bunting's prose, Basil Says.

FIONA WILSON is a poet and teacher. She teaches British literature at Sarah Lawrence College.