Join the Postcolonial, Race and Diaspora Studies Colloquium for this discussion.

Are we really into a “postcritical” phase of literary studies, as Rita Felski’s controversial book claims? Have we been able to successfully dismantle what she calls, following Paul Ricoeur, “the hermeneutics of suspicion”? Since her argument is firmly anchored in “literature” and practices of “reading,” I argue in this paper, we need to revisit the foundational moment of the very modern concept of “literature” in the final decades of the eighteenth century. I propose to do this with reference to colonial archives and through two phases. The first phase is concerned with what was known as ars critica or textual scholarship in the eighteenth century, and what encountered a veritable crisis with the flood of “translations” from various Oriental languages, especially after the spectacular success of the French translation of the Thousand and One Nights (1704). These so-called translations constitute the first major archive to think about the new idea of literature. The second phase deals with the East-India Company officials and their encounter with local textual practices and readings in South Asia, primarily with Sanskrit as a linguistic system and a host of legal and literary tracts. Through these two archives, I suggest, we encounter a much more complex relationship between literary texts and critical readings, and a very different paradigm than the one Felski allows for.

Baidik Bhattacharya teaches English literature at the University of Delhi. He is the co-editor of The Postcolonial Gramsci (2012). His most recent publications include Postcolonial Writing in the Era of World Literature: Texts, Territories, Globalizations (Routledge, 2018), “On comparatism in the colony: Archives, methods, and the project of Weltliteratur” (Critical Inquiry, 2016) and “Reading Rancière: Literature at the Limit of World Literature” (New Literary History, 2017). 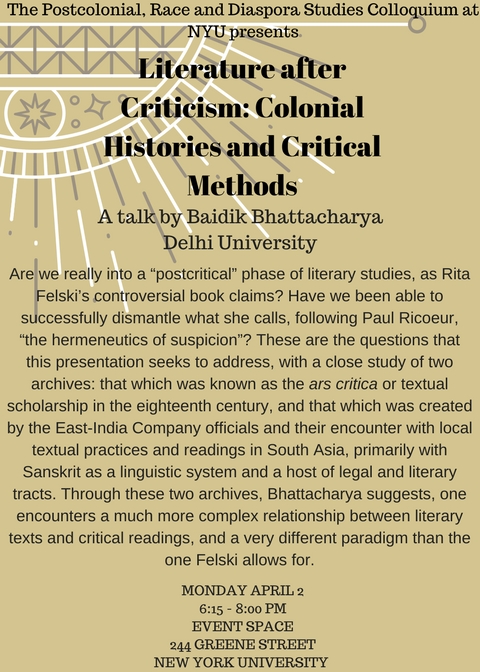