This interview was conducted with Viennale ExtraVALUE Film Award winner and current Deutsches Haus at NYU Filmmaker-in-Residence, Friedl Kubelka vom Gröller, to discuss her multi-day film series program at Anthology Film Archives. Throughout our conversation, we learned about her psychoanalytic training, her career trajectory, as well as her photography and film schools in Austria. 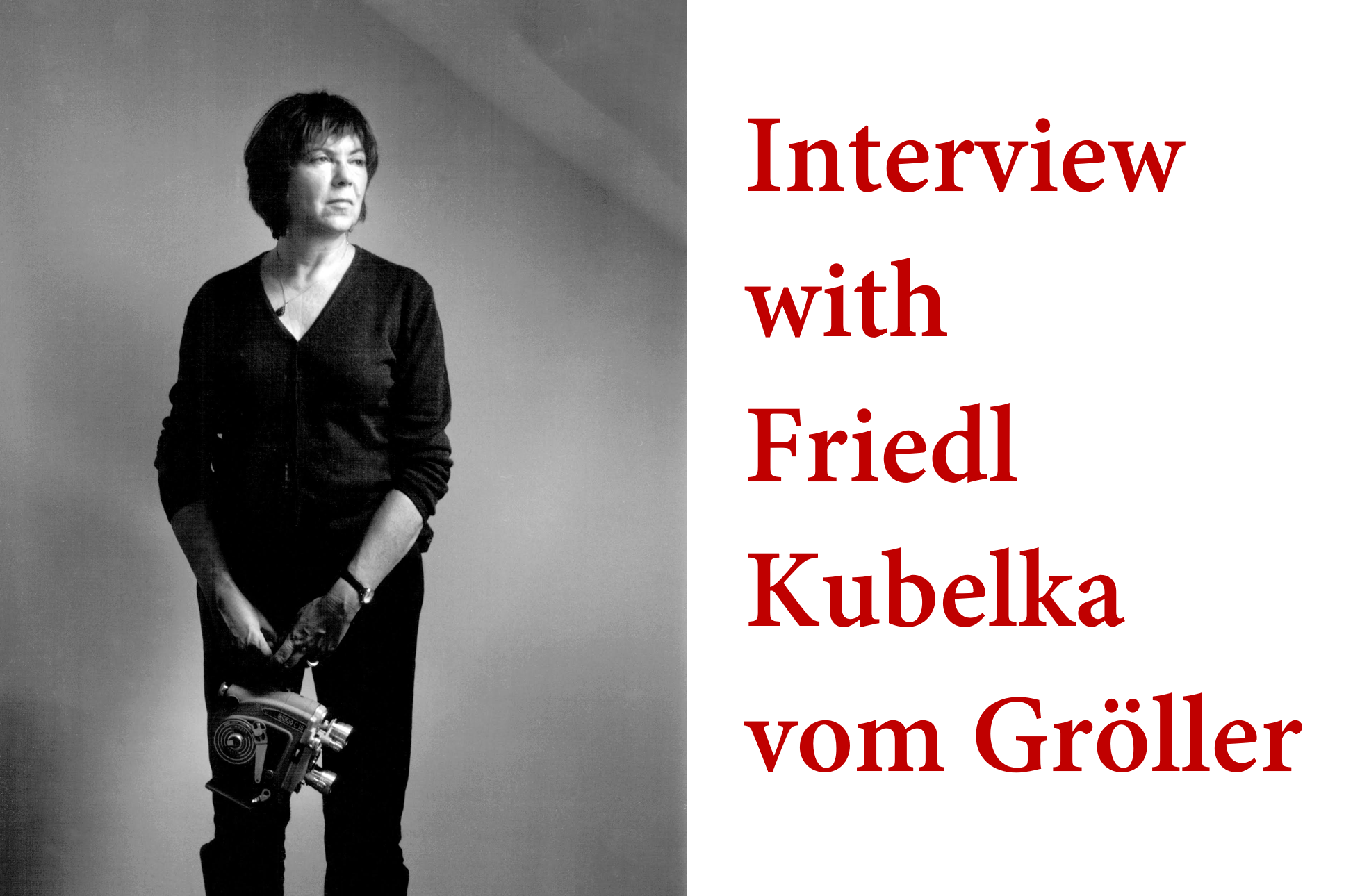 How did your journey as an artist begin?

I started to work when I was 15 years old. The situation then, with my family in Austria, was strained and so I was working as an apprentice. During this apprenticeship, I had a colleague who photographed, and with the little money I had, I bought a little Russian camera and started to photograph. It was a new style of photography that she and her lover did and I tried to copy it. At this point, I was 16 or 17 years old.

Life in Vienna was very dull and very restrictive. I tried to create possibilities for myself with the help of photography. I took the camera as a pretext to have adventures and to get to know people that I wouldn’t have had access to as a woman. At that time women were not active in society. To be an artist in those times was considered such a high position, and the male artists would turn their noses up at you, even the ones who did not have success. It took me until 77 to slowly consider myself an artist.

Could you please speak about your self-portrait series "Pin-Ups" and how it developed?

When I worked by myself in the darkroom developing films, I was by myself for 20/30 hours. In my studio, I had a mirror leaning on the wall. I started to unconsciously look and dance in front of the mirror, changing my dresses to dance in. I was dancing to find another self, a more fashionable, happier person. I made the first auto portraits of myself in that mirror. As a professional photographer, I did not consider this artwork but when I showed them around they were considered feminist artwork and still sell today.

The self-portrait series “Jahresportraits” began also in 1972 and started as portraits and then became more like a diary: who did I meet?, my daughter growing up, etc.

How did you choose intervals of five years to repeat the project?

After the first year that I did it, I thought, this is it. But then since I had learned so much about myself through doing the series and realized I was completely different than what I thought I was, having been depressed and lonesome, even though I had become a photographer and had many love affairs. After five years I was with Peter Kubelka and I felt that I had started a new life. I wanted to see how I changed. Five years later I had a child and felt the need to continue. This project has been one of my more courageous moments, to face myself and the discomfort that comes with knowing yourself.

My work was driven mainly to show myself something I was unable to see. This may seem to be a contradiction. It doesn’t mean that people regarding me as an artist do not have an impact on me. It means that even if people like the films or they don’t like them, for me making them is the most important part. In many of my works, I seek a reflection of myself. I need the reflection because I have an existentialist mindset always, a sentiment that was very prevalent after the war.

Of course, the image of an artist is influenced by those around you. Only recently did I call myself a filmmaker because the independent American filmmakers were also for me in a exclusive position, especially when I got to know them. I thought it is better for me and my work that I stay a photographer who films. I did this for over 20 years because it was easier. There was only a short period in my life where I wanted a name, to have an exhibition. It was always about making my life easier for myself through the pretext of photography and filming, having a result, and scrutinizing myself and others.

Could you speak more about your psychoanalytic training? What persuaded you to seek out this career path, and has this part of your professional life influenced how you approach your art?

The desire was born out of a crisis in photography. I had made a series of my mother and a series of my daughter- over 18 years every Monday- so I was very interested in the psyche of other people. Somehow I didn’t know how to continue in photography and had a crisis. I knew I would always be able to make nice decent portraits, what I had learned in school, but I realized that maybe new formal solutions like the “1000 part portrait” have an end, which shocked me.

I started to teach photography and always brought a therapist with me to the class because I was teaching “unconditional interest in the motive”. This is something that was very demanding of the students, especially because they were of the mindset that they just needed something in front of the camera to be a photographer. My teaching was the opposite, it was to take photography as a pretext to fulfill your unconscious, forbidden wishes. This should be the photographic process with yourself and what you photograph. It must not necessarily be humans because you can express all kinds of instances and destructive fantasies without humans. You can burn flowers or cut flowers with scissors or whatever. This is, of course, just an illustrative example. I wanted them to find out what their own fantasies were and what it’s like to photograph their fantasies without social judgment. This was the main thread of my photographic teaching.

When in the trajectory of your career did you move from photography to filmmaking?

I met Peter Kubelka, my first husband and filmmaker, in ‘74. I was fascinated by his film lectures. One important thing he taught me was that you should take your medium where no other medium can reach. He was analyzing the film medium and thinking: how can I make films that are not translatable in any other medium. This I wanted to apply to photography. How can I use photography so that it's not translatable in language? Many years later, when I founded the film school, I realized what I had learned being here in the States through the independent filmmakers I met here: the way of living and that for me the practice of being an artist is just as important as the art itself. The practice was not at all to sell or to make a living but to continue with what you really need to do.

I stopped making films for 20 years after I met Peter, I did only one. Jonas Mekas and Peter were good friends and happened to be in our living room and I thought, I’ll do it so I took the camera and the tripod and surprised both. I went to Peter and kissed him without any warning. This surprise is what I call “reaching in”.

While I didn’t like the “actionism” movement, I later realized I was subconsciously influenced by it. The movement states that the body of the artist is important, artists should not only use material but also themselves. You are very often influenced by things you don’t realize. What I did in many films was, for instance, doing a striptease when I was 58 because I wanted to see the reactions of men, not people I knew, not lovers, strangers. They all felt betrayed and were surprised. They had these emotions of insecurity. What does she want? Does she want to have sex or does she want to make the film? This was actionism but I didn’t really think of that, only later.

Can you tell us more about how you came to start your photography school in Austria?

I wasn’t always a teacher, having gone from furniture seller to professional photographer to artist. I was exposed to the idea in America. There was a female filmmaker, Marjorie Keller, who invited me to the University of Rhode Island to present my work. She told me she had the feeling, when I showed her my photographs, that it was a very intense presentation of myself as a person. She had a photography class at the university and asked me to come with my photographs and that was my first lecture! I was very influenced by this experience in the States. When I came back to Europe, I thought, now I want to teach.

You won the 2019 Erste Bank ExtraVALUE Film Award with your short film “L’avenir? De F.V.G?”? Could you speak about this film and its significance? How did you cast the actresses in your film?

It was strange. Aisha, the Senegalese woman, was cleaning the laundromat that I went to in Paris. I became friends with her and knew that she did a specific kind of fortune-telling using cowrie shells. The other woman I had met by chance at a theatre for people who are deaf or hard of hearing. Her name is Corrine and she was translating the film and she was so expressive. I thought: this is great. I talked to her but she was so busy and traveling with the theatre through France. With her, I really didn’t give up. I wasn’t living in Paris but every time I was there I would go to the theatre and ask for Corrine. When she was in town I brought her flowers, when she was not in town I wrote her a postcard. I always told her I wanted to film her in this laundromat which was 20 minute walk from the theatre. After one year of trying she came! Who did not come? Aisha. She was rarely on time and at the beginning of the film, you can see Corrine asking where she is. I was having a nervous breakdown. I tried to get Corrine to this laundromat for a year, and Aisha wasn’t there but finally, Aisha came.

Corrine was speaking French sign language. It is a certain talent to not be afraid to not appear beautiful, especially working in the theatre, but she was not afraid to be expressive, and humorous. It was a very organic process. I didn’t know who would be at the laundromat doing their washing. I felt so at home at this laundromat because I was friends with Aisha and was there so often, otherwise, I would not have dared to film there. In a way, it felt like my space. I wondered very much why I got the prize for this film. I have many strange films but this is one of the strangest.

What are you currently working on, and how will you spend your residency in New York? Are there any projects you are working on locally?

While I’m here I have been dedicating lots of time to preparing for the six evening screenings at the Anthology Film Archives. I’m almost 76 so I’ve been trying to prioritize rest over cultural excursions, but I continue to film and take pictures around New York. I have also been meeting old artist friends and have very much enjoyed this stay and am thankful for that.