"Eure Heimat ist unser Albtraum" / "Your Homeland is Our Nightmare" 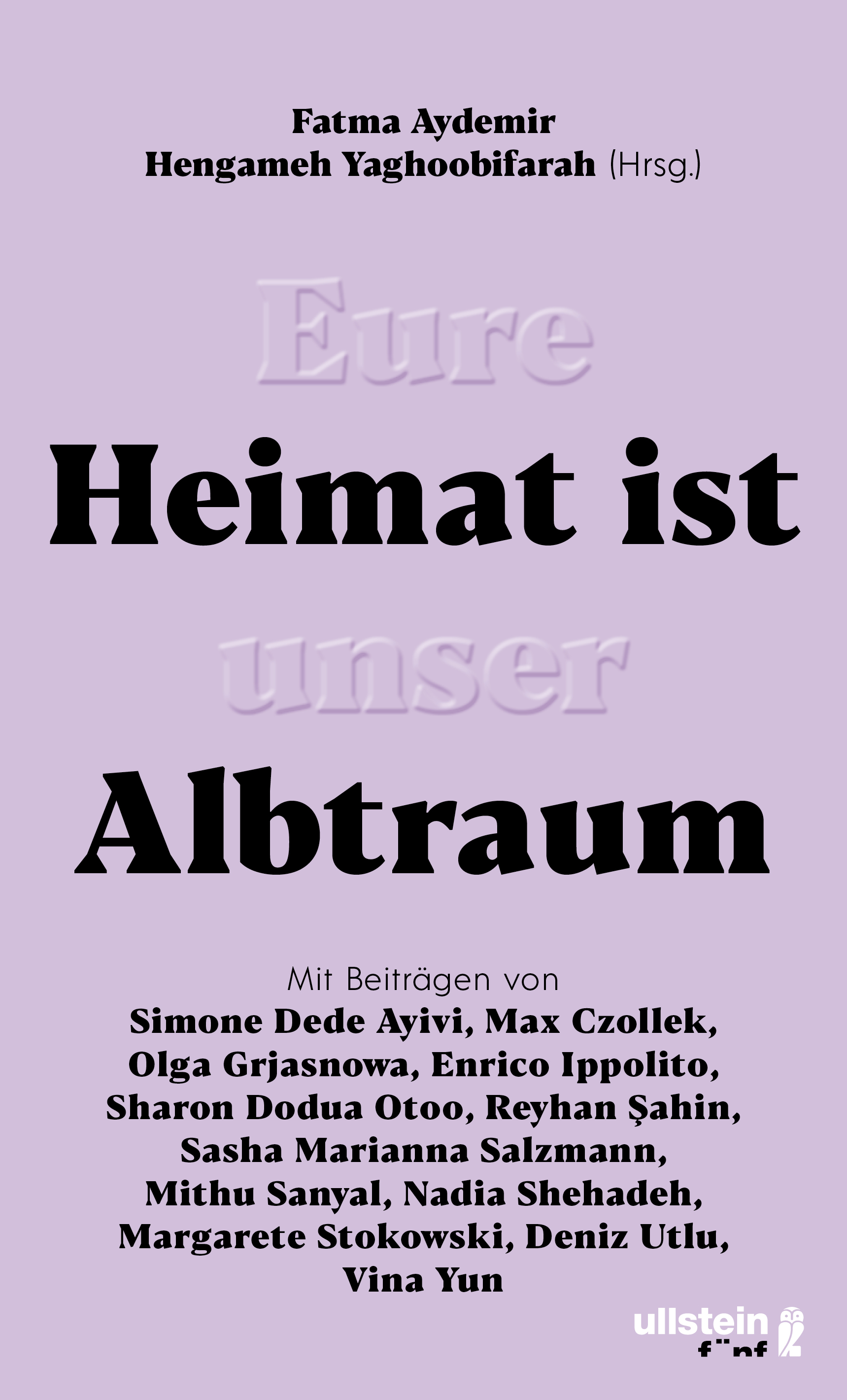 Deutsches Haus at NYU presents a conversation among Hengameh Yaghoobifarah, Sharon Dodua Otoo, Sasha Marianna Salzmann, and Jon Cho-Polizzi, which will be moderated by Tiffany Florvil to celebrate  the digital publication of the English-language translation of Your Homeland Is Our Nightmare with TRANSIT Journal.

The introduction of the controversial term Heimat (Homeland), which "has served rightwing populists and rightwing extremists as a battle cry against all those who do not correspond to this ideal—grounds for dismissing their very right to exist in this country," as Aydemir and Yaghoobifarah write in their foreword, prompted the 14 essays that comprise Eure Heimat ist unser Albtraum. In this collective work, Sasha Marianna Salzmann, Sharon Dodua Otoo, Max Czollek, Mithu Sanyal, Margarete Stokowski, Olga Grjasnowa, Reyhan Şahin, Deniz Utlu, Simone Dede Ayivi, Enrico Ippolito, Nadia Shehadeh, Vina Yun, Hengameh Yaghoobifarah, and Fatma Aydemir address "existential aspects of real life from marginalized positionalities in Germany" and ask the reader to position themselves regarding the following questions: Do I want to live in a society oriented around völkisch, racist, antisemitic, sexist, heteronormative, and trans-antagonistic structures? Or would I rather be a part of a society in which every individual—whether black and/or Jewish and/or Muslim and/or woman and/or queer and/or non-binary and/or poor and/or differently abled—is treated equally?

Our moderated panel will revisit these important questions from the perspective of 2022 and also in the context of a new German coalition government (which coincidentally has chosen to retain the name of the Homeland Ministry.)

About “Eure Heimat ist unser Albtraum” / “Your Homeland Is Our Nightmare”

Tiffany N. Florvil is an Associate Professor of 20th century European Women’s and Gender History at the University of New Mexico. She specializes in the histories of post-1945 Europe, the African/Black diaspora, and social movements, as well as Black internationalism. She has published pieces in the Journal of Civil and Human Rights and The German Quarterly. Dr. Florvil has also coedited the volume Rethinking Black German Studies: Approaches, Interventions and Histories, as well as published chapters in Gendering Post-1945 German History, To Turn this Whole World Over, and Gendering Knowledge in Africa and the African Diaspora. Her recent manuscript, Mobilizing Black Germany: Afro-German Women and the Making of a Transnational Movement, offers the first full-length study of the history of the Black German movement of the 1980s to the 2000s. Dr. Florvil is a board member of the International Federation for Research in Women’s History (IFRWH) as well as on the advisory board for the Black German Heritage and Research Association, the editorial board for Central European History, and the executive board for the Journal of Civil and Human Rights. She is an editor of the “Imagining Black Europe” book series at Peter Lang Press.

Sharon Dodua Otoo is an author and a political activist. She writes prose and essays and is editor of the English-language book series "Witnessed" (edition assemblage). In 2017 her first novellas "the things i am thinking while smiling politely" and "Synchronicity" were republished in German translation by S. Fischer Verlag. Otoo won the Ingeborg Bachmann Prize in 2016 with the text "Herr Gröttrup setzt sich hin". In 2020 her inaugural speech at the Festival of German Language Literature "Dürfen Schwarze Blumen Malen?" was published by Verlag Heyn. "Adas Raum," her first novel, appeared in 2021 with S. Fischer Verlag in German. Otoo is politically active with the Black queer feminist organisation, ADEFRA; Initiative Schwarze Menschen in Deutschland e.V. and Phoenix e.V. She lives with her family in Berlin.

Jon Cho-Polizzi is an educator and freelance literary translator. He studied Literature, History, and Translation Studies in Santa Cruz and Heidelberg, before receiving his PhD in German and Medieval Studies at UC Berkeley with a dissertation titled “A Different (German) Village: Writing Place through Migration.” Jon was managing editor for Berkeley's TRANSIT Journal, and recently guest edited the Homeland special volume of the journal containing English translations of the 2019 collection Eure Heimat is unser Albtraum. In addition to his forthcoming translations of Sharon Dodua Otoo's Adas Raum and Max Czollek's Desintegriert Euch!, Jon's translations have appeared in the Jewish Museum Berlin, the Maxim Gorki Theater, taz, Jewish Currents, renk Magazin, Versopolis Poetry, and Der Spiegel, as well as in numerous anthologies. He lives and works between Northern California and Berlin.

Sasha Marianna Salzmann is a playwright, novelist, curator and director. They were the co-founder of the culture magazine freitext and the artistic director of STUDIO Я. Salzmann also co-founded NIDS – New Institute for Drama, where they gave workshops on political writing. Their theatric work is translated, shown and awarded in over 20 countries. 2017 Salzmann finished their first novel, Beside Myself, which is translated into 16 languages and won two major German awards for best debut novel. Beside Myself was on the short list for the Book Prize 2017, Premio Strega Europeo 2019 and Central European Literature Award ANGELUS. In 2021 their second novel “Im Menschen muss alles herrlich sein” was as well nominated for the the German Book Prize. (http://sashamariannasalzmann.com/)

Hengameh Yaghoobifarah, born in 1991 in Kiel, studied Media and Cultural Studies and Scandinavian Studies in Freiburg and Linköping. After a while living in Vienna, they moved to Berlin in 2014, where they has been working as an editor for Missy Magazine ever since. Hengameh Yaghoobifarah is also a freelance writer for German media outlets, for example the Habibitus column for the taz newspaper. In 2019, they joined forces with Fatma Aydemir to publish the anthology Your Homeland is our nightmare. Their debut novel Ministerium der Träume (Ministry Of Dreams) was published in 2021.

“Eure Heimat ist unser Albtraum / Your Homeland Is Our Nightmare” is funded by the DAAD from funds of the German Federal Foreign Office (AA).