"When Paul Came Over the Sea:" Borders and (In)Humanity 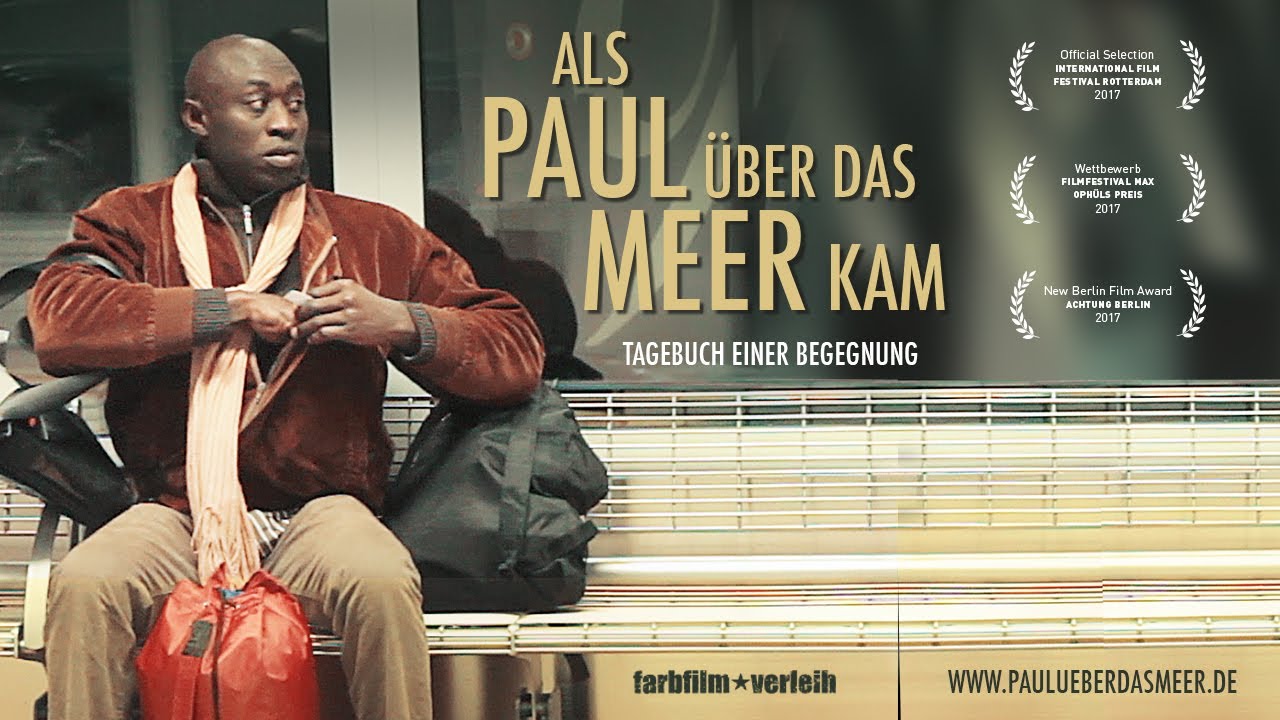 As part of KINO!2018, Deutsches Haus at NYU presents a conversation about When Paul Came Over the Sea between Jakob Preuss, the film's director, Gabriella Etmektsoglou, Çiğdem Ipek, and Christian Martin, which will be moderated by Noah Isenberg.

Paul is a migrant from Cameroon. He has made his way across the Sahara to the Moroccan coast where he now lives in a forest waiting for the right moment to cross the Mediterranean Sea. This is where he meets Jakob, a filmmaker from Berlin, who is researching a film about Europe’s borders. Soon afterwards, Paul manages to cross over to Spain on an inflatable rubber boat. He survives – but half of his companions die on this tragic 50 hour odyssey. Once in Spain, instead of getting psychological help, he is sent to an immigration detention centre on a prison island. It is only upon his release that Jakob and Paul meet again, at a Red Cross shelter in Granada. Because of the economic crisis in southern Europe, Paul decides to continue on to Germany, the former colonizing power in Cameroon and the country of his dreams. When Paul comes to Jakob’s homeland, Jakob has to decide: will he become an active part of Paul’s pursuit of a better life, or remain the detached filmmaker? In the end the film takes a twist that neither Paul nor Jakob could have expected when they first met in the forest in Morocco. The film tells the story of their unusual friendship; a friendship that grew in the politically problematic context of the ongoing European debates on migration.

When Paul Came Over the Sea will be screened during KINO!2018 at the Landmark at 57 West on Sunday, April 8, at 1:30pm (with a Q&A with Marion Masone) and on Monday, April 9, at 6pm. To learn more about the film, please view the trailer and see the facebook event listing here.

Jakob Preuss, born in Berlin, is a documentary filmmaker. His films, shot in Iran, Bosnia, and Ukraine, have been broadcast in over ten countries and screened at numerous festivals. His last film “The Other Chelsea” won the First Steps-Award and the Grimme-Award in Germany. In addition to his activities as a filmmaker, Jakob Preuss is also engaged in political work. He coordinated the writing of the electoral manifesto of Bündnis 90/ The Greens for the 2014 European Elections and has worked as an adviser on European Affairs for the Greens’ parliamentary group at the German Bundestag. In the past he has also worked as desk-officer for the Commonwealth of Independent States at the NGO “Reporters without Borders” and participated in numerous Election Observation Missions mostly in the former Soviet Union and the Democratic Republic of Congo. In 2014, Jakob co-founded the initiative GehtAuchAnders, whereby artists engage with political issues and take a stance. Since 2014, he is regularly invited to speak as a migration expert, a direct result of the four years of research conducted for When Paul Came Over the Sea. Jakob Preuss holds a law degree from the Sorbonne in Paris and a Masters degree from the College of Europe, Natolin.

Gabriella Etmektsoglou is the Director of NYU Berlin and Associated Faculty, NYU Gallatin School of Individualized Study. She holds a Ph.D. in European history from Emory University. The principal concerns of her research and writing are the Holocaust in Greece, questions of reparations and transitional justice in postwar Europe, and narratives of self-victimization in present-day Germany. Etmektsoglou is the author of the book Axis Exploitation of Wartime Greece, 1941–1943. Before joining NYU in 2010, she taught subjects in Modern European History, Balkan History, and Civil Wars at universities in the U.S., Europe, and Australia. She is a founding member of the U.S. National Peace Academy and served on the Greek Official Commission of Experts on Holocaust-Era Assets. In addition to teaching at NYU Berlin, she continues to participate in conflict resolution projects in Greece and Cyprus.

Çiğdem Ipek is a Berliner of Turkish descent. She holds a degree in Social Sciences from the Humboldt-Universität zu Berlin and studied abroad at the New School University’s Graduate Faculty in New York City. Her areas of interest include migration, integration, and identity, as well as education and employment policies. Her professional experience was shaped by a range of diverse employers: the Berlin Senate and the Humboldt-Universität zu Berlin, in addition to NGOs and freelance projects. Today, Çigdem Ipek is a staff member of the Chancellery and serves as a desk officer at the Office of the Federal Government Commissioner for Migration, Refugees, and Integration.

Noah Isenberg (moderator) is Professor of Culture and Media at the New School’s Eugene Lang College of Liberal Arts, in New York City, where he teaches film history, theory, and criticism and also serves as the director of Screen Studies. He holds a joint appointment in the multi-disciplinary M.A. program in Liberal Studies at the New School for Social Research. The author of, among others, Edgar G. Ulmer: A Filmmaker at the Margins (California, 2014), which the New York Times hailed as “a page turner of a biography” and the Huffington Post selected among its Best Film Books of 2014, his latest book is We’ll Always Have ‘Casablanca’: The Life, Legend, and Afterlife of Hollywood’s Most Beloved Movie. A graduate of the University of Pennsylvania (B.A. in European history, 1989), he holds advanced degrees from the University of Washington (M.A. in German literature, 1991) and the University of California at Berkeley (Ph.D. in German studies, 1995). He has spent extended stints—studying, teaching, writing—in Berlin, Vienna, Munich and Stockholm.

"When Paul Came Over the Sea:" Borders and (In)Humanity is a DAAD-sponsored event.

Additional support is provided by the Rosa Luxemburg Stiftung.