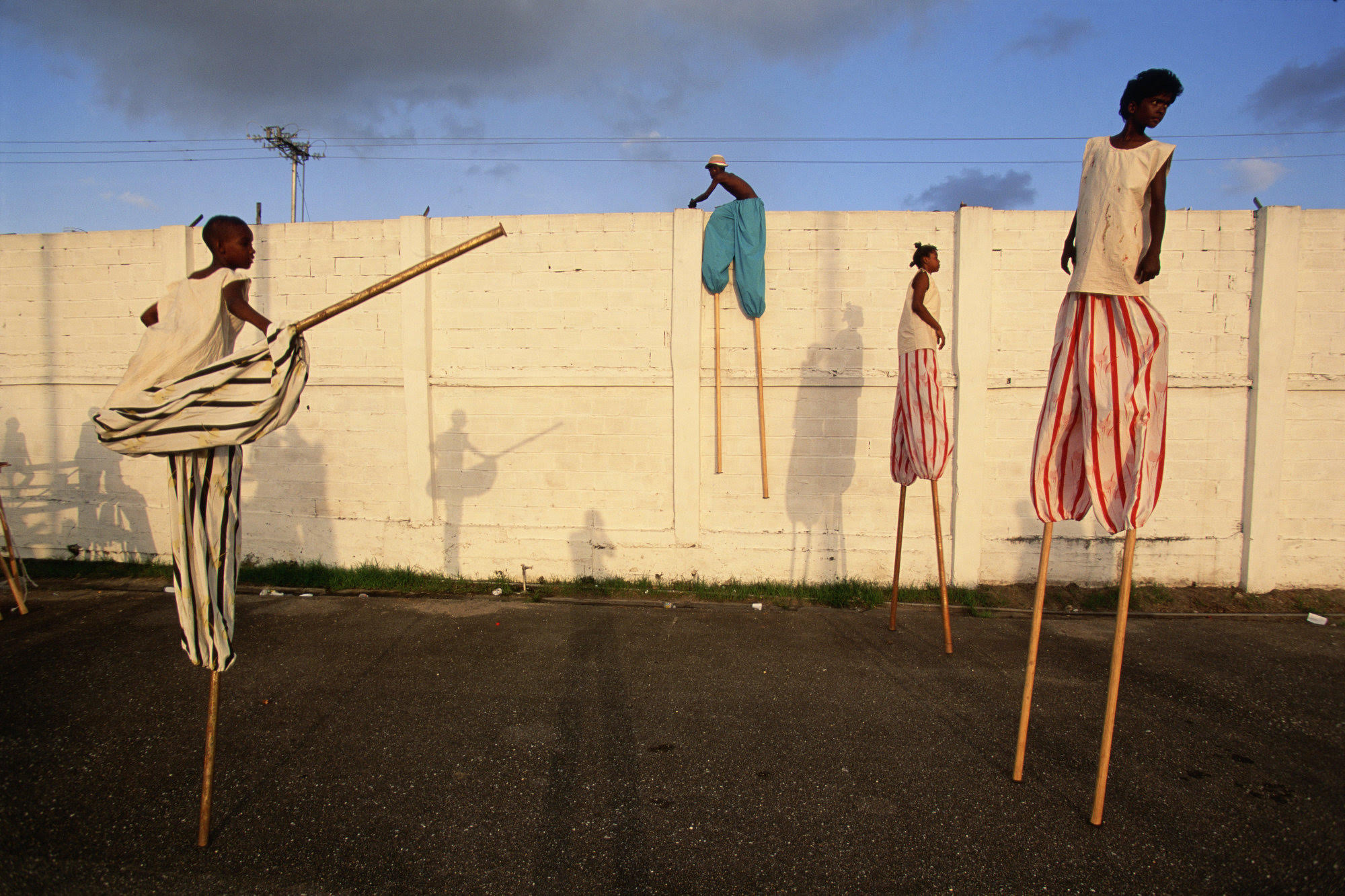 Deutsches Haus at NYU presents the exhibition "MOKO JUMBIES: The Dancing Spirits of Trinidad," a photo essay by the photographer Stefan Falke about a stilt walking school in Cocorite, Trinidad. Please join us for the exhibition opening and an artist talk between Stefan Falke and the artist Laura Anderson Barbata on Monday, February 12, at 6 pm.

“Dragon" Glen de Souza founded the Dragon Keylemanjahro School of Art & Culture in Cocorite, a suburb of Port of Spain, the capital of Trinidad and Tobago, in 1986. The main purpose of the school is to keep children off the streets and away from drugs. Searching for artistic activities to engage them in, he rediscovered the art of stilt-walking, a tradition known in West Africa as the Moko Jumbies, protectors of the villages and participants in religious ceremonies. The art was brought to Trinidad by the slave trade but was forgotten soon after. Dragon Glen De Souza can be credited with bringing this tradition back to Trinidad and Tobago in a large scale fashion. Today his school has over 100 members from age 4 and up.

The stilts are made by Dragon and his students and can be as high as 12-15 feet. The children show their artistic talents mostly at the annual Carnival (celebrated in Trinidad and Tobago on February 12 and 13), which today is unthinkable without the presence of the Moko Jumbies. A “band" can have up to 80 children on stilts and they have won many of the prestigious prizes and trophies that are awarded by the National Carnival Commission. Designers like Peter Minshall , Brian Mac Farlane and Laura Anderson Barbata create dazzling costumes for the school which are admired by thousands of spectators. Besides stilt-walking the children learn the limbo dance, drumming, fire blowing (often all done on stilts) and how to ride unicycles.

Between 1997 and 2004 New York City based photographer Stefan Falke took countless trips to Trinidad and Tobago to work on this essay which resulted in the book "MOKO JUMBIES: The Dancing Spirits of Trinidad”, published by Pointed Leaf Press. The images were in the official selection of the photo-journalism festival Visa Pour L'image in Perpignan, France, in 2004. This is the first time they're exhibited in New York.

Stefan Falke is a German born photographer who lives in New York City and works for international magazines, film studios and corporate clients. He has published two books: “MOKO JUMBIES: The Dancing Spirits of Trinidad”, about a stilt walking  school in Trinidad, and “LA FRONTERA”, for which he photographed 200 artists on both sides of the entire 2000 miles long US-Mexico border to document the vibrant cultural activities in that region.

Laura Anderson Barbata was born in Mexico City, and works in Brooklyn and Mexico City. Since 1992 she has worked primarily in the social realm, and has initiated projects in the Amazon of Venezuela, Trinidad and Tobago, Mexico, Norway and the USA. Among them is her ongoing project The Repatriation of Julia Pastrana, initiated in 2004.  She is also known for her project Transcommunality(ongoing since 2001), with traditional stilt dancers: The Brooklyn Jumbies fromNew York, West Africa and the Caribbean, and los Zancudos de Zaachila, from Oaxaca, Mexico.  This project has been presented at various museums, public schools and avenues, among them The Museum of Modern Art New York; TheModern Museum Fort Worth Texas; Museo Textil de Oaxaca, México; Museo de la Ciudad de México; BRIC, New York and Rutgers University, among others.