"Berlin Alexanderplatz": An Evening with Ian Buruma and Michael Hofmann 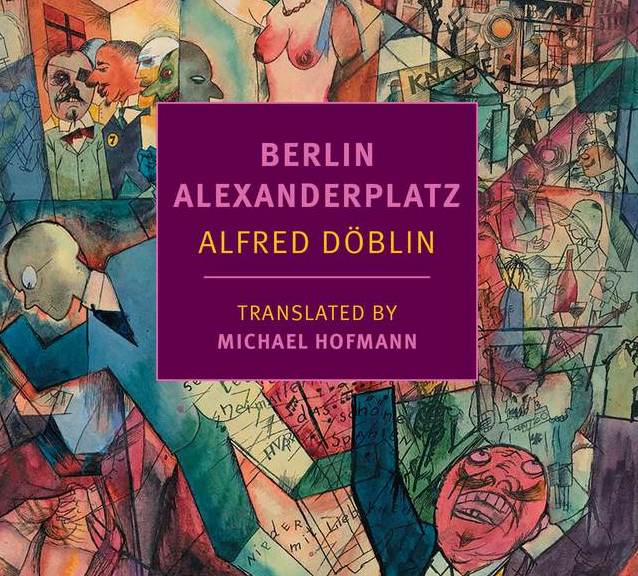 On the occasion of the publication of Michael Hofmann's new translation of Alfred Döblin’s novel Berlin Alexanderplatz, Deutsches Haus at NYU and New York Review Books present a reading and conversation between Hofmann and Ian Buruma, the editor of The New York Review of Books. Alfred P. Doblin, the author’s grandson, will read a short part of the new translation and share some remarks at the beginning of the event.

Berlin Alexanderplatz, the great novel of Berlin and the doomed Weimar Republic, is one of the most celebrated books of the twentieth century, gruesome, farcical, and appalling, word drunk, pitchdark. In Michael Hofmann’s extraordinary new translation, Alfred Döblin’s masterpiece lives in English for the first time.

As Döblin writes in the opening pages (as translated here by Michael Hofmann):

The subject of this book is the life of the former cement worker and haulier Franz Biberkopf in Berlin. As our story begins, he has just been released from prison, where he did time for some stupid stuff; now he is back in Berlin, determined to go straight. To begin with, he succeeds. But then, though doing all right for himself financially, he gets involved in a set-to with an unpredictable external agency that looks an awful lot like fate. Three times the force attacks him and disrupts his scheme. The first time it comes at him with dishonesty and deception. Our man is able to get to his feet, he is still good to stand. Then it strikes him a low blow. He has trouble getting up from that, he is almost counted out. And finally it hits him with monstrous and extreme violence.

Michael Hofmann's new translation of Berlin Alexanderplatz will be on sale at the event courtesy of New York Review Books.

Michael Hofmann is a poet, translator, and essayist. He was born in Freiburg, Germany, and moved to the UK at age four. When his family returned to Germany, Hofmann stayed behind, first at boarding schools and later Magdalene College, Cambridge University, where he earned his BA and MA. His first book of poetry, Nights in the Iron Hotel (1983), earned him instant acclaim in Britain. His second book, Acrimony (1986), won a Geoffrey Faber Memorial Prize. Hofmann’s other collections of poetry include K.S. in Lakeland: New and Selected Poems (1990), Corona, Corona (1993), Approximately Nowhere (1999), and Selected Poems (2009). Hofmann has translated more than 70 books from German, including works by Hans Fallada, Franz Kafka, Ernst Jünger, Joseph Roth, and Wim Wenders. He is the editor of the anthologies After Ovid: New Metamorphoses (1994) and Twentieth Century German Poetry (2006). Hofmann regularly publishes reviews and essays in the London Review of Books and Poetry magazine. His essays have been collected in two volumes, Behind the Lines: Pieces on Writing and Pictures (2002) and Where Have You Been? (2014). Hofmann is the recipient of numerous honors and awards for his poetry and translations, including a Cholmondeley Award, an IMPAC Dublin Literary Award, a PEN/Book-of-the-Month Club Translation Prize, an Oxford-Weidenfeld Translation Prize, and a Helen and Kurt Wolff Translator’s Prize. A member of the American Academy of Arts and Sciences and the Deutsche Akademie der Künste, Hofmann teaches full time at the University of Florida.

Ian Buruma is the editor of the New York Review of Books. He was educated in Holland and Japan, where he studied history, Chinese literature, and Japanese cinema. He lived in Tokyo in the 1970s, where he acted in Kara Juro’s Jokyo Gekijo and participated in Maro Akaji’s butoh dancing company Dairakudakan.  In the 1980s, he worked as a journalist travelling and reporting from all over Asia. He was Cultural Editor of The Far Eastern Economic Review, Hong Kong (1983–86) and Foreign Editor of The Spectator, London (1990–91), and has been a Fellow at the Wissenschaftskolleg, Berlin, the Woodrow Wilson Center, Washington D.C., St. Antony’s College, Oxford, and Remarque Institute, NYU. He is currently Paul W. Williams Professor of Democracy, Human Rights, and Journalism at Bard College in Annandale-on-Hudson, NY. Ian Buruma was awarded the Erasmus Prize (2008), the Shorenstein Journalism Award (2008), the Abraham Kuyper Prize at the Princeton Theological Seminary (2012), and was voted as one of the Top 100 Public Intellectuals by the Foreign Policy/Prospect magazines (2008 and 2010). He won the Los Angeles Times Book Prize for the Best Current Interest Book for his book Murder in Amsterdam: The Death of Theo van Gogh and the Limits of Tolerance (Penguin USA), as well as the 2015 PEN/Diamondstein-Spielvogel Award for the Art of the Essay for Theater of Cruelty. Buruma now writes about a broad range of political and cultural subjects for major publications, most frequently for The New York Review of Books, The New Yorker, The New York Times, The Guardian, La Repubblica, and NRC Handelsblad. His most recent book, A Tokyo Romance: A Memoir, was published in 2018.

“Berlin Alexanderplatz”: An Evening with Ian Buruma and Michael Hofmann is a DAAD-sponsored event.