All the Frequent Troubles of our Days: A Conversation with Rebecca Donner and Atina Grossmann

Deutsches Haus at NYU presents a conversation with Rebecca Donner and Atina Grossmann about Donner’s new book “All the Frequent Troubles of Our Days: The True Story of the American Woman at the Heart of the German Resistance to Hitler,” which tells the story of Mildred Harnack – Donner’s great-great-aunt – an American scholar in Berlin who headed an underground resistance group against Nazi rule. The conversation will focus on Harnack’s remarkable story, meticulously researched in East German, Soviet and American archives and supplemented with family lore, and what lasting lessons we can draw from Harnack’s acts of resistance today. 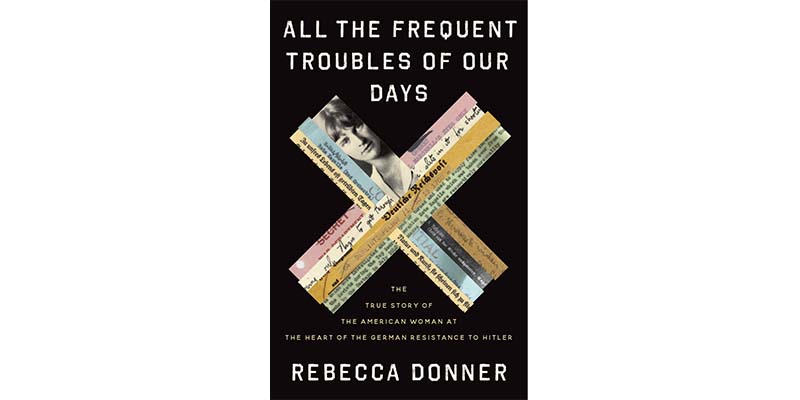 About “All the Frequent Troubles of Our Days: The True Story of the American Woman at the Heart of the German Resistance to Hitler:”

Born and raised in Milwaukee, Mildred Harnack was twenty-six when she enrolled in a PhD program in Germany and witnessed the meteoric rise of the Nazi party. In 1932, she began holding secret meetings in her apartment—a small band of political activists that by 1940 had grown into the largest underground resistance group in Berlin. She recruited working-class Germans into the resistance, helped Jews escape, plotted acts of sabotage, and collaborated in writing leaflets that denounced Hitler's regime. Her coconspirators circulated through Berlin under the cover of night, slipping the leaflets into mailboxes, public restrooms, phone booths. When the first shots of the Second World War were fired she became a spy, couriering top-secret intelligence to the Allies. On the eve of her escape to Sweden, she was ambushed by the Gestapo. At a Nazi military court, a panel of five judges sentenced her to six years at a prison camp, but Hitler overruled the decision and ordered her execution. On February 16, 1943, she was strapped to a guillotine and beheaded.

Harnack’s great-great-niece Rebecca Donner draws on her extensive archival research in Germany, Russia, England, and the U.S. as well as newly uncovered documents in her family archive to produce this astonishing work of narrative nonfiction. Fusing elements of biography, real-life political thriller, and scholarly detective story, Donner brilliantly interweaves letters, diary entries, notes smuggled out of a Berlin prison, testimony of survivors, and a trove of declassified intelligence documents into a powerful, enthralling story, reconstructing the moral courage of an enigmatic woman nearly erased by history.

Rebecca Donner is the author of the New York Times bestseller All the Frequent Troubles of Our Days, published by Little, Brown in the US and Canongate in the UK. A Hebrew translation is forthcoming from Matar Publishing in Israel.

Born in Canada, Rebecca Donner was educated at the University of California at Berkeley and Columbia University. She is the author of Sunset Terrace, a critically acclaimed novel, and Burnout, a graphic novel about ecoterrorism. Her essays, reportage, and reviews have appeared in numerous publications, including the New York Times and Bookforum.

Atina Grossmann (moderator) is Professor of History in the Faculty of Humanities and Social Sciences at the Cooper Union in New York City. Publications include Jews, Germans, and Allies: Close Encounters in Occupied Germany (2007, German 2012), Wege in der Fremde: Deutsch-jüdische Begegnungsgeschichte zwischen New York, Berlin und Teheran (2012), and Reforming Sex: The German Movement for Birth Control and Abortion Reform, 1920-1950 (1995); co-edited volumes on Crimes of War: Guilt and Denial in the Twentieth Century (2002) and After the Nazi Racial State: Difference and Democracy in Germany and Europe (2009), as well as Shelter from the Holocaust: Rethinking Jewish Survival in the Soviet Union (with M.Edele and S. Fitzpatrick) and The JDC at 100 (with A Patt, L. Levi, M. Maud). Her current research focuses on “Remapping Survival: Jewish Refugees and Lost Memories of Displacement, Trauma, and Rescue in the Soviet Union, Iran, and India,” as well as the entanglements of family memoir and historical scholarship.

“All the Frequent Troubles of Our Days: A Conversation with Rebecca Donner and Atina Grossmann” is funded by the DAAD from funds of the German Federal Foreign Office (AA).