Society in Transition: A Transatlantic Conversation on Black Lives Matter

Join us for the first event in a series of Transatlantic Tandem Talks, a live, one-hour virtual discussion featuring Dr. Silke Hackenesch from the University of Cologne in Germany and Dr. Tiffany Florvil from the University of New Mexico in the U.S. Their tandem talk “Society in Transition: A Transatlantic Conversation on Black Lives Matter” will include an interactive Q&A session.

Register for this event here. 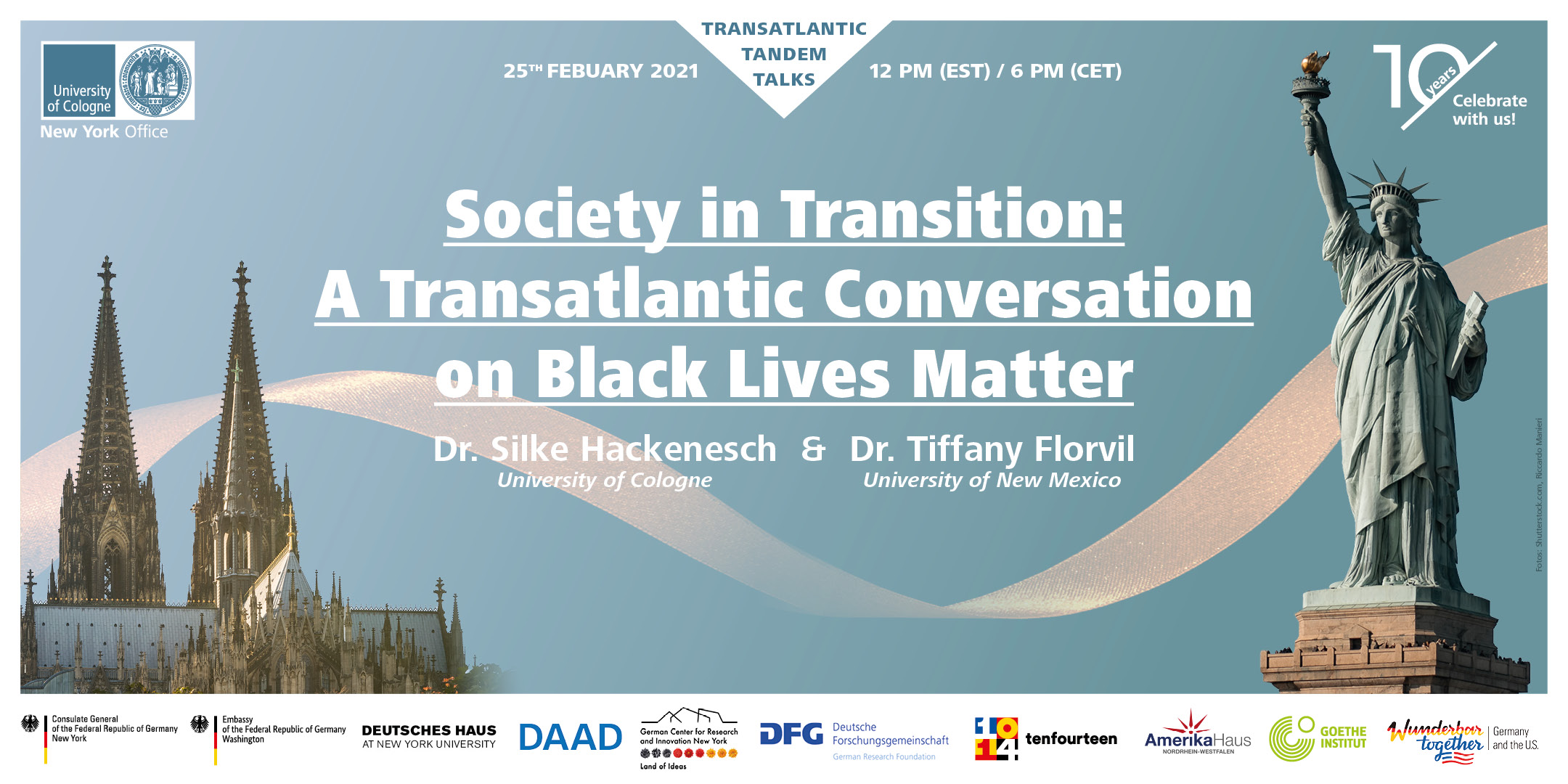 Black Lives Matter is now a global political and social movement. In 2013, three African American women created the hashtag in response to racism targeted at African Americans and in support of civil rights for other marginalized communities. This protest movement has resonated with Black, Indigenous, and other people of color across the world, including in Germany.

In this Transatlantic Tandem Talk, Dr. Silke Hackenesch and Dr. Tiffany Florvil will contextualize the year 2020, which witnessed not only a global pandemic that highlighted various inequalities, but also a surge of protests and political mobilization after the killing of George Floyd. Abundant digital technology disseminated news and corresponding imagery worldwide as events unfolded in real time. The simultaneity of events and the circulation of images spurred solidarity movements across the Atlantic. These forms of digital connectivity gained further importance as a result of the restrictions the pandemic has caused on travel and face-to-face social interaction.

Driven by their research, Dr. Hackenesch and Dr. Florvil created a jointly taught innovative online class on Black Lives Matter at the University of New Mexico and the University of Cologne through the DAAD-funded program International Virtual Academic Collaboration (IVAC). This format allows students who might not have considered going abroad to participate in an interactive transatlantic conversation. Join the two tandem scholars as they reflect on the groundbreaking dialogue between students in Cologne who are studying race and Blackness in the U.S. context and students in Albuquerque who are studying race and Blackness in the European context, as well as how digitalization is catalyzing these topics and exchanges.

The Transatlantic Tandem Talks are presented on the occasion of the 10th anniversary of the North America office of the University of Cologne in New York in cooperation with its partners, the Consulate General of the Federal Republic of Germany New York; the Embassy of the Federal Republic of Germany Washington, D.C.; Deutsches Haus at NYU; DAAD New York; the German Research Foundation (DFG) North America; the German Center for Research and Innovation (DWIH) New York; 1014 Space for Ideas; the Goethe-Institut New York; AmerikaHaus NRW; and Wunderbar Together.

Welcoming and opening remarks by:

Dr. Silke Hackenesch is an Associate Professor at the Institute for North American History at the University of Cologne. She specializes in 20th century Childhood and Adoption Studies, African American History, Commodity History, and Black Diaspora Studies. Dr. Hackenesch is the author of Chocolate and Blackness: A Cultural History (Campus, 2017). She has published articles in Historische Anthropologie, Food and History, and Comparativ: Zeitschrift für Globalgeschichte und vergleichende Gesellschaftsforschung, as well as chapters for Rethinking Black German Studies, Kinder des Zweiten Weltkrieges, and Race & Sex: Eine Geschichte der Neuzeit. Currently, she is working on a manuscript titled “Colorblind Love or Racial Responsibility? The Adoption of Black German Children to Postwar America,” which analyzes the contested debates the transnational adoption of Black German children elicited in the (African) American community, from civil rights organizations to social work professionals and individual adoption advocates. Her forthcoming publications include the edited volume Adopting Children Across Race and Nations: Histories and Legacies with Ohio State University Press and book chapters on Sojourner Truth. Dr. Hackenesch serves as a board member for the book series “Imagining Black Europe” at Peter Lang Publishing. Her research has been generously supported by the German Academic Exchange Service (DAAD), the Thyssen Foundation, the German Research Foundation (DFG), the Society for the History of Children and Youth (SHCY), the Alliance for the Study of Adoption and Culture (ASAC), the University of Cologne, and the German Historical Institute in Washington, DC. Her work has been featured in the New York Times, on Deutschlandfunk, and in blogs and podcasts.

Dr. Tiffany N. Florvil is an Associate Professor of 20th century European Women’s and Gender History at the University of New Mexico. She specializes in the histories of post-1945 Europe, the African/Black diaspora, and social movements, as well as Black internationalism. She has published pieces in the Journal of Civil and Human Rights and The German Quarterly. Dr. Florvil has also coedited the volume Rethinking Black German Studies: Approaches, Interventions and Histories, as well as published chapters in Gendering Post-1945 German History, To Turn this Whole World Over, and Gendering Knowledge in Africa and the African Diaspora. Her recent manuscript, Mobilizing Black Germany: Afro-German Women and the Making of a Transnational Movement, offers the first full-length study of the history of the Black German movement of the 1980s to the 2000s. Dr. Florvil is a board member of the International Federation for Research in Women’s History (IFRWH) as well as on the advisory board for the Black German Heritage and Research Association, the editorial board for Central European History, and the executive board for the Journal of Civil and Human Rights. She is an editor of the “Imagining Black Europe” book series at Peter Lang Press.