Open Austria Art + Tech Lab and Deutsches Haus at NYU present a conversation between renowned author Daniel Kehlmann and philosopher and AI researcher Bryan McCann, who will discuss collaborating on “AI Storytelling,” an innovative project in which they jointly explore and experiment with the process of creating new stories by working with an NLP-based (natural language processing) algorithm named CTRL. Kehlmann reflects on this creative collaboration between art and technology and on the challenges of human and artificial creativity in his widely acclaimed new essay “Mein Algorithmus und ich” [My Algorithm and Me], from which he will read in the essay’s congenial English translation by Ross Benjamin during the event. The conversation between Kehlmann and McCann will be moderated by Clara Blume (head of Open Austria’s Art and Tech Lab) and will include a live demonstration of Kehlmann’s collaboration with CTRL, providing insight into which formats proved more successful than others. 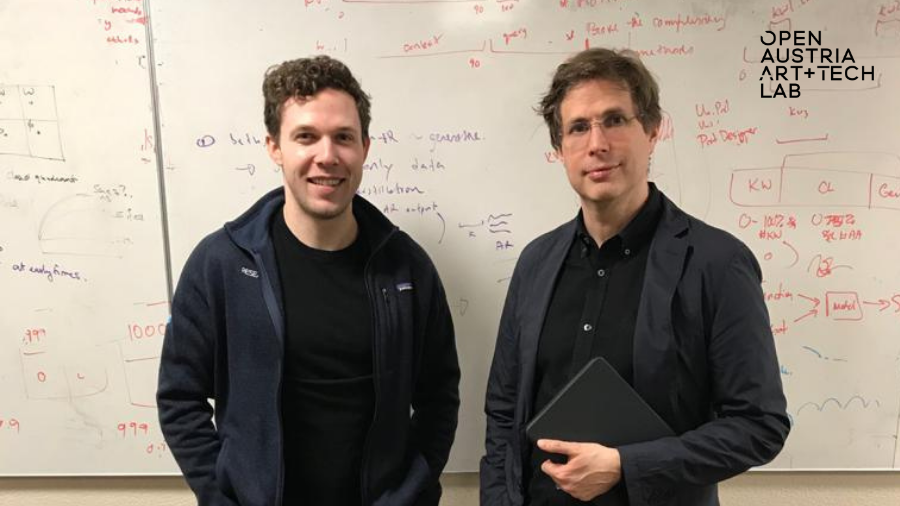 About the “AI Storytelling” project:

Storytelling connects us with each other and our world. We channel ourselves through language in ways that span temporal and spatial divides, and our use of language creates a trove of meaning waiting to be examined. This project, initiated by the Open Austria Art + Tech Lab in Feb 2020, brought together two storytellers: Daniel Kehlmann, renowned German-language novelist and playwright, and Bryan McCann, a philosopher and scientist of natural language. Together, they explored the role that artificial intelligence tools called language models might play in storytelling. Language models are trained to predict which words are most likely to occur given a prompt from the user -- the words, to borrow Calvino's phrase, likely to "give birth to one another." McCann had designed a new language model called CTRL to give users more control over the AI text generation process. Working together, Kehlmann and McCann explored a novel mode of storytelling that integrates AI as a collaborator. While CTRL generated suggestions based on internalized statistical patterns of language use, Kehlmann deftly wove those suggestions together, at times cutting them, diverting them, or subverting them, in order to "test the extent to which words could fit with one another." By offering a mechanism to defamiliarize well-worn patterns of language, this story of “AI Storytelling” produced moments of surprise, laughter, disappointment, and inspiration. In doing so, it contributes to a broader narrative of how AI might be used as a tool of self-reflection, allowing us to investigate our language, our stories, our histories, and ourselves.

Daniel Kehlmann is an Austro-German novelist and playwright. His works have won the Candide Prize, the Hölderlin Prize, and the Thomas Mann Prize. He was a fellow at the Dorothy and Lewis B. Cullman Center for Scholars and Writers at the New York Public Library in 2016–17. His last novel, Tyll, was shortlisted for the International Booker Prize and is currently being adapted as a TV show for Netflix.

Bryan McCann is currently Co-founder and CTO at You.com building a new search experience. Previously, he was a Lead Research Scientist at Salesforce Research in Palo Alto where he worked on Deep Learning and its applications to Natural Language Processing and Natural Language Understanding. His research focused on transferring knowledge between AI systems, creating AI that is more general and unified in the way that it approaches natural language tasks, and AI that can generate sequences of symbols -- both with words, as in English, but also with amino acids, as in proteins -- based on input specifications from a user. He obtained an M.S. and B.S. in Computer Science focusing on Artificial Intelligence as well as a B.A in Philosophy from Stanford University.

Clara Blume, Ph.D. (moderator), works as a European cultural diplomat and artist in Silicon Valley, heading the Open Austria Art + Tech Lab to explore the interplay of human and artificial creativity. Set out as a laboratory for open and interdisciplinary collaboration, Blume curates, commissions, and promotes art projects that redefine what it means to be human in the age of artificial intelligence. As President of the EU National Institutes for Culture Cluster in the Bay Area (EUNIC Silicon Valley) in 2019 and 2020, Blume spearheaded the creation of the art and technology network The Grid (Art Powers Technology), supported with funding by the European Commission and Salesforce. Prior to her new role in cultural diplomacy, she worked as a professional musician, songwriter, and internationally touring recording artist for almost 15 years. Blume studied music composition and fine arts at Academia de Bellas Artes, Universidad Complutense de Madrid (Spain). She holds a M.A. in comparative literature and a Ph.D. in cultural studies and history from the University of Vienna. Blume is a regular conference speaker and a published author.

Attendance information:
To RSVP for this event, please click here. Registration is (as always) free and open to the general public. Only registered attendees will receive Zoom webinar information via email prior to the event. You can download Zoom here.