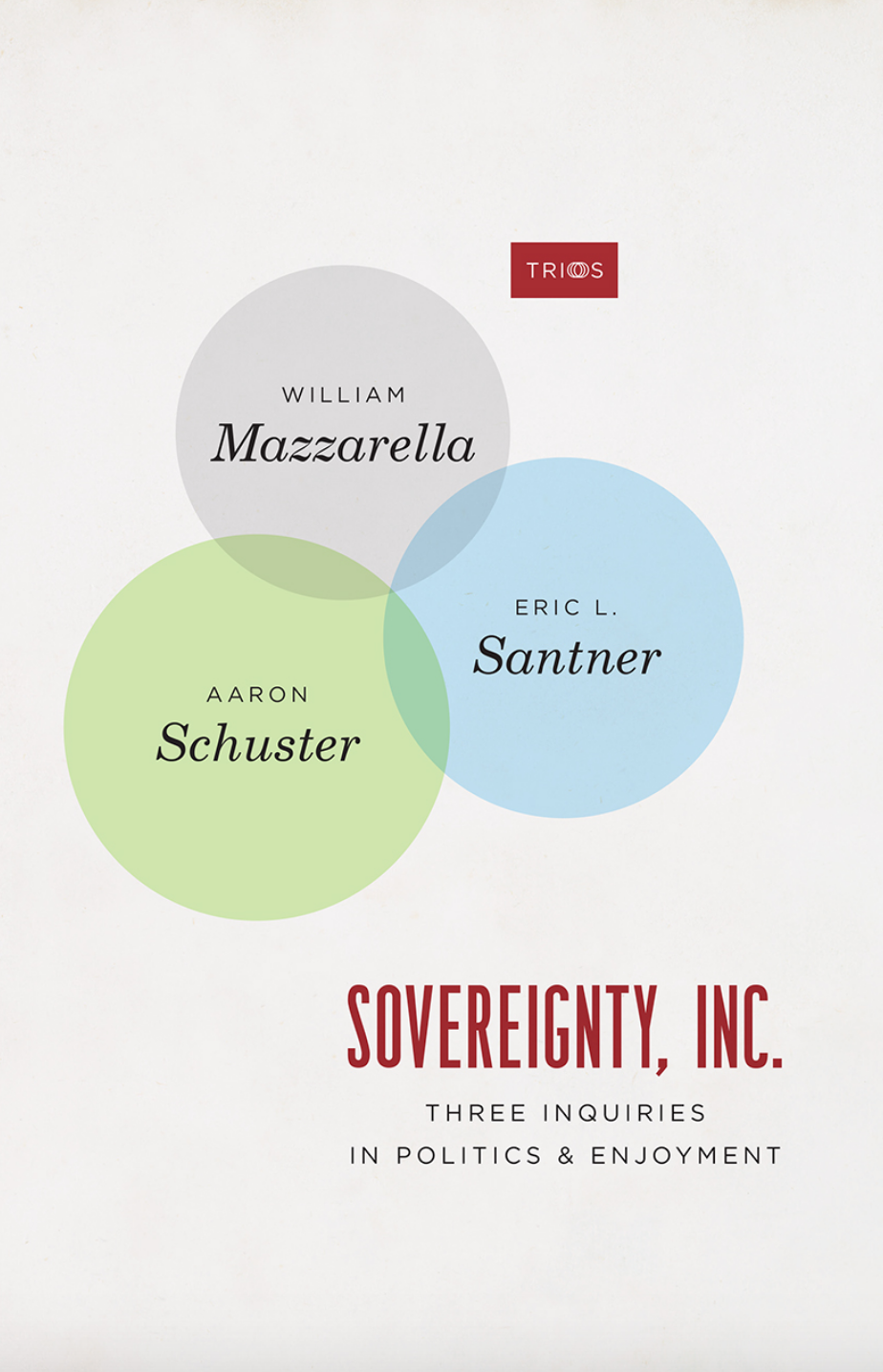 Deutsches Haus at NYU and the Department of German NYU present “Sovereignty, Inc.: Three Inquiries in Politics and Enjoyment,” a conversation among William Mazzarella, Eric Santner, Aaron Schuster, and Elisabeth Bronfen on the book’s main theories.

What does the name Trump stand for? If branding now rules over the production of value, as the coauthors of Sovereignty, Inc. argue, then Trump assumes the status of a master brand whose primary activity is the compulsive work of self-branding—such is the new sovereignty business in which, whether one belongs to his base or not, we are all “incorporated.”

Drawing on anthropology, political theory, philosophy, psychoanalysis, and theater, William Mazzarella, Eric L. Santner, and Aaron Schuster show how politics in the age of Trump functions by mobilizing a contradictory and convoluted enjoyment, an explosive mixture of drives and fantasies that eludes existing portraits of our era. The current political moment turns out to be not so much exceptional as exceptionally revealing of the constitutive tension between enjoyment and economy that has always been a key component of the social order. Santner analyzes the collective dream-work that sustains a new sort of authoritarian charisma or mana, a mana-facturing process that keeps us riveted to an excessively carnal incorporation of sovereignty. Mazzarella examines the contemporary merger of consumer brand and political brand and the cross-contamination of politics and economics, warning against all too easy laments about the corruption of politics by marketing. Schuster, focusing on the extreme theatricality and self-satirical comedy of the present, shows how authority reasserts itself at the very moment of distrust and disillusionment in the system, profiting off its supposed decline. A dazzling diagnostic of our present, Sovereignty, Inc., forces us to come to terms with our complicity in Trump’s political presence and will immediately take its place in discussions of contemporary politics.

Elisabeth Bronfen is Professor of English and American Studies at the University of Zurich and, since 2007, Global Distinguished Professor at New York University. She completed her habilitation at the University of Munich on representations of femininty and death. Her areas of specialization include gender studies, psychoanalysis, visual culture, and television seriality. She published "Obsession. The Cultural Critic’s Life in the Kitchen” with Rutgers Unversity Press. Her book "Serial Shakespeare. An Infinite Variety of Apropriations in American TV drama" will be published in October with Manchester University Press.

William Mazzarella is the Neukom Family Professor of Anthropology at the University of Chicago. He is the author of Shoveling Smoke: Advertising and Globalization in Contemporary India (2003), Censorium: Cinema and the Open Edge of Mass Publicity (2013), and the Mana of Mass Society (2017).

Aaron Schuster is a philosopher and writer who lives in Amsterdam. He is a senior research adviser at the VAC Foundation (Moscow), and was previously a fellow at the Society for the Humanities, Cornell University, and a visiting professor at the University of Chicago. He is the author of The Trouble with Pleasure: Deleuze and Psychoanalysis (MIT Press, 2016). Next year he has two forthcoming books: How to Research Like a Dog: Kafka's New Science (MIT Press), and Spasm: Theater and the Philosophy of Tickling (Cabinet Books).

Eric L. Santner is the Philip and Ida Romberg Distinguished Service Professor in Modern Germanic Studies at the University of Chicago. He joined the Chicago department in autumn 1996 after twelve years of teaching at Princeton University. His book publications are: Friedrich Hölderlin. Narrative Vigilance and the Poetic Imagination; Stranded Objects. Mourning, Memory, and Film in Postwar Germany; My Own Private Germany. Daniel Paul Schreber's Secret History of Modernity; On the Psychotheology of Everyday Life: Reflections on Freud and Rosenzweig; The Neighbor: Three Inquiries in Political Theology (written with Slavoj Zizek and Kenneth Reinhard); On Creaturely Life: Rilke, Benjamin, Sebald; The Royal Remains: The People’s Two Bodies and the Endgames of Sovereignty; The Weight of All Flesh: On the Subject-Matter of Political Economy; Sovereignty Inc.: Three Inquiries in Politics and Enjoyment (with William Mazzarella and Aaron Schuster). Santner also edited the Hölderlin volume for the German Library Series at Continuum Press and co-edited a major volume of essays on the Holocaust with Moishe Postone, Catastrophe and Meaning: The Holocaust and the Twentieth Century. Several of his books have been translated into other languages (German, Hebrew, Portuguese, Spanish, Korean, Italian, Chinese). Eric Santner continues to work at multiple intersections of literary and cultural studies, philosophy, psychoanalytic thought, religious studies, and political theory.

"Sovereignty, Inc.: Three Inquiries in Politics and Enjoyment" is funded by the DAAD from funds of the German Federal Foreign Office (AA).