Deutsches Haus at NYU and STILL Magazine present “’Herr Gröttrup setzt sich hin,’ and other stories: A Conversation with Sharon Dodua Otoo” with Sharon Dodua Otoo, Tina Campt (moderator), and the translators Katy Derbyshire, and Patrick Ploschnitzki. The conversation will focus on Dodua Otoo’s award-winning short story "Herr Gröttrup setzt sich hin," the translation process into British- and American English, and the question of representation and diversity in the German literary landscape. 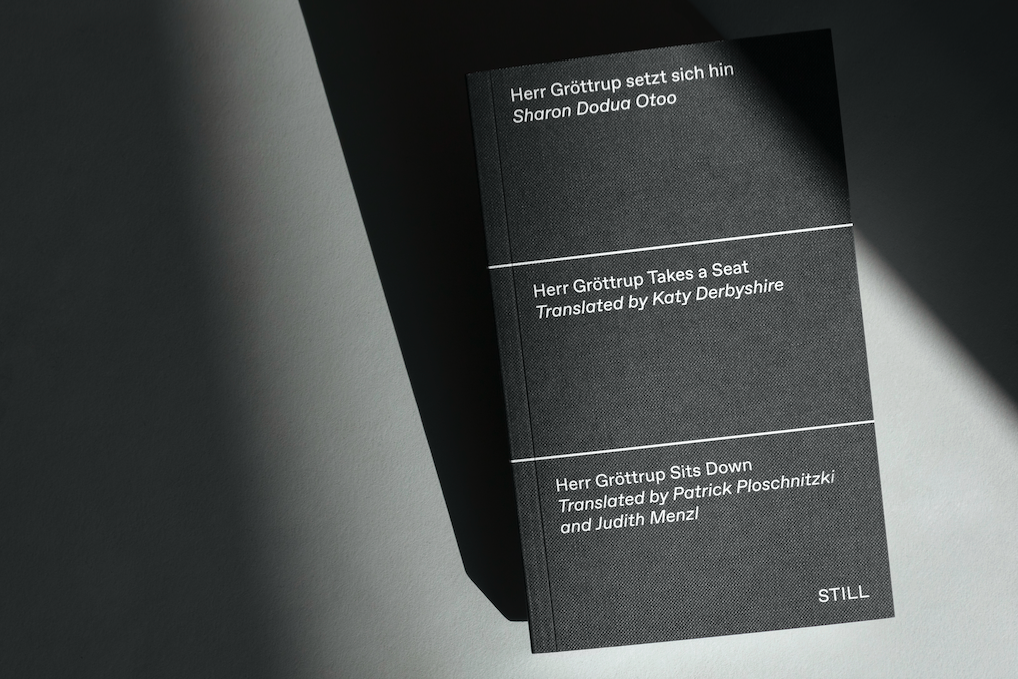 Sharon Dodua Otoo’s award winning short story "Herr Gröttrup setzt sich hin," her second work published in German, is a subversive fable on rules and rule-breaking set in the unlikeliest of places: the breakfast table of Herr and Frau Gröttrup. The arrival of an unexpected guest forces Herr Gröttrup to question the routines around which he has so obsessively organized his world — and his unmooring is a reminder of the fragility of our systems. Otoo, a Black British author and the first ever Black writer to win the Ingeborg Bachmann Prize, conjures up a forgotten chapter of German history in her portrayal of Herr Gröttrup, who is based on Nazi rocket-scientist Helmut Gröttrup. "Herr Gröttrup setzt sich hin" whimsically reckons with Germanness and "otherness" — and examines our internalization of rules and the extraordinary lengths we’d go to protect them.

"Herr Gröttrup setzt sich hin" is now available to English readers. This limited-edition tripartite publication visually presents the original German text in paralleled symmetry with translations from the British and American English and original illustrations inspired by the absurdist world of Herr Gröttrup. Featuring an interview between the author and celebrated novelist Idra Novey, Herr Gröttrup setzt sich hin is a stunning meditation on rules and rule-breaking.

Tina Campt is Owen F. Walker Professor of Humanities and Modern Culture and Media at Brown University and a Research Associate at the Visual Identities in Art and Design Research Centre (VIAD) at the University of Johannesburg, South Africa. Campt is a black feminist theorist of visual culture and contemporary art, and one of the founding researchers in Black European Studies. She is the author of three books: Other Germans: Black Germans and the Politics of Race, Gender and Memory in the Third Reich (2004), Image Matters: Archive, Photography and the African Diaspora in Europe (2012), and Listening to Images (2017). Her forthcoming book, A Black Gaze, will be published by MIT Press in 2021.

Katy Derbyshire translates contemporary German writers including Heike Geissler, Olga Grjasnowa, and Clemens Meyer. She co-hosts a monthly translation lab in Berlin and the bi-monthly live Dead Ladies Show, which has its own podcast. Katy is now publisher at V&Q Books, exporting “remarkable writing from Germany” to the UK and Ireland.

Sharon Dodua Otoo is an author and a political activist. She writes prose and essays and is editor of the English-language book series "Witnessed" (edition assemblage). In 2017 her first novellas "the things i am thinking while smiling politely" and "Synchronicity" were published in German translation by S. Fischer Verlag. Otoo won the Ingeborg Bachmann Prize in 2016 with the text "Herr Gröttrup setzt sich hin". In 2020 her inaugural speech at the Festival of German Language Literature "Dürfen Schwarze Blumen Malen?" was published by Verlag Heyn. Her first novel in German will appear in 2021 and will be published by S. Fischer Verlag. Otoo is politically active with the Initiative Schwarze Menschen in Deutschland e.V. and Phoenix e.V. She lives with her family in Berlin.

Patrick Ploschnitzki is a Ph.D. candidate in Transcultural German Studies with a minor in Translation Studies at the University of Arizona in Tucson. Among his literary translation publications are Jürgen Bauer's Das Fenster zur Welt in Translation Review and selected poetry and short stories by Zafer Şenocak. He’s currently working on a translation into German of Aaron Cometbus’s Post-Mortem, a journalistic investigation of what’s left of the 1990s California punk scene. Patrick's dissertation  research investigates amateur online commentary on US-American television dubbed into German. Other research interests include the use of online translation tools in the foreign language classroom as well as redefined Heimat imagery in contemporary punk and rap lyrics.

"'Herr Gröttrup setzt sich hin' and other stories: A Conversation with Sharon Dodua Otoo" is funded by the DAAD from funds of the German Federal Foreign Office (AA).