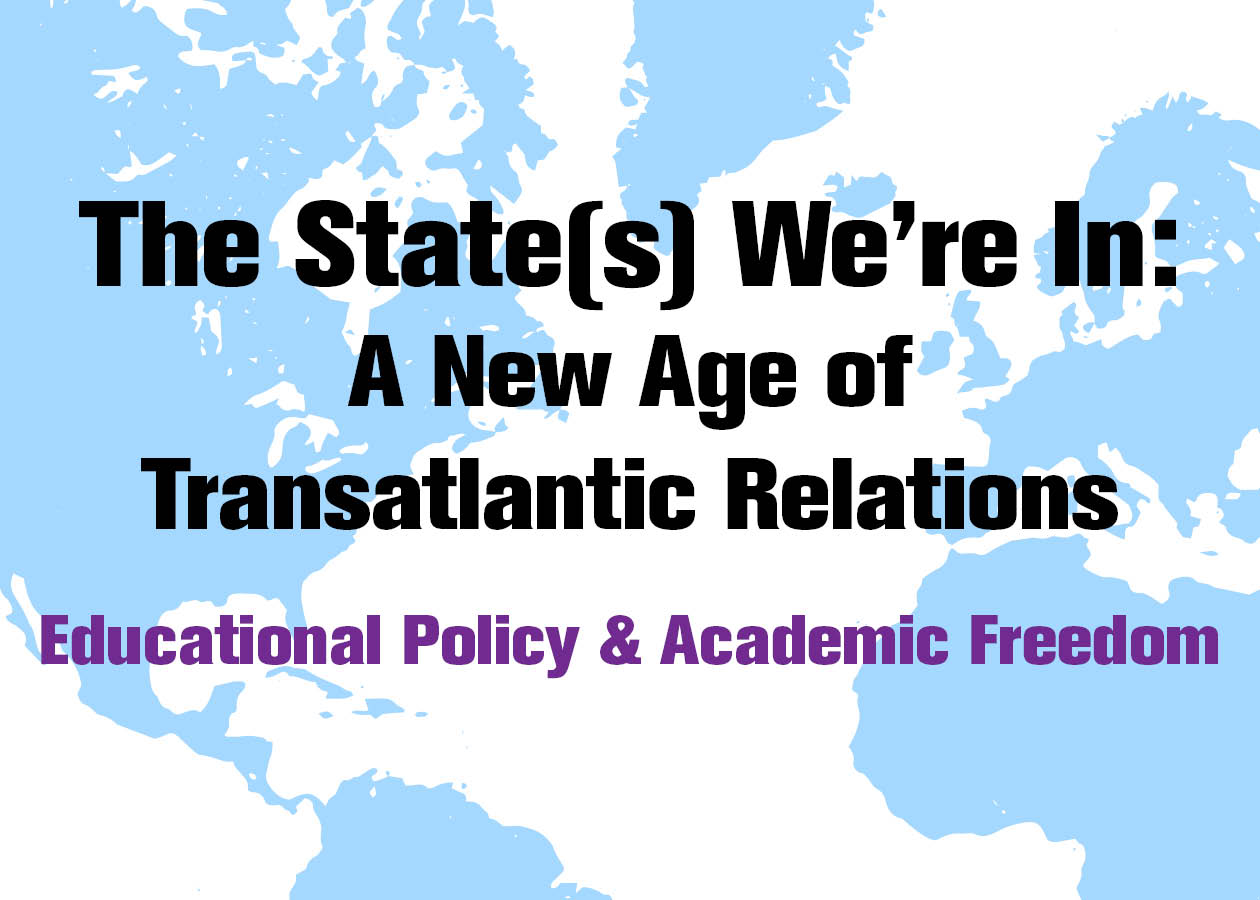 Deutsches Haus at NYU presents a moderated panel discussion on "Educational Policy and Academic Freedom" among Dr. Moaath Alrajab, Assistant Professor in the Department of Computer Systems at the State University of New York Farmingdale and an alumnus of the Scholar Rescue Fund of the Institute of International Education; Dr. Mariët Westermann, Executive Vice President of the Andrew W. Mellon Foundation; Dr. George Rupp, Distinguished Visiting Scholar at Columbia's Institute for Religion, Culture, and Public Affairs, and former President of Columbia University; and Dr. Steven Sokol, President of the American Council on Germany.

"The State(s) We're In: A New Age of Transatlantic Relations – Educational Policy and Academic Freedom" will coincide with Deutsches Haus at NYU's annual ceremony celebrating the 2018 Volkmar and Margret Sander Prize, which will be awarded to the German American academic, psychiatrist, entrepreneur, and philanthropist, Dr. Henry Jarecki, for his extraordinary contributions to scholar rescue and providing sanctuary for endangered scholars.

Around the world, scholars have long been persecuted, detained, tortured, and harassed. In this panel we will examine why academic freedom matters to everyone (not just academics), why it is an essential element of functioning democracies worldwide, and why it is crucial to protect the voices and ideas of scholars from around the globe.

Moaath Alrajab is an academic who works at the State University of New York Farmingdale in the Computer Systems Department. Dr. Alrajab is an alumnus of the Scholar Rescue Fund (SRF) of the Institute or International Education (IIE). He arrived in the USA after fleeing the Syrian conflict in Aug/2013. During his IIE Scholar Rescue Fund fellowship, Dr. Alrajab was a visiting scholar at the University in Exile of The New School University. His research areas focus on machine vision, image processing, and mobile computing. He has published many peer-reviewed articles. He earned a B.Eng. from Albaath University - Syria, an M.Sc. in mobile computing from Bradford University - UK, and a Ph.D. in AI and machine vision from the University of Leeds - UK. Dr. Alrajab is a vocal advocate for Academic Freedom.

George Rupp is a distinguished visiting scholar at Columbia’s Institute for Religion, Culture, and Public Affairs and an adjunct professor of religion, public health, and international affairs. Dr. Rupp served as President of the International Rescue Committee from 2002 to 2013.  As the IRC’s Chief Executive Officer, Dr. Rupp led a staff of more than 12,000 colleagues and oversaw the agency’s relief and development operations in over 40 countries and its refugee resettlement and assistance programs in 22 cities in the United States. During his tenure, the budget of the IRC tripled (to over $450 million). The IRC also closed out a $60 million capital campaign at $110 million. Along with the growth of programs in service delivery, advocacy efforts were increased in Washington and New York and also in London, Brussels, Geneva, Nairobi, and Bangkok. Before joining the IRC, Dr. Rupp served as president of Columbia University. During his nine-year tenure, he focused on enhancing undergraduate education, on strengthening campus ties to surrounding communities and New York City as a whole, and on increasing the university’s international orientation. Earlier, Dr. Rupp served as president of Rice University and before that was the John Lord O’Brian Professor of Divinity and dean of the Harvard Divinity School. Educated in Germany and Sri Lanka as well as the United States, he is the author of numerous articles and six books, including Beyond Individualism: The Challenge of Inclusive Communities (2015).

Steven E. Sokol holds a Doctorate in Law and Policy from Northeastern University as well as an M.A. in International Relations and International Economics from the Johns Hopkins University’s Paul Nitze School of Advanced International Studies (SAIS) and a B.A. from Wesleyan University. He has also studied at Heidelberg University and as a Fulbright Scholar at the Freie Universität in Berlin. Dr. Sokol has been President of the American Council on Germany (ACG) since May 2015. Before that he served as President and CEO of the World Affairs Council of Pittsburgh and prior to that he was the Vice President and Director of Programs at the ACG. Dr. Sokol has more than 20 years of experience working with nonprofit organizations in Europe and the United States – and has spent over a decade working at nonpartisan membership-based organizations focusing on a range of domestic and foreign policy issues.

Mariët Westermann is the executive vice president of the Andrew W. Mellon Foundation, directs the Foundation's grantmaking programs and works closely with the president and her fellow officers on strategic directions and initiatives. Prior to taking up her position in 2010, Ms. Westermann was the first provost and chief academic officer of New York University Abu Dhabi, charged with directing the development of the new campus and overseeing the design of the academic program and recruitment of the faculty.  At NYU, she had previously served as director and Paulette Goddard professor at the Institute of Fine Arts. Earlier in her career, Ms. Westermann held positions as associate director of research at the Clark Art Institute and as assistant and associate professor at Rutgers University. A historian of Netherlandish art, Ms. Westermann is the author of A Worldly Art: The Dutch Republic 1585-1718 (Harry Abrams, 1996), The Amusements of Jan Steen: Comic Painting in the 17th Century (Waanders, 1997), Rembrandt (Art and Ideas, Phaidon, 2000), and numerous articles and reviews.  She edited Anthropologies of Art (Sterling and Francine Clark Art Institite, 2005) and four volumes of the Netherlands Yearbook for History of Art. Her collaborations with museums include her Rijksmuseum Dossier: Johannes Vermeer (Waanders, 2004) and curatorship of the exhibition Art and Home: Dutch Interiors in the Age of Rembrandt (Denver Art Museum and Newark Museum, 2001). Ms. Westermann's current interests concern Dutch art in the global 17th century, and the Garden of Eden in the imagination of Judaism, Christianity, and Islam.  Ms. Westermann earned her BA at Williams College and her MA and PhD at NYU's Institute of Fine Arts.  She has received fellowships and grants from the American Philosophical Society, Center for Advanced Study in the Visual Arts, Clark Art Institute, and National Endowment for the Humanities.  Ms. Westermann serves on the boards of The Little Red School House, MASS MoCA, the International Alliance for the Protection of Cultural Heritage in Conflict Zones, and the Institute of International Education.

"The State(s) We're In: A New Age of Transatlantic Relations. Educational Policy and Academic Freedom" is supported by the Transatlantic Program of the Federal Republic of Germany with funds from the European Recovery Program (ERP) of the Federal Ministry for Economy and Energy (BMWi).