The Extreme Gone Mainstream?: Commercialization and Far Right Youth Culture in Germany and the U.S. 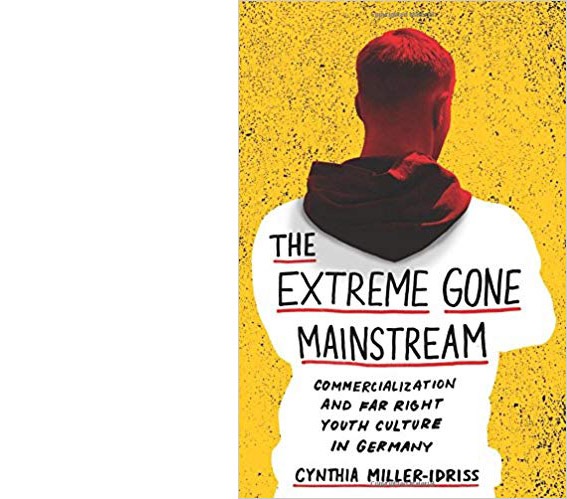 Deutsches Haus at NYU and the University of Cologne New York Office present a talk by Cynthia Miller-Idriss, Professor of Education and Sociology at the American University in Washington, DC, and former fellow of the Morphomata International Center for Advanced Studies at the University of Cologne, about her recent book The Extreme Gone Mainstream: Commercialization and Far Right Youth Culture in Germany (Princeton University Press, 2018). Welcoming remarks will be delivered by Consul Heiko Schwarz, Head of the Political Department of the Consulate General of the Federal Republic of Germany in New York. The talk will be followed by a conversation between Cynthia Miller-Idriss and Hanjo Berressem, Professor of American Literature and Culture at the University of Cologne, and DAAD Visiting Scholar at Deutsches Haus at NYU in September and October.

The past decade has witnessed a steady increase in far right politics, social movements, and extremist violence in Europe. Scholars and policymakers have struggled to understand the causes and dynamics that have made the far right so appealing to so many people—in other words, that have made the extreme more mainstream. In this book, Cynthia Miller-Idriss examines how extremist ideologies have entered mainstream German culture through commercialized products and clothing laced with extremist, anti-Semitic, racist, and nationalist coded symbols and references.

Drawing on a unique digital archive of thousands of historical and contemporary images, as well as scores of interviews with young people and their teachers in two German vocational schools with histories of extremist youth presence, Miller-Idriss shows how this commercialization is part of a radical transformation happening today in German far right youth subculture. She describes how these young people have gravitated away from the singular, hard-edged skinhead style in favor of sophisticated and fashionable commercial brands that deploy coded extremist symbols. Virtually indistinguishable in style from other popular clothing, the new brands desensitize far right consumers to extremist ideas and dehumanize victims.

Required reading for anyone concerned about the global resurgence of the far right, The Extreme Gone Mainstream reveals how style and aesthetic representation serve as one gateway into extremist scenes and subcultures by helping to strengthen racist and nationalist identification and by acting as conduits of resistance to mainstream society.

Cynthia Miller-Idriss is Professor of Education and Sociology at the American University in Washington, DC, and Senior Fellow at the Centre for Analysis of the Radical Right (CARR). Her primary research focuses on the cultural dimensions of radical and extreme right youth subcultures and school-based responses to radical and extreme youth engagement. Her most recent book is The Extreme Gone Mainstream: Commercialization and Far Right Youth Culture in Germany. Miller-Idriss writes frequently for mainstream audiences on issues of youth radicalization, nationalism, education, and parenting, most recently for The New York Times, The Washington Post, Salon, and Fortune. In 2013-2014, she worked on The Extreme Gone Mainstream as part of her fellowship at the Morphomata International Center for Advanced Studies at the University of Cologne.

Hanjo Berressem studied English Literature and Art History at the University of Aachen. During his studies, he received DAAD scholarships to spend a year at the University of Michigan and a year at Brown University. After finishing his Ph. D. thesis on the work of Thomas Pynchon in 1989, he began work on his Habilitation, which was funded by a DFG research grant. In 1994, he spent a year at the University of Berkeley. After finishing his Habilitation in 1996, he taught American Literature and Culture at the Universities of Bielefeld (1996–1998), Hannover (1998–2000), and Cologne, where he is currently teaching. In 2002, he was ‘Visiting Scholar’ at the University of California (UCLA). He is Speaker of the Zentrum für Medienwissenschaften and a member of the a.r.t.e.s. Graduate School at the University of Cologne. His academic interests include contemporary American fiction (in particular the work of Thomas Pynchon, William Gibson, and Bret Easton Ellis), Media Studies, as well as the work of Michel Serres and Gilles Deleuze. He has recently finished two ‘complementary’ book manuscripts, one on Gilles Deleuze (Crystal Philosophy), the other on the notion of ‘Eigenvalue’ (Crystal Science). Professor Berressem will be a DAAD Visiting Scholar at Deutsches Haus at NYU in September and October.

About the University of Cologne

The University of Cologne was founded in 1388. It is one of the leading German research universities, offering an exceptionally diverse subject base. Key Profile Areas conduct internationally competitive research on highly topical scientific, technological and social issues, such as aging-associated diseases, behavioral economic engineering and social cognition, plant science, quantum matter and materials, and socio-economic, cultural and political transformations in the Global South. The University of Cologne is one of the 11 German Universities of Excellence. The University of Cologne’s New York Office cultivates relations with North American partner universities, organizes delegation visits, and serves as first point of contact for faculty, students, and other partners in the United States and Canada. It co-organizes the annual UoC summer school in New York, reaches out to German and international alumni, and offers researchers from the UoC platforms opportunities to network, present their scientific results, and initiate new collaborations in North America.

"The Extreme Gone Mainstream?: Commercialization and Far Right Youth Culture in Germany and the U.S." is a DAAD-supported event. Additional support provided by the Consulate General of Germany in New York.