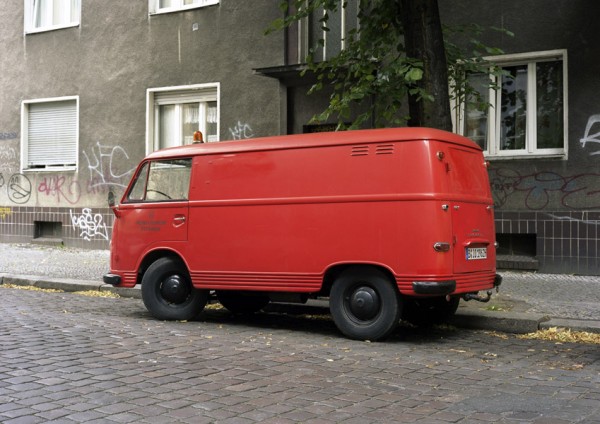 About the artist books:

"Neuköln 'Heroes'” is a photographic dialogue between Hannah Darabi (Iran) and Benoît Grimbert (France). Both photographers find that ordinary urban scenes are worth photographing. By making these images, they do not claim to tell specific stories. Although by adding other elements like selected texts or found printed matter, they provide echoes to reflect their photographies. The images for this book were created during three journeys to Berlin in August 2011, September 2012, and August 2013. And finally, the edition was put together and produced by Thorsten Baensch in fall 2013.

In the mid-seventies, David Bowie, tired of the tumultuous life of Los Angeles, is discovering Berlin – as a destination where he could be anonymous. The books of Christopher Isherwood, especially Mr Norris Changes Trains, which describe the decadent Berlin of the 1930s, is inspiring for him. In 1977, the album "Heroes", made entirely in Berlin, is released. One of the instrumental pieces of the B-side, Neuköln [sic], represents strongly a sense of hardness and sadness that Bowie felt in the city. He observed and described his popular Kiez or neighbourhood, as he later said, "where the Turks are shackled in bad conditions."

Thirty-five years later, Darabi and Grimbert photographed this area to provide contemporary counterpoint to the Neukölln of "Heroes." Their photographs evoke both the present time and the time that has gone by or even stands still. The publication is primarily a "cataract of times" that confronts the reader with quotations from Siegfried Kracauer’s Die Angestellten or Franz Hessel’s Spazieren in Berlin or even film stills from Menschen am Sonntag (Robert Siodmak, Billy Wilder), and it echoes Isherwood’s Berlin of the early 1930s. Neuköln "Heroes" can be conceived as a journey through time, in which David Bowie is the main driver. The book was first presented at Librairie Mazarine in Paris on November 14, 2013.

Nuclear Winter is a book project about Nico, a nomadic and unclassifiable singer who spent the last years of her life in the city of Manchester. Based on her personal diary, the autobiography of her son Ari, and other biographical writings and information, the edition explores the different areas where she lived and worked. Texts and documents enter a dialogue with the photographs in a very unusual artist’s book published and produced by Thorsten Baensch for Bartleby & Co. in an edition of 10 copies in 2018. The book was first presented at Librairie Mazarine in Paris on April 10, 2018, together with a collection of 49 original objects related to Nico, her life and her music.

Bartleby & Co. is an artist project founded in 1995 by Thorsten Baensch. Bartleby is celebrating the art of copying and collaboration and was created to give to every published project beauty, care, originality, respect, spirit, love and nonetheless uniqueness through very close discussions with the various co-workers. Bartleby & Co. works with artists, artisans, authors, poets, scientists, thinkers, translators and other experts of all kinds. Bartleby & Co.’s editions are both: playful and serious; complex and simple; poetic and cryptic; convivial and hermetic, often multilingual and mostly combining innovative materials with mixed printing and binding techniques. Inspired by Herman Melville’s character the scrivener Bartleby who works as a copyist and who repeatedly says I would prefer not to, Thorsten Baensch’s editions are an homage to that profoundly human need for resistance and they are an artists’ statement to the absurdity of our existence. Ah Bartleby, ah humanity.