The Telos-Paul Institute, in collaboration with Deutsches Haus at NYU, presents "After the Welfare State: Reconceiving Mutual Aid"

Deutsches Haus at NYU and the Telos-Paul Piccone Institute will jointly present the conference "After the Welfare State: Reconceiving Mutual Aid" to be held at Deutsches Haus at NYU, from February 15-16. Catherine Malabou and Reverend Eugene F. Rivers III will deliver the keynote speeches. For a detailed conference schedule, please click here. 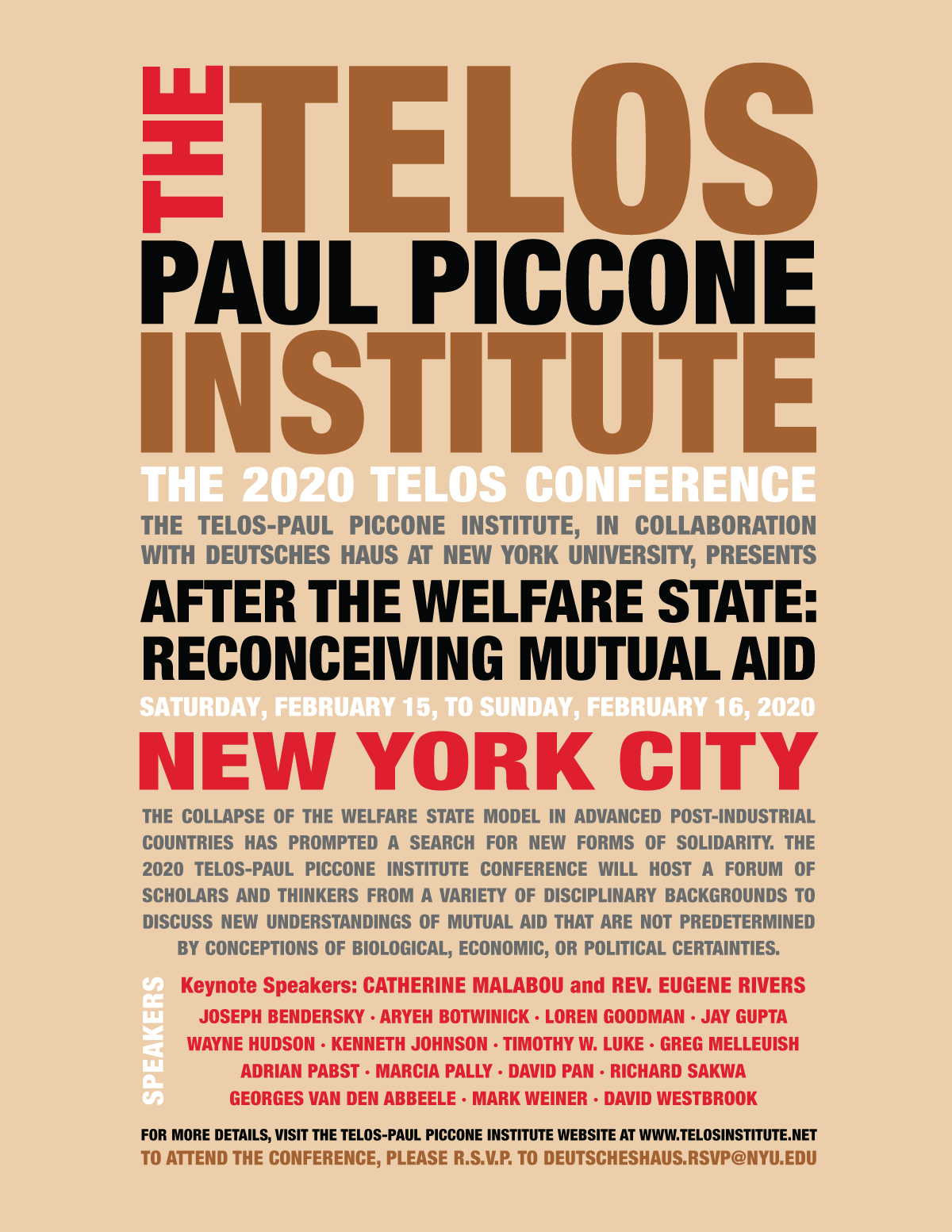 Although the rise of populism has often been interpreted as the atavistic return of racism and nationalism, the underlying sources have more to do with the collapse of the welfare state model in advanced post-industrial countries, which has resulted in the search for new forms of solidarity that could replace welfare state structures. These structures were first developed in the early twentieth century when a new type of nation-state and industrial economy came into being along with the developing capitalist regime of accumulation. Such a regime brought about the destruction of the existing networks of solidarity—based primarily on family, religious community, and workplace ties—thereby leading the state to intervene in different social services, including health, employment, and senior care, as well as in labor policy regarding such issues as the minimum wage, the length of the working day, retirement, and accident insurance. However, these interventions by the state, whether they responded to labor union protests or arose from anti-socialist preemptive actions by conservative forces, have been accompanied by the growing bureaucratization of its practices, which have come to constitute, along with capitalist commodification, one of today's fundamental sources of inequalities and conflicts.

The feeling that governments are incapable of dealing with social problems has regenerated the awareness that collective self-management is perhaps inevitable, at both micro- and macroscopic levels: from neighborhood collectives up to lending circles, non-profit societies, religious organizations, and solidarity economies. The contemporary interest in structures of mutual aid relates to the fact that we are living in an era that is clearly looking for new models of human flourishing and social development. Not only must we deal with multiple and recurring crises (finance, food, energy, and environment), but there is a growing recognition that today's normative agenda has to be much more encompassing and holistic, including issues of gender equality, fair trade, environment, and cultural and religious diversity.

A need to reconceptualize the concepts of the "common good" and "collective interest" is developing out of this set of conditions, leading to new definitions of civic sense, responsibility, and autonomy. The need for intermediary structures between the private and public sphere frames the space of intervention for mutual aid as a new form of social coherence.

But the concept of mutual aid has a complex and contradictory history. According to Peter Kropotkin, there is an innate biological evolutionary tendency toward mutualism in all living beings, an immanent social rationality that orients humanity toward a self-regulated political organization and society. Against social Darwinism, Kropotkin argues that species not only compete but also, and mainly, collaborate. Such an evolutionary vision later formed the core of Edward Wilson's sociobiology, marking the beginning of the altruism/selfishness debates within which the problematic of mutual help has remained enclosed for decades. Libertarianism, for example, presupposes that individuals' social behavior is grounded in a natural principle of selfishness that should then become the basis of aid. This vision allows for a deterministic idea of the capitalist economy in which Robert Nozick argues for the principle of a "minimal state" grounded on the fact that no distributive justice can come from above. Similarly, Friedrich Hayek argues that the "true" nature of liberalism lies in the doctrine that seeks to reduce to the minimum the power of the state. Democracy is then only the means for collective decision-making or a utilitarian apparatus for safeguarding internal peace and individual freedom. The capitalist free market, in turn, is said to be the only type of social organization that respects the principle of individual liberty.

This conference seeks to develop new concepts of mutual aid that are not predetermined by conceptions of biological, economic, or political certainties.

Please note: Sessions taking place at Deutsches Haus at NYU will be open to the general public. Attendance for break-out sessions will be limited to conference participants who have registered with the Telos-Paul Piccone Institute only. Events at Deutsches Haus are free and open to the public. If you would like to attend this event, please send an email to deutscheshaus.rsvp@nyu.edu. As space at Deutsches Haus is limited, please arrive ten minutes prior to the event to ensure you get a good seat. Thank you!