Lifeworld – The Sociology of Alfred Schutz

Deutsches Haus at NYU presents a screening of Hermílio Santos' documentary "Lifeworld – The Sociology of Alfred Schutz" about the life and work of the Austrian sociologist and phenomenologist. Following the screening, Hermílio Santos will engage in a conversation about topics explored in the film.

Image depicting the poster for "Lifeworld: The Sociology of Alfred Schutz" 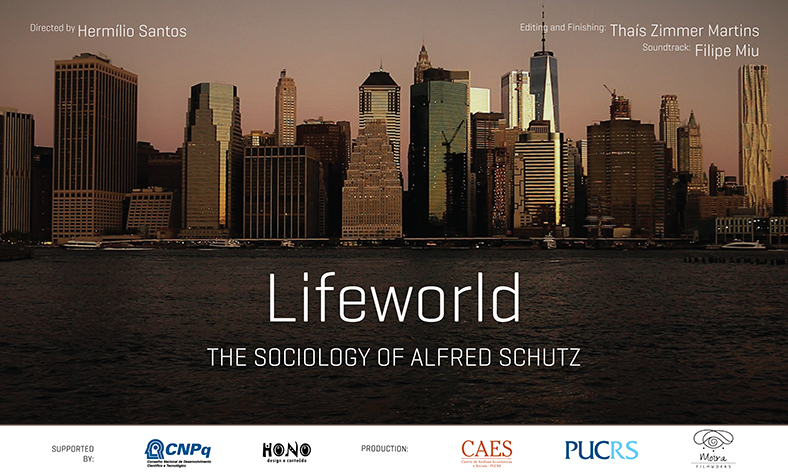 Lifeworld – The Sociology of Alfred Schutz; A Documentary Film by Hermílio Santos (56’, 2018)

The documentary film “Lifeworld – The Sociology of Alfred Schutz” (directed by Hermílio Santos, 56’, 2018) presents different aspects of the work of Alfred Schutz, divided in four parts: in the first one it presents some aspects of his biography; in the second part the interviewees explain the main theoretical influences on his work; the third part is dedicated to present the main concepts of his sociological theory, “lifeworld” and “relevance”, and in the last part of the film sociologists present examples on how the Alfred Schutz’ sociology have been used currently in theoretical and empirical researches. Among the interviewees are Michael Barber (USA), Hisashi Nasu (Japan), Ilia Srubar, Martin Endress, Jochen Dreher and Joachim Renn (Germany), Thomas Eberle (Switzerland) and others from Argentina, Brazil, France and Italy. The interviews were conducted in English, German, Spanish, Japanese, Italian, French and Portuguese and will be screened with English subtitles. The interviews and scenes were shot in Buenos Aires, Vienna, Tokyo, Porto Alegre and New York. After the screening the director will discuss with the audience topics explored in the film and some aspects involved in sociological filming.

Hermílio Santos is a sociologist. He received his PhD. in Political Science from the Free University of Berlin. Professor of Sociology at PUCRS, Porto Alegre, Brazil, president of the Research Committee “Biography and Society” of the International Sociological Association – ISA. Prof. Santos connects his research activities with film-making as a way to present results, the context of empirical research fields, theories and methods. Santos directed Surveilled Intimacy (12’, 2010), on the routine of adolescents that committed criminal injuries, and co-directed the documentary Infância Falada – Histories of Transformation Based on Dialogue (52’, 2016, directed by Hermílio Santos and Kamila Almeida). The movie presents positive experiences in urban violent scenarios in Brazil using different languages to foster and disseminate dialogue among and between children as an alternative to the violence they often experience.

"Lifeworld - The Sociology of Alfred Schutz: A Screening and Conversation with Hermílio Santos" is funded by the DAAD from funds of the German Federal Foreign Office (AA).