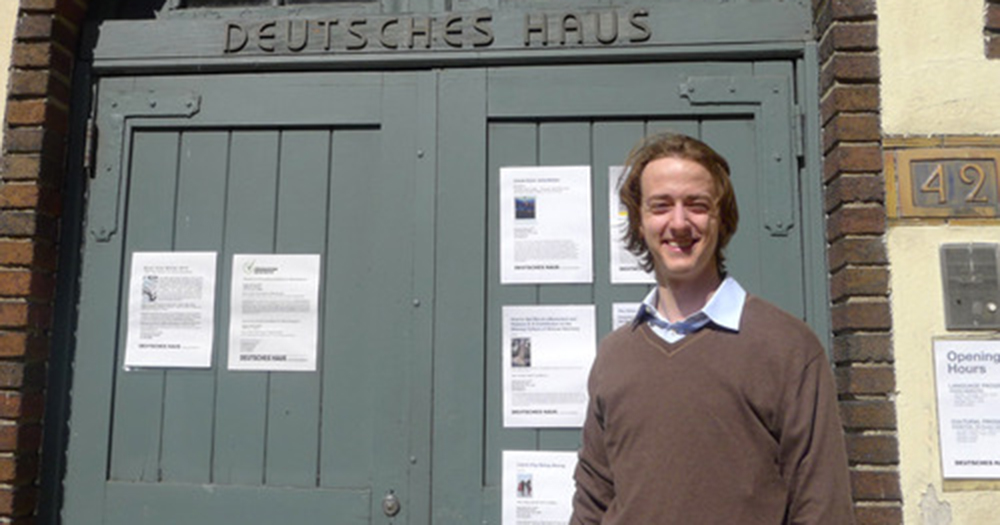 My name is Charles and I am in the final semester of my degree with the Draper Program in Humanities and Social Thought. My studies in the history and philosophy of science have provided me with a deep appreciation for the contributions of German scholars to both the humanities and the natural sciences.

My interest in learning German, however, began with the vague suspicion of German roots somewhere far back in my family tree. In high school, a European history teacher advised me that, should I wish to pursue the life of the mind, I would have to learn either French or German, if not both. After struggling through several semesters of introductory German in college, I had the opportunity to study for a semester at the Freie Universität in Berlin. Although my abilities to communicate were still limited, I developed the patience I would need to spend long hours next to my Langenscheidt Deutsch als Fremdsprache dictionary. Between classes and reading, I discovered a world of electronic music beyond my wildest sonic imagination.

While pursuing my masters’ degree back in the United States, I began to see German as an integral component of my scholarship. Improving my abilities with the language enhanced my projects in the history and philosophy of science, much in the way that running and weight training can improve overall athletic performance. In my attempt to pursue German more seriously, I connected with Deutsches Haus, first as an attendee of its wonderful cultural programs and later as a part-time worker. Working at Deutsches Haus has been an ideal job, in that it has put me in contact with a group of amazing, energetic, and talented native speakers of German. My responsibilities include a range of basic administrative tasks, like keeping track of class registrations and RSVPs, as well as some light manual labor involved in preparing the space for events. Yet even at its most routine, this work excites me, since every interaction with my coworkers and supervisors presents a chance to learn something genuinely new.

I could best convey my feelings about Deutsches Haus by relaying an anecdote about its director, Martin Rauchbauer. One day, I mentioned to him my interest in German radio programs as a way to improve my comprehension and vocabulary. He lit up, urging me to check out Austrian radio as well, especially FM4, a public broadcaster that offered young listeners a middle ground between the conservative classical music selection of the other public broadcasters and the kitschy billboard hits of the commercial stations. FM4’s slogan, he reflected, might actually be a fitting catchphrase for Deutsches Haus itself: “You’re at home, baby!” I heartily agreed.