Deutsches Haus at NYU presents, ZweiundVierzig (42), a monthly playlist that explores German music in a transatlantic dialogue with the trends occurring in the contemporary American music industry. What kind of music is popular in the German-speaking world compared to in the United States? What does the demographic of the performers/artists say about the political, social, and cultural shifts in the German-speaking countries compared to in the United States? What parallels can be drawn between these countries, and what kind of parallel terminology, slang, and themes have developed? What differences are immediately apparent? From urban music, to rap and trap; to rock, pop, and techno; to dancehall, reggae, and bossa nova, etc.; ZweiundVierzig has something for all preferences and is an incredible resource for any language learner or music lover.

Why 42?
ZweiundVierzig, a stylization of the German word for forty-two (42), is the address of Deutsches Haus at NYU (DH), as well as the answer to everything, according to some.

Why do you only update once monthly?
Deutsches Haus at NYU has a full program from cultural events to language classes, but a really small team. Depending on the amount of traction and follows these playlists receive, we'll try to update more frequently. For now, we'll take it slow.

I don't have Spotify! How can I listen?
We'll screenshot the playlist below with every update. That way you can use whatever other streaming service you have, YouTube, or Google to find ways to access the music!

Why not just add the Spotify widget?
NYU is working on making this possible for our interface. Please bear with our alternate display for the time being.

Welcome back everyone! We've endured ten months of a pandemic, frightening political uncertainty, an on-going climate crisis, and just about anything imaginable. Amidst all this, change is coming, not just because we're fighting for it in various ways, but because change always does come after a crisis. We have hopes that these changes will be positive and for the best. It's in this spirit, that we dedicate ZweiundVierzig's thirteenth edition, the first of 2021 and this Spring semster, to political and social commentary through the ages in Germany.

This edition starts off with a beloved poem-turned-song from Wolf Biermann, an East German dissenter, who himself endured arrest and wrote the poem for "Ermutigung" (or encourgament), knowing that better was to come. However, as we know, it has to get worse before it gets better, and to remind us to "Macht Kaputt was euch kaputt macht," is Ton Steine Scherben. Keep only what can serve you, not what harms you. Silly and Karat are two other East German bands that feature on this playlist, the former with a critique against the former state in "Halloween in Ost-Berlin," and the latter with a climate-conscious concern for the world. This was in the early 80's and we're still singing about the same thing! Case in point, the following track "POLYESTER," by German favorite, Die Ärzte, a whole song dedicated to how microplastic is eating our world up. From here, we switch things up to minority rights and identity with Advanced Chemistry's famed track "Fremd in eigenen Land," which documents what its like to be a person of color growing up in Germany, without ever being considered as "German." One of our events this past Fall, "Centering the Margins: Reimagining National Identity" dealt with this very topic, and we strongly encourage a viewing. Building up on Advanced Chemistry's topic, is OG Keemo, whose track "216" speaks explicitely about anti-black institutional racisim in the German police force. It doesn't end there though, "Tindermatch" by Antilopen Gang recognizes that the fringes of both political ends (the far-right and the far-left) have way more in common (due to their extremisms and tendancies for radical violence) than either group would ever dare to acknowledge. Not to continue plugging in our events, but we did host a pretty helpful talk about this as well titled "The Rise of the Far-Right: A Transatlantic Comparison." Back to the music, we have K.I.Z. feat. Henning May with "Hurra die Welt geht unter," a song that acts almost as a follow up or echoing of Ton Steine Scherben's addition to this playlist. Sammy Deluxe brings the doomsday theme on this playlist to an end with a track that shines light on what he (and many) believe(s) to be where the issues of the world all stem from, misogyny. "Muttersprache" conveniently also referring to the fact that he too is probably othered in Germany for not being white, this track highlights the mistreatment of women in the day to day context (with curse words and derogatory speech often targeting mothers). This kind of violence seeps into the subconscious, and what is meant to be cherished and admired is actually tarnished and violated. From this othering of the woman into an object, also stems the capacity to other those who do not look like you, those who do not talk like you, etc. If we acknowledge equality amongst gender (as well as the fact that it's a construct), we'd all lack the simplest foundation for developing negativity when encountering difference. To end things (because this is turning into an essay!) we have Juju. Yes, Juju, again. What can we say, we love her. Juju's track "Freisein" feat. Xavier Naidoo, tackles the other monster in the room, inhumane capitalism. Juju just wants to be free from all the media, the attention, free to do what she pleases with her time and energy, instead of keeping up appearances or caring what others think of her. Ultimatey, the indsutry is stripping her of her self, and she wonders if the ends justify the means? The answer is no.

Artists have been using music to spread messages of climate-consciousness, equality, and self-awareness for decades! Take some time to truly listen, and then to change so that you can do your part in making the message a reality.

A special thanks to our intern, Martin Kraus, who helped in the creation of this playlist. 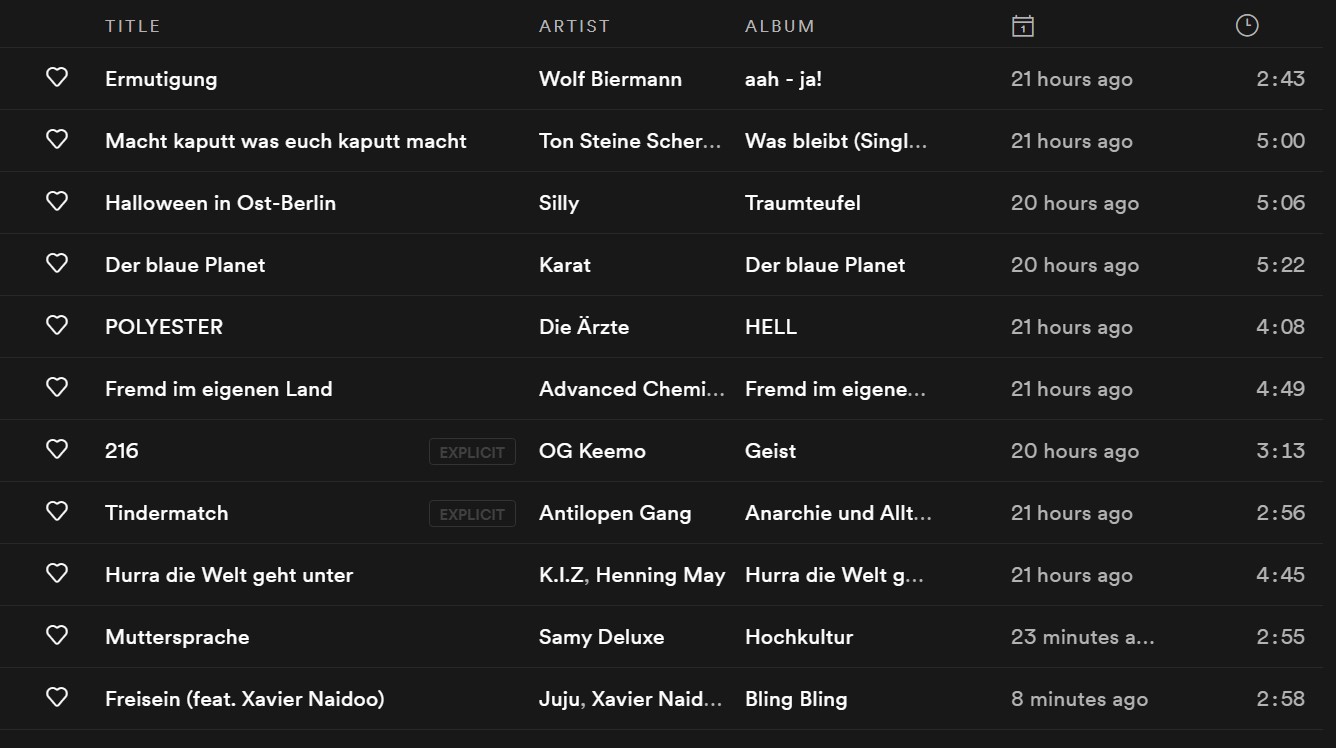