With two years of the ZweiundVierzig (42) initiative and twenty-two editions under our belt, it's time we continue to explore our Recommends segment. Instead of curated playlist organized through themes, ZweiundVierzig Recommends presents a select artist to highlight as a means to express more concretely the ways in which artists are shaping the German-speaking soundscapes.

ZweiundVierzig (42) is a monthly playlist that explores German music as it relates to the trends occurring in the contemporary American music industry. What kind of music is popular in the German-speaking world? What do the demographics of the performers/artists say about the political, social, and cultural shifts in the German-speaking countries? What parallels can be drawn between these countries, and what kind of parallel terminology, slang, and themes have developed? What differences are immediately apparent? From rap to trap; to rock, pop, and techno; to dancehall, reggae, and bossa nova, etc.; ZweiundVierzig is an incredible resource for any language learner or music lover.

Click here to check out this album on Spotify 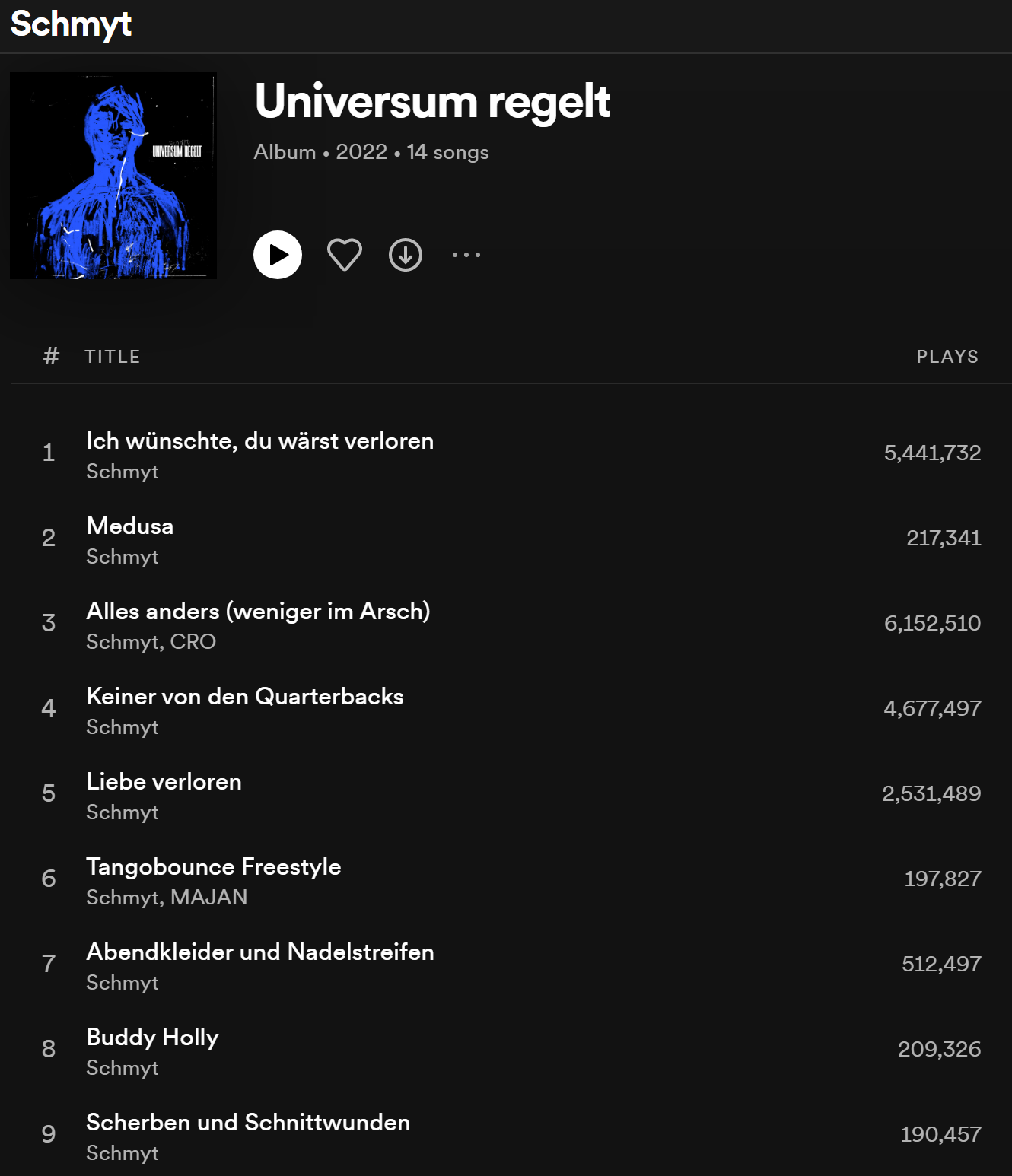 Featured before on our ZweiundVierzig playlists, Schmyt's voice is a diamond in the rough: coarse yet refined, stoic yet grief-stricken, haunting yet angelic, it's truly unmatched. His production, however, is not yet definable. Some terms such as "cloudrap," a subgenre of lo-fi rap often times designed with (dis/as)sociative lyrics devoid of content, have been thrown around to define his sound, but his lyrics don't necessarily fit the label. From an American perspective, we see a lineage here that harkens to Frank Ocean, Giveon, and other pioneers of haunting sounds inspired by nostalgia, heartache, and in some cases, even Americana. Some lyrics, and even whole songs, in Schmyt's repertoire, but namely "Jenny" from his 2021 EP Gift, and this album's "Buddy Holly," play on pop-culture icons in American (and [un]arguably global) media to create metaphors for his own (seemingly tumultuous) love life. Swoon. Others may label him along the lines of Drake, but Schmyt's snarled yet graceful voice sets him apart. Needless to say, we stan his sound.

Although Schmyt's solo career spans barely two years (since 2020), he's been in the German music scene since 2013 as part of the now defunct band Rakede. This explains his quick and masterful glow-up. With established connections, he was able to snag three prominent features for this debut album, Cro in "Alles anders (weniger im Arsch);" MAJAN in the eponymous track "Universum regelt," an amazing track about turning the other cheek (and letting karma/ the universe do the work for you instead); and another ZweiundVierzig favorite, OG Keemo, who recently released an album as well, in the last track "Macht kaputt." Of course, Schmyt has already been featured on the COLORS show performing a more intimate rendition of the opening track of the album, "Ich wünschte, du wärst verloren."

To ZweiundVierzig (42), this debut album is but a sincere flex. Schmyt's talented. He knows it, and Universum regelt is just the tip of the iceberg for an artists whose ambrosial voice can find space to impress in any genre or production. We can't wait to see how Schmyt grows. Must-listens on this project: every track, but we particularly love "Medusa," "Liebe verloren," "Buddy Holly," and "Universum regelt."