“Brothers! Arise! It is only by the defeat of the imperialist cultures that enslave us that it might become possible for the spirit of poetry to resurrect the forgotten world.”

Accompanying a show of the same name at Fortnight Institute, the Center for Experimental Humanities at NYU will be hosting an afternoon symposium that considers the legacy of poet/ eco-theorist/ free radical Allen Van Newkirk’s Guerilla: Free Newspaper of the Streets. Co-edited with poet and White Panthers’ co-founder John Sinclair, this tabloid-format ‘Monthly Newspaper of Contemporary Kulchur’ fused the energies of free jazz, experimental poetry and radical politics. Rooted in the local struggles of Detroit, it also sought to construct a more explicit bridge between revolutionary art and the liberation struggles fought by men and women in Vietnam, Latin America and black America.

Later Van Newkirk would move to New York where he forged a kinship with revolutionary artists Black Mask/ Up Against The Wall Motherfucker, staged a mock assassination of ‘bourgeois’ poet Kenneth Koch at St. Mark’s Church, and issued militant Guerilla broadsheets that accompanied their calls for armed resistance against state power with arrestingly beautiful poems by the likes of Diane Di Prima, LeRoi Jones, Charles Olson and Ed Dorn.

“THE SPIRIT OF THE PEOPLE WILL BE STRONGER THAN THE PIGS’ TECHNOLOGY” was uttered by Black and White Panthers as a kind of prediction in 1967? What can be said about its accuracy fifty years later? What is ‘the spirit’? Who are ‘the pigs’? Where are art and poetry and the imagination in this matrix of hunger? What does the marriage of poetry and left-wing militancy sound like in 2017? 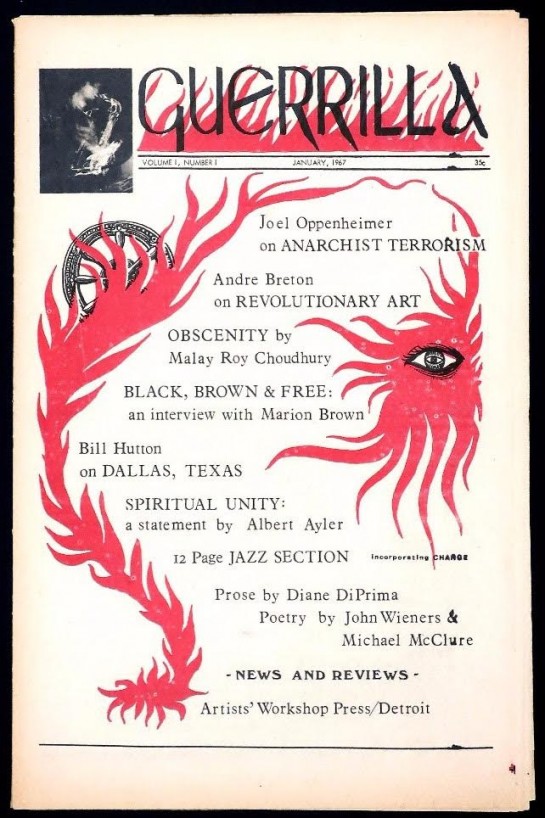