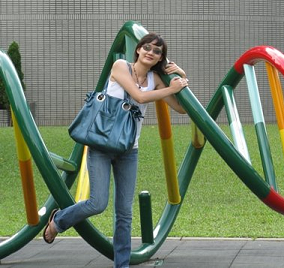 This dissertation explores language as a resource for the formation and expression of ethnic identity among the members of an Asian American college sorority. As a community of practice organized around ethnicity, the sorority provides an excellent site to examine the mutually constitutive relationship of language and ethnic identity. Two features of the sorority members’ speech are analyzed in detail: their pronunciation of the mid-back rounded GOAT vowel, and their prosodic rhythm. For both variables, the behavior of the sorority members is compared with that of college peers of both Asian and non-Asian descent. The results indicate that both segmental and suprasegmental features are available as markers of Asian American ethnicity, and that the association of linguistic features with ethnicity is mediated by group membership and region, among other factors.

The community of study is an Asian-interest sorority at a large public university in New Jersey. The data are drawn from two main sources: participant observation of sorority activities and one-on-one sociolinguistic interviews. The ethnographic observations allow the behaviors and beliefs of the sorority members to be situated in the local context of the school, the state, and the region. The interview data, meanwhile, provide high-quality spontaneous speech data for phonetic analysis. It is argued that it is only through an understanding of the particular social context in which speakers exist that their linguistic behavior can be understood; conversely, examining linguistic behavior can illuminate how identity categories such as “Asian American” are construed and enacted within a given social setting.

The segmental variable analyzed in this study is the realization of the mid-back rounded vowel in the GOAT class of words. A quantitative analysis shows that the sorority members produce a more backed and monophthongal GOAT vowel than their non-Asian peers. In previous work, the fronting of GOAT has been noted as an ongoing change in certain regional dialects in the United States; however, the present analysis shows that sorority members tend to produce backer GOAT vowels than non-Asian speakers regardless of region.

The suprasegmental variable analyzed is prosodic rhythm, which refers to the relative length of adjacent syllables in speech. English is typically described as a stress-timed language,with stressed syllables being much longer than unstressed syllables. However, the sorority members’ speech shows characteristics of syllable timing, with stressed and unstressed syllables being of roughly equal length. This finding coincides with those for other varieties of English, including Hispanic English and Singapore English. It is argued that syllable timing in English is likely a substrate effect from syllable-timed heritage languages, including Chinese, Vietnamese,and Korean. Individual differences in prosodic rhythm are also examined with respect to age of acquisition and other inter- and intraspeaker factors.

This dissertation draws on multiple research traditions in the study of language and identity: it is an ethnographic description of a community of practice as well as a sociophonetic study of regionally and ethnically linked variables. It is also a study of young women’s language at a critical stage of identity formation — the college years. Additionally, this dissertation is part of a growing body of sociolinguistic research on Asian Americans, a group that until recently has been drastically understudied. As a group with tremendous internal diversity, Asian Americans present both challenges and opportunities for the study of language and ethnicity. This dissertation thus advances sociolinguistic research in two ways: one, by shedding light on the language practices of this rapidly growing population, and two, by contributing to our overall understanding of how language interacts with various facets of identity, including ethnic identity.