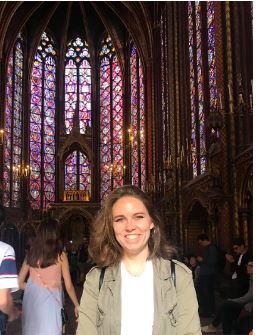 Sarah Schaefer is from Phoenixville, Pennsylvania. After discovering her love of the French language in secondary school, she went on to major in the subject at Bucknell University, along with Music, earning her B.A. in both in 2014. She served in AmeriCorps for one year following her graduation, an experience that inspired and motivated her to continue her studies. Sarah thus sought her Master’s in French Language and Literature at the University of Illinois at Chicago, which she obtained in 2018. For the past two years, she has been working as an English language teaching assistant in the departments of Ain and Rhône for the Académie de Lyon in France. She is very excited to have the opportunity to further explore and develop her interests at New York University starting this fall, the most fervent of which include poverty and gender studies in 19 th -Century literature. Guiding questions of endo/exo writership and the efficacy of genre are of particular interest to her.

M.A., The University of Illinois