Point of Entry II: The Curator as Translator 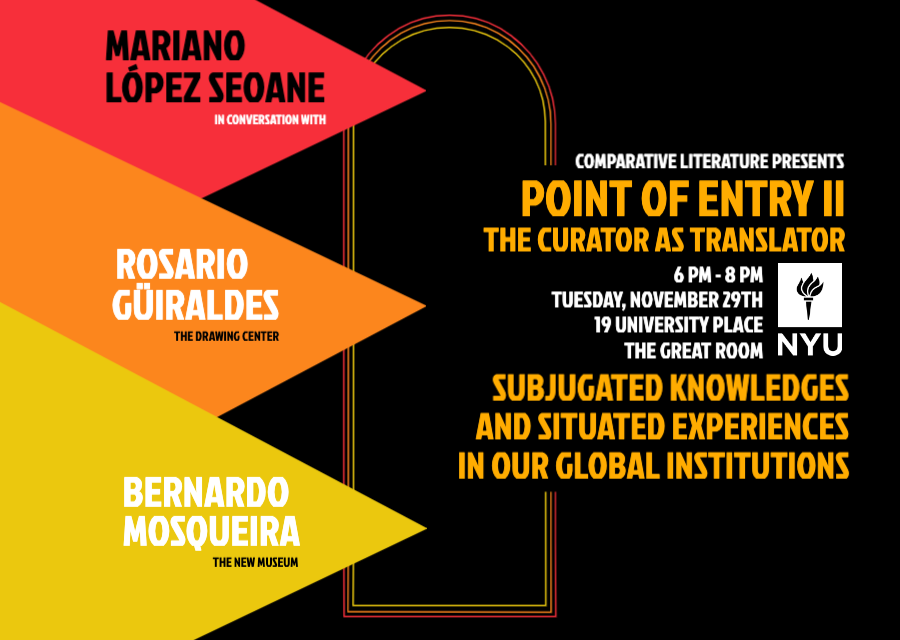 On Tuesday, November 29th at 6 PM, Mariano López Seoane and the Department of Comparative Literature will host Rosario Güiraldes and Bernardo Mosqueira for a conversation titled Point of Entry II: The Curator as Translator - the second installment in the Fall 2022 series Subjugated Knowledges and Situated Experiences in Our Global Institutions!

This in-person event is open to the public - advanced registration and proof of compliance with NYU's vaccination policy is required for non-NYU visitors. Instructions for accessing campus will be sent to you upon registration: RSVP HERE

It is increasingly clear that the experiences and knowledges of vulnerable communities and peripheral cultures can be a source of value for global institutions. Museums, universities, film festivals and publishing houses in New York, London, Paris and Berlin routinely program shows and events, and include films and writers that stand in representation of an entire marginalized national or subcultural collective. In words that resonate with our own critical glossaries, the inclusion of native informants of different sorts has become de rigueur in any institution or event that aspires to be current, relevant and unproblematically “critical”. Rather than questioning this state of affairs as mere trend, this series of panels would like to explore the effects this problematic inclusion has on the subjects and cultures invited to join the global conversation. As more and more cultural agents, artists and intellectuals that act “in representation” enjoy the benefits of this metropolitan curiosity, this series of conversations would like to explore modes of negotiation, cunning strategies, possible qualms and even regrets. What is the price of entry to global institutions? What experiences and knowledges can be exchanged for this inclusion?

This conversation will reflect on how experiences, knowledges and styles embodied by Latin American art come to be showcased and institutionalized in global art museums today. Rosario Güiraldes works as a curator at the Drawing Center and has just opened a show devoted to Fernanda Laguna, a queer and very opaque artist from Argentina. Bernardo Mosqueira works at the New Museum and has curated different shows bringing artists that work with the afro-brazilian spiritual tradition. They will reflect on the type of adjustments/negotiations these "minor" works (after Deleuze) have to go through in order to become readable in these very formal institutional contexts.

Rosario Güiraldes is a curator from Argentina currently based in New York City. She is the Associate Curator at The Drawing Center. Recent and upcoming exhibitions curated at The Drawing Center include the contemporary drawing survey Drawing in the Continuous Present (2022), with Michael Armitage, Christine Sun Kim, Helen Marten, Walter Price, and others; 100 Drawings from Now (2020); The Pencil is A Key: Drawings by Incarcerated Artists (2019); and monographic exhibitions by Xiyadie (2023); Fernanda Laguna (2022); Ebecho Muslimova (2021); and Guo Fengyi (2020). In 2017, she organized Forensic Architecture: Towards an Investigative Aesthetics; a major survey of interdisciplinary collective Forensic Architecture that toured the Barcelona Museum of Contemporary Art (MACBA) and the University Museum Contemporary Art (MUAC) in Mexico City earning Forensic Architecture a Turner Prize nomination. Güiraldes holds an MA from the Center for Curatorial Studies (CCS Bard) and is a Visiting Critic in the Department of Painting and Printmaking at Yale School of Art.

Bernardo Mosqueira is a curator and writer based in New York and Rio de Janeiro. He is the ISLAA Curatorial Fellow at the New Museum. He is also the founder and artistic director of Solar dos Abacaxis, an institution for experimentation in art, education, and social transformation in Rio de Janeiro, and since 2011 he has directed Premio FOCO ArtRio, a national award for emerging artists. Mosqueira previously organized the performance festival Venus Terra and worked as a curator at Galeria de Arte Ibeu. Mosqueira has been curating exhibitions, editing books, teaching, and contributing texts to art publications since 2010; was awarded the Premio Lorenzo Bonaldi in 2017; and cofounded Fundo Colaborativo, the first emergency fund for artists in Brazil, in 2020. His recent exhibitions include Miriam Inez da Silva at the Museu da República, Brasília (2021); Castiel Vitorino Brasileiro: Eclipse at the Hessel Museum of Art in Annandale-on-Hudson, NY (2021); and Daniel Lie: Unnamed Entities at the New Museum, New York (2022). 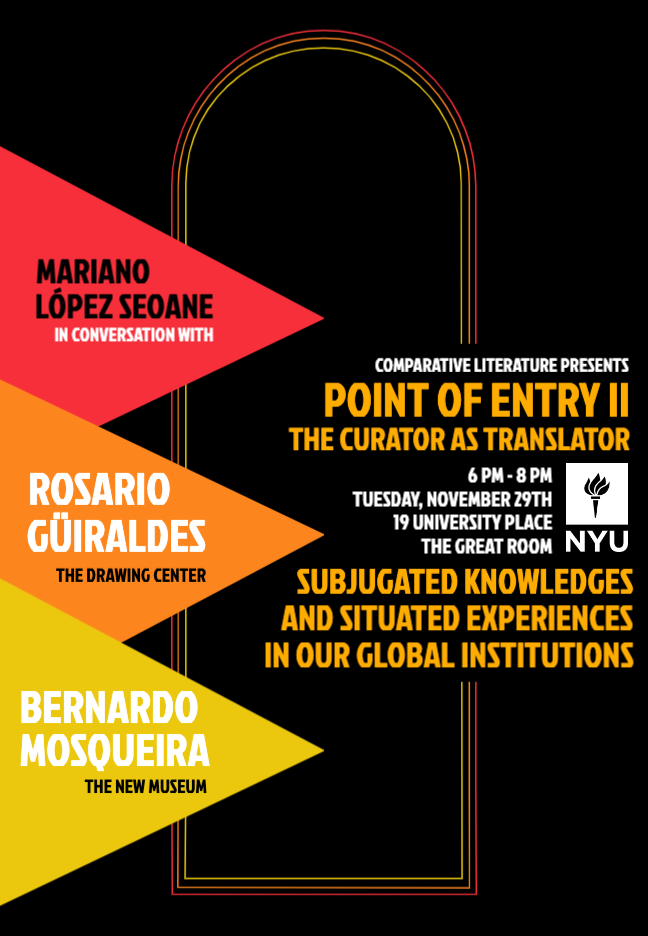