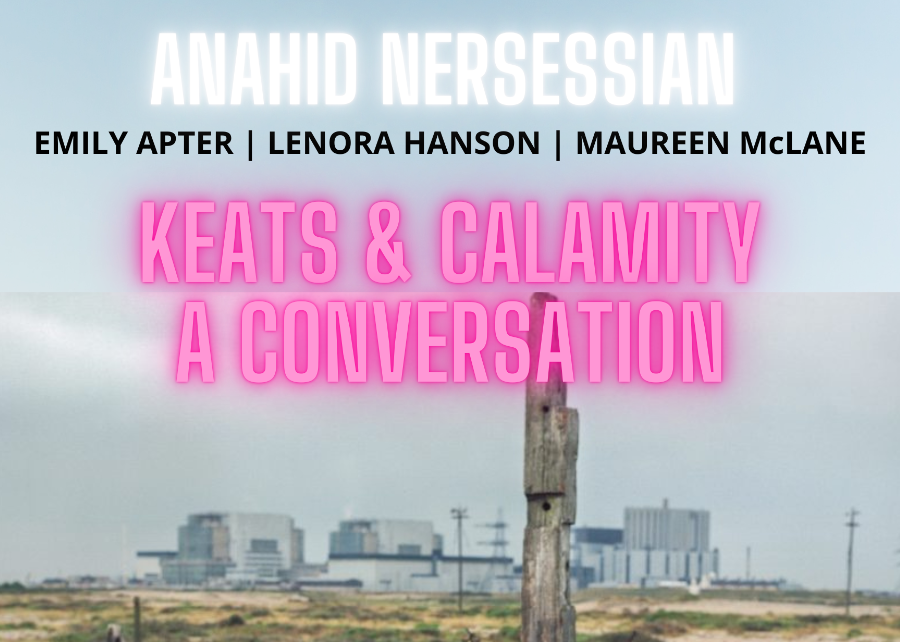 On Wednesday, November 2nd at 6:30 PM EST, the Department of Comparative Literature will host Keats and Calamity, a Poetics & Theory conversation between Emily Apter, Lenora Hanson, Maureen McLane, and Anahid Nersessian about her two new books, Keat’s Odes: A Lover’s Discourse (Chicago, 2021) and The Calamity Form. On Poetry and Social Life (Chicago, 2020)!

This in-person event is open to the public - advanced registration required: RSVP HERE

This event will also be streamed. Click here to register for the Zoom webinar.

On The Calamity Form:

Romanticism coincided with two major historical developments: the Industrial Revolution, and with it, a turning point in our relationship to the earth, its inhabitants, and its climate. Drawing on Marxism and philosophy of science, The Calamity Form shines new light on Romantic poetry, identifying a number of rhetorical tropes used by writers to underscore their very failure to make sense of our move to industrialization.

Anahid Nersessian explores works by Friedrich Hölderlin, William Wordsworth, John Keats, and others to argue that as the human and ecological costs of industry became clear, Romantic poetry adopted formal strategies—among them parataxis, the setting of elements side by side in a manner suggestive of postindustrial dissonance, and apostrophe, here an address to an absent or vanishing natural environment—as it tried and failed to narrate the calamities of capitalism. These tropes reflect how Romantic authors took their bewilderment and turned it into a poetics: a theory of writing, reading, and understanding poetry as an eminently critical act. Throughout, Nersessian pushes back against recent attempts to see literature as a source of information on par with historical or scientific data, arguing instead for an irreducibility of poetic knowledge. Revealing the ways in which these Romantic works are of their time but not about it, The Calamity Form ultimately exposes the nature of poetry’s relationship to capital—and capital’s ability to hide how it works.

“When I say this book is a love story, I mean it is about things that cannot be gotten over—like this world, and some of the people in it.”

In 1819, the poet John Keats wrote six poems that would become known as the Great Odes. Some of them—“Ode to a Nightingale,” “To Autumn”—are among the most celebrated poems in the English language. Anahid Nersessian here collects and elucidates each of the odes and offers a meditative, personal essay in response to each, revealing why these poems still have so much to say to us, especially in a time of ongoing political crisis. Her Keats is an unflinching antagonist of modern life—of capitalism, of the British Empire, of the destruction of the planet—as well as a passionate idealist for whom every poem is a love poem.

The book emerges from Nersessian’s lifelong attachment to Keats’s poetry; but more, it “is a love story: between me and Keats, and not just Keats.”  Drawing on experiences from her own life, Nersessian celebrates Keats even as she grieves him and counts her own losses—and Nersessian, like Keats, has a passionate awareness of the reality of human suffering, but also a willingness to explore the possibility that the world, at least, could still be saved. Intimate and speculative, this brilliant mix of the poetic and the personal will find its home among the numerous fans of Keats’s enduring work.

Anahid Nersessian is Professor of English at the University of California, Los Angeles. She is the author of Utopia, Limited: Romanticism and Adjustment, and the coeditor of the Thinking Literature series, published by The University of Chicago Press.

Lenora Hanson is Assistant Professor of English at NYU.

Emily Apter is Silver Professor of French Literature, Thought and Culture, and Comparative Literature at NYU. 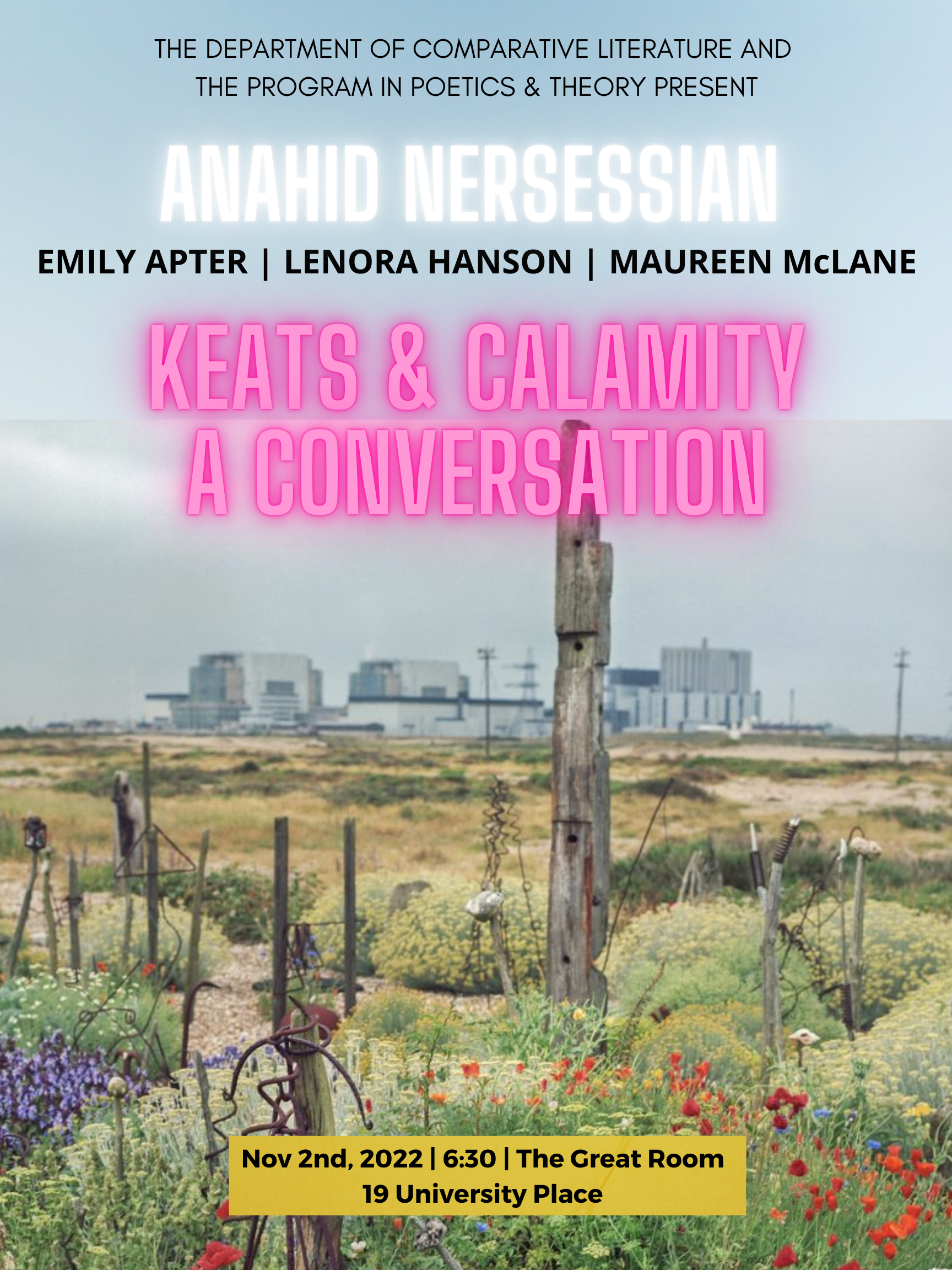